The Greek and Roman antiquities owned by the Diniacopoulos family range in date from the prehistoric to the Greek and through the late Roman periods, and cover a myriad of artforms and media: unpainted and painted pottery; large and small-scale sculpture in terracotta, metal, and stone; relief sculpture; and glass and metal vessels. This collection has been split up over time, with many pieces sold to collectors and museums around the world. 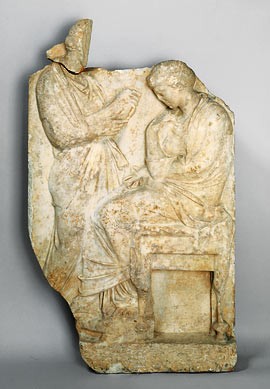 Despite the widespread dissemination of the Diniacopoulos collection, a large portion of its Greek and Roman artifacts remains in Canada. The largest group of these pieces, comprising 74 objects, was purchased by the ministère des Affaires culturelles du Québec and subsequently housed in the Centre muséographique of Université Laval in Quebec City. This collection was published in a brief catalogue (1983) by Gisèle Deschênes-Wagner, but aside from sporadic visits by scholars interested in studying individual pieces, the collection had been neither systematically published nor exhibited as a whole. It remained largely unknown, even within Quebec. In 2002, the collection was moved to the Musée national des beaux-arts du Québec, and in 2003 it came to the Montreal Museum of Fine Arts on a long-term loan by agreement with the Musée national des beaux-arts du Québec.

These artworks were presented to the public in 2004 both as exhibitions in the Mediterranean Archaeology gallery of the Montreal Museum of Fine Arts and as a two-day conference held at Concordia University; the proceedings of this conference that addressed the Quebec collection were published in this year (John M. Fossey and Jane E. Francis, The Diniacopoulos Collection in Quebec).

In 2001, Queen’s University acquired a small assemblage of artifacts from the Diniacopoulos Collection. These represent fragmentary painted and unpainted pottery, sculpture, and coins from across the Mediterranean, and span the Bronze Age through late Roman. These artifacts have formed the basis several MA thesis projects, and also serve as tools for the students in art conservation for the cleaning and restoration of ancient objects.

The 2004 conference at Concordia also included speakers from Queen’s University who presented material in their own collection.

The Royal Ontario Museum acquired several fragments of Greek vase painting from the Diniacopoulos collection, including a lebes gamikos attributed to the Washing Painter. This vessel was presented at the 2004 Concordia conference.

Other Greek and Roman material

Sold at auction were a small number of other Greek and Roman artifacts. Greek objects included a bronze hydria dated to the late 6th cent. BCE, an Attic oinochoe from the Classical period, a statue of a beardless Herakles in limestone, also Classical, and an Orientalizing bronze fibula. Roman material was varied: terracotta lamps, sigillata and red slip pottery, a selection of fragmentary marble sculptures, a table support, and a relief tondo. Romano-Egypto objects were a pair of limestone sphinxes and a polychrome female funerary bust. There were also two Etruscan bronze mirrors with relief designs.