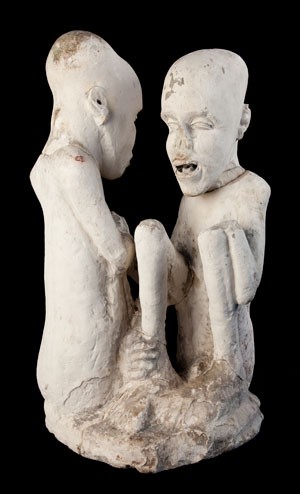 The Starving of Saqqara
Photo by Concordia University

Grotesque or beautiful? Priceless or worthless? Rare antiquity or outright fake? For more than a decade Concordia University has investigated the origins of a mysterious sculpture. Once part of the Diniacopoulos Collection of Mediterranean antiquities, it has been in the university's possession since 1999.

The 67-centimetre-high limestone work, with traces of pigments, depicts two nude seated figures with large heads. It also features inscriptions in what appears to be an ancient yet unidentified language.

So far, no authority has been able to confirm the sculpture's pedigree.

"One specialist commented that if it can be proven to date to the period when the Jews were exiled from Egypt, it could be one of the rarest finds of its kind," says Epstein. "Another archaeologist suggested the statue was either from a predynastic tomb or was an outright fake."

Vincent and Olga Diniacopoulos, who amassed a collection now dispersed in museums and private collections the world over, brought the work to Canada. Identified as The Starving of Saqqara, the sculpture was exhibited in the 1950s at their family-owned Galerie Ars Classica on Sherbrooke Street in Montreal. The name Saqqara refers to the vast burial ground in the ancient capital of Memphis in Egypt. However, how this region relates to the work or how it received the name remains part of the mystery.