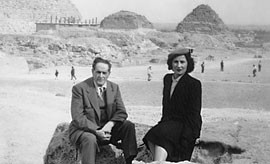 Vincent and Olga Diniacopoulos in Egypt

The antiquities collected by the Diniacopoulos family have a long history in Quebec, from Vincent and Olga Diniacopoulos’ arrival in Montreal in 1951 with crates of artifacts to their subsequent acquisitions and exhibitions at several venues around the city; to the eventual deposition of a portion of their collection in the National Museum of Fine Arts of Quebec nearly a half-century later. The passing of Mrs. Diniacopoulos encouraged renewed interest in the collection, prompted in part by the family’s bequest of scholarship money to Concordia University, where their son, Denis, had long been a faculty member. This university, where the family’s archives are now housed, has been celebrating the legacy of the Diniacopoulos family and their relationship with Concordia through several academic projects focusing on their antiquities collection. In 2004, a collaborative effort between Concordia’s Office of the President, the Classics Section, and the Montreal Museum of Fine Arts produced a two-day conference and publication, edited by J.M. Fossey and J.E. Francis that presented various aspects of the Greek and Roman artifacts. In 2011, Concordia University published a similar volume highlighting the Diniacopoulos family’s Egyptian collection, edited by J.E. Francis and G.W.M. Harrison.

The artifacts in the Diniacopoulos collection represent only a portion of their original holdings, but they nonetheless show wide geographical and chronological spans. Material from ancient cultures of the central and western Mediterranean--Egypt and Syria to Greece, Italy, and Cyprus—date from the Late Bronze Age through the Late Roman period of the 3rd-4th centuries C.E. Artifact types include Greek vases and iconography, Greek, Roman, and Egyptian sculpture, Greek epigraphy, and the minor arts, such as terracotta figurines, small-scale bronzes, and glass.

More about the family and their antiquities collection

The family owned an art gallery on Sherbrooke Street in Montreal, Ars Classica, and continued to buy and sell artifacts until the death of Vincent in 1967. Despite this venture, their antiquities collection was little known in Canada. An exhibition at the Seminaire de Valleyfield in 1954 represents a rare occasion when the public was able to view a selection of the objects.

The dispersal of the collection in Canada began in 1964, when the family sold a group of 74 Greek and Roman artifacts to the Affaires culturelles du Québec, which were long housed in the Musée national des beaux-arts du Québec, in Quebec City.

Towards the end of her life, Olga Diniacopoulos asked Concordia University to assist with the management of the antiquities collection, with a portion of the funds destined for student scholarships, in large part due to her son’s career at the University as a professor of Communication Studies. Some of the artifacts were acquired by Canadian institutions: statues from Thebes and a few Greek red-figure vases were acquired by the Royal Ontario Museum; and the Art Conservation program at Queen’s University acquired fragments of painted Greek pottery intended as teaching tools. The remainder of the collection was dispersed in the late 1990s through Sotheby’s (New York) and Fragments of Time (Boston).

The Greek and Roman artifacts from Quebec City were brought to Montreal (Musée des beaux-arts) in 2003 and published jointly by the Museum and Concordia University. Aspects of tthe extensive collection of Egyptian artifacts will be published by Concordia University in 2011. This website endeavours to present the entirety of the Diniacopoulos’ antiquities collection, including material published nowhere else.

Articles about the family