The Egyptian antiquities owned by the Diniacopoulos Family range in date from the pre-dynastic period up to and including the Coptic (Christian) period. All major periods are represented, with the largest emphasis on the Old Kingdom. 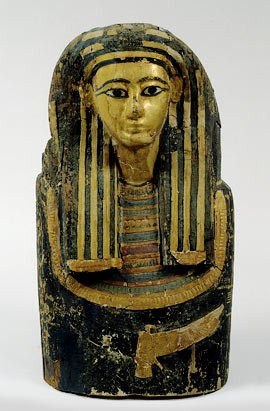 Only one life-size coffin was in the possession of the Diniacopoulos Family at the time the collection was managed by Concordia University. They showed a clear preference for small objects over large, and a preference for stone, particularly alabaster, over ceramic and metal. The few items of cloth belong to the Coptic period.

Given that the Diniacopoulos Family was resident in Alexandria and collected most extensively in Egypt, it is not surprising that many objects of the Greek and Roman periods would appear to be Greco-Egyptian or Romano-Egyptian. Much of the Greek material is archaic and belongs to the period when Greek mercenaries were keeping the late Libyan dynasties in power.

The pre-dynastic period is represented principally by gray ware and Nqada III red-on-cream ceramics, while the several limestone reliefs and fragments of statues represent the Middle Kingdom. The Late Period and Roman Empire are particularly rich in religious objects such as the painted coffin, portable altars, commemorative columns, ibis mummies and a caduceus that is more likely to be associated with Mithras worship than Mercury.

The richest part of the collection, however, are serdab statuettes, that is,one-quarter to more than half-life size statuettes of scribes and servants to help the deceased in the Land of the West. There are many stone examples from the 5th and 6th Dynasties, including one seated couple, as well as a group of eleven wooden funereal statuettes from the First Intermediate period.