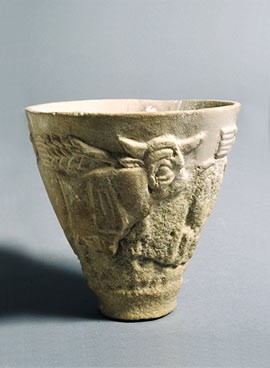 The civilizations of the ancient Near East, namely Sumer, Akkad, Babylon, Hittites, and Luristan, among others, are poorly represented in the antiquities owned by the Diniacopoulos Family. There does not seem to have been any attempt at thorough or systematic collection by culture or even by artifact class. These objects instead appear to have been random purchases; even the largest single group, Syro-Palestinian ceramic vases, could have been a fortuitous buy or chance acquisitions over a number of years. Vincent Diniacopoulos started collecting when he was in the Turkish army before Ataturk, and he made trips to several parts of the Near East, even though most of his professional activity was based in Alexandria.

Detailed records of the provenience or even place of purchase of these artifacts would have greatly enhanced their academic usefulness. In its periods of greatest power, Egyptian imperialism advanced north along the east coast of the Mediterranean and came into collision with its Near-Eastern neighbours. Egyptian material was collected as souvenirs on campaign in modern Iran, Iraq, and Syria, and it may be that at least some of the Near Eastern objects from the Diniacopoulos collection were found at such sites and acquired by the family alongside Egyptian artifacts. With one or two exceptions, all of this material is easily portable: cylinder seals are as ubiquitous as Egyptian scarabs, and as useful for dating. The same can be said of the two inscribed foundation cones and cuneiform tablets, and also amulets, again as frequent as Egyptian amulets in comparable contexts. Weapons, horse traipsings, vessels, and bracelets all travel easily.

The expertise and greatest interest of the Diniacopoulos family was in Egyptian and most especially Greek art. The Near-Eastern antiquities impress on the whole as antiquities, such as the Syro-Palestinian vases, that bear strong visual similarities to Greek objects. Two, in particular stand out, a Persian bracelet that may well be of east Greek manufacture and a bone plaque, probably also destined for a Persian buyer, once identified as Bes, a plump, coarse Egyptian fertility deity, but more probably Greek Silenus, a rotund, drunken satyr.