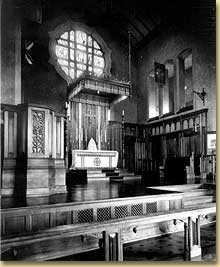 There has been a chapel on the west end campus since Loyola College first built there.

In the original Loyola College building plan of 1913, the chapel was intended to be where the Central Building currently stands. Money was in short supply in the early Loyola days and building projects happened as money became available. When the campus first opened in 1916, the student chapel was housed in the east wing basement of the Junior or High School Building (now the Psychology Building). Local residents soon began attending mass in the Loyola chapel, and in 1917 an English Roman Catholic parish was formally established and run by the Jesuits. It was only in the 1930s that the funding was finally available to build a separate chapel building for the College which would also serve as the parish church. The Loyola Rector at that time, Thomas McMahon, S.J., decided not to follow the original campus block design, but to place the chapel facing Sherbrooke Street and the larger community.

The Loyola Chapel building was designed by Architect Henri Labelle, and it fits well with the style of the original Loyola buildings of 1916--the Administration Building, the Refectory, and the Psychology Building (formerly known as the Junior or High School Building). The chapel was blessed and officially opened on April 2, 1933. It was built in memory of Charles Francis Smith and Margaret McNally, the parents of Francis C. Smith, S.J. When Father Smith, a Loyola graduate, took his final vows of poverty in the Jesuit order, some of his family inheritance was put towards the building of the long-awaited Loyola chapel and auditorium. The auditorium was named in his honour after his death. The downstairs auditorium was completed in 1934, followed by the foyer seven years later. The auditorium was the main venue for Loyola productions of various kinds until the Concert Hall was opened in 1990, and it has been a popular west-end site for theatre, film, concerts, and recitals, including a performance by Thelonius Monk. 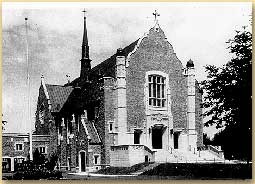 The building continued to serve as both a chapel for Loyola College, and a church for St. Ignatius Parish until the opening of a separate, new parish church building on West Broadway in 1967. The church was erected by the parish on land sold to them by Loyola College in 1964. Since 1982 the Jesuits have not been responsible for the parish.

The Loyola chapel steeple rises 132 feet. The doors are red oak, but they have been painted grey on the outside. The stone decorations on the building include the Jesuit IHS emblem above the front door, the Loyola shield over the west entrance to the auditorium, and theatre symbols over the auditorium east entrance.

There are three plaques in the chapel vestry giving a little history of the building The chapel´s high vaulted ceilings are lined with heavy beams of BC fir. The chapel contains new colours layed up in 1976 for the Duchess of Connaught‘s Own Irish Canadian Rangers. This was a WWI regiment founded in 1914 and raised by Loyola men in 1916, which was broken up in 1917. The current colours replaced the original colours, which were brought to the Loyola Chapel in 1933. The Duchess of Connaught was the patron of the regiment, which was formed when her husband, the Duke of Connaught, was Governor General of Canada.

The stained glass windows include the chancel window dedicated to the four Evangelists, and two rose windows in the transepts dedicated to the Sacred Heart (west side) and the Virgin Mary (east side). Over the main door, there is a window dedicated to the Canadian Martyrs, a gift of the surviving Irish Canadian Rangers, erected at the time of the chapel construction, in memory of the officers and men of the regiment. The large central panels and two of the smaller central panels of this window portray the eight martyrs. The upper left panel depicts the seal of the Jesuit Order, and the upper right panel is the Irish Rangers‘ regimental badge, while the two corner panels at the bottom are the Coat of Arms of the Loyola and Onaz branches of the family of Saint Ignatius, founder of the Jesuits, which were combined in various ways over the years to form the unofficial crest of Loyola College. The panels for the current altar (installed in May 1999) were hand carved in walnut by Robert Nagy, a past Concordia chaplain, who also made the processional cross which is in a stand behind the altar.