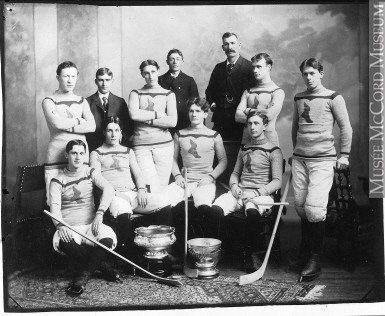 On March 14, 1899, and again on March 7, 1900, three Loyola pioneers starred with the Montreal Shamrocks as the team won the Stanley Cup in two consecutive years.

In 1893-4 Harry Trihey (Captain), Arthur Farrell and Jack Brannen were a force on the hockey team at Collège Ste-Marie, out of which came Loyola College, one of the founding institutions of Concordia University.

The Shamrocks won the Stanley Cup on March 1,1899 by defeating the Montreal Victorias 1-0 before 8,000 people in the new Montreal arena at the corner of Wood and Ste-Catherine streets. On March 14 they defended the cup 6-2 in a challenge from Queen’s University. In a February 4 lead-up game the Shamrocks beat Quebec City 13-4, with team captain Trihey scoring 10 goals--a truly amazing record for Stanley Cup play.

The Shamrocks won the Cup again in 1900 when they defeated the Winnipeg Victorias on February 16, and successfully defended the title against Halifax on March 7, 1900.

In 1899 goal nets were used for the first time and later that year the rules of hockey were modified by Farrell and Trihey. Players could no longer lift the puck and there was greater emphasis on stick-handling.

As hockey moved into the 20th century, the coveted Stanley Cup occupied a prominent place in the Montreal Shamrocks’ clubhouse.

Jack Brannen, known as the fastest skater of his day, went on to fight in World War I and became a physician. Team captain Harry Trihey was the principal organizer of the 55th regiment of the Irish Rangers, and later became a prominent Montreal lawyer and businessman. Arthur Farrell died a young man. Besides the power line of forwards Trihey, Brannen and Farrell, the team included Charles Hoerner, Jim Mckenna, Fred Scanlan, Frank Tansey, Frank Wall. Barney Dunphy was coach.