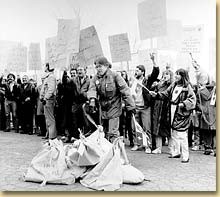 In the late 1980s, Quebec universities suffered from great financial problems. Many had ponderous deficits. Despite promises from the Quebec Liberal government to freeze university tuition fees "for the next two to three years," students were threatened with substantial tuition hikes.

The funding formula established in the late 1960s had inequities that disadvantaged Concordia University. Due to chronic underfunding over two decades, by 1987, Concordia was operating with an accumulated deficit of $31.5 million, 40 per cent of the combined Quebec universities deficit that year.

In 1987, Higher Education and Science Minister Claude Ryan allotted Quebec universities an additional $40 million to help them deal with the financial crisis. Only $4.8 million of this amount was given to Concordia.

Faced with underfunding from the provincial government, one of the province's highest deficits, and the possibility of having to double tuition fees, the Concordia community came together to organize a day of protest. Called the "Day of Action," the rally included a letter- writing campaign to Ryan, Quebec Premier Robert Bourassa and local MNAs, and sending a protest delegation to the National Assembly in Quebec City.

On November 17, 1987, a delegation that included Concordia Rector Patrick Kenniff and student association co-president Maxine Clarke boarded a bus to meet with Ryan. They brought with them over 10,000 letters protesting the allocation of funds, and about 1,000 supporters who accompanied the delegation by bus and car.

While the Concordia delegation spoke with the Education minister, hundreds of students, faculty and staff in Montreal held public demonstrations. Quebec government offices were inundated with calls and letters from protesters.

Although Claude Ryan refused to reallocate funding to help ease financial problems at Concordia that day in 1987, base funding for the university has increased since then, and since 1990, Concordia University has been funded at a rate close to the average of other Quebec universities.