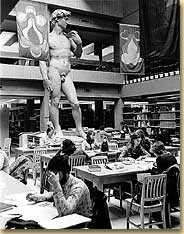 In 1965, Simpson‘s Department Store gave the Fairview Shopping Centre an exact replica of Michelangelo‘s Statue of David, to commemorate the opening of Fairview in Pointe Claire. There was a public outcry from some people, and a public debate ensued about the appropriateness of such a display of male nudity in a shopping plaza. The statue had been made in Italy as part of a New York City Department Store promotion, and it was purchased by Simpson‘s, along with statues of Moses, Romulus, and Remus, for more then $10,000. In January 1966, the General Manager of Simpson‘s donated the statue of David to the Loyola Students Association, and the 4.1-metre plaster replica with metal re-enforcements, was installed on a pedestal in the Vanier Library. It became a familiar landmark on the Loyola campus, and was the object of a number of student hi-jinks over the years, including painting it emerald green for St. Patrick‘s Day, in March 1966, and adorning it with fig leaves, hats, banana peels, and diapers. On the night of March 20, 1987, after being lassoed with a fire hose, the statue was toppled from its pedestal and destroyed by vandals, possibly a student prank gone awry.