By the late 1950s, Sir George Williams held classes in any available rental space near Drummond and de Maisonneuve (then a two-way street called Burnside). Evening students were turned away for lack of classroom space. 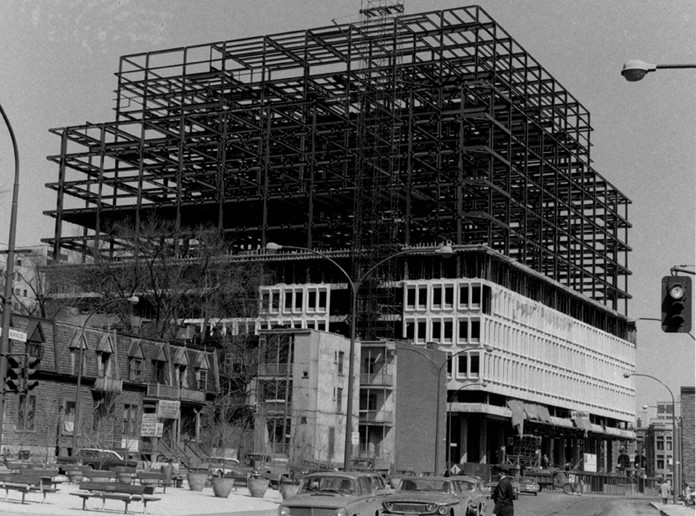 (In 1962-63 SGW part-time students were a staggering 72 percent of the student body; in 2003-04 they are 32 percent). Downtown land was expensive, so the perennially poor SGW decided the building should rise up not out. The Hall Building is a utilitarian l960s high-rise university building, designed by architects Ross, Fish, Duschenes & Barrett, and made of pre-fabricated stressed concrete. The new compact cube-shaped structure held a remarkable 18 acres of space and it included a Computer Centre, specialized laboratories, state-of-the-art audiovisual facilities, extensive classroom space, and escalators to efficiently move people through the building. It was even wheelchair accessible, a major innovation at the time. It was 5.5 times the size of the Norris Building. The land, building, and initial contents cost $27.5 million ($6 million from the Building Campaign, the rest from government). Building estimates were higher than available money, so planners eliminated features we still miss today, such as additional elevators, down escalators from the twelfth to ninth floors, exterior lighting to illuminate the building, and virtually all cosmetic finishing. 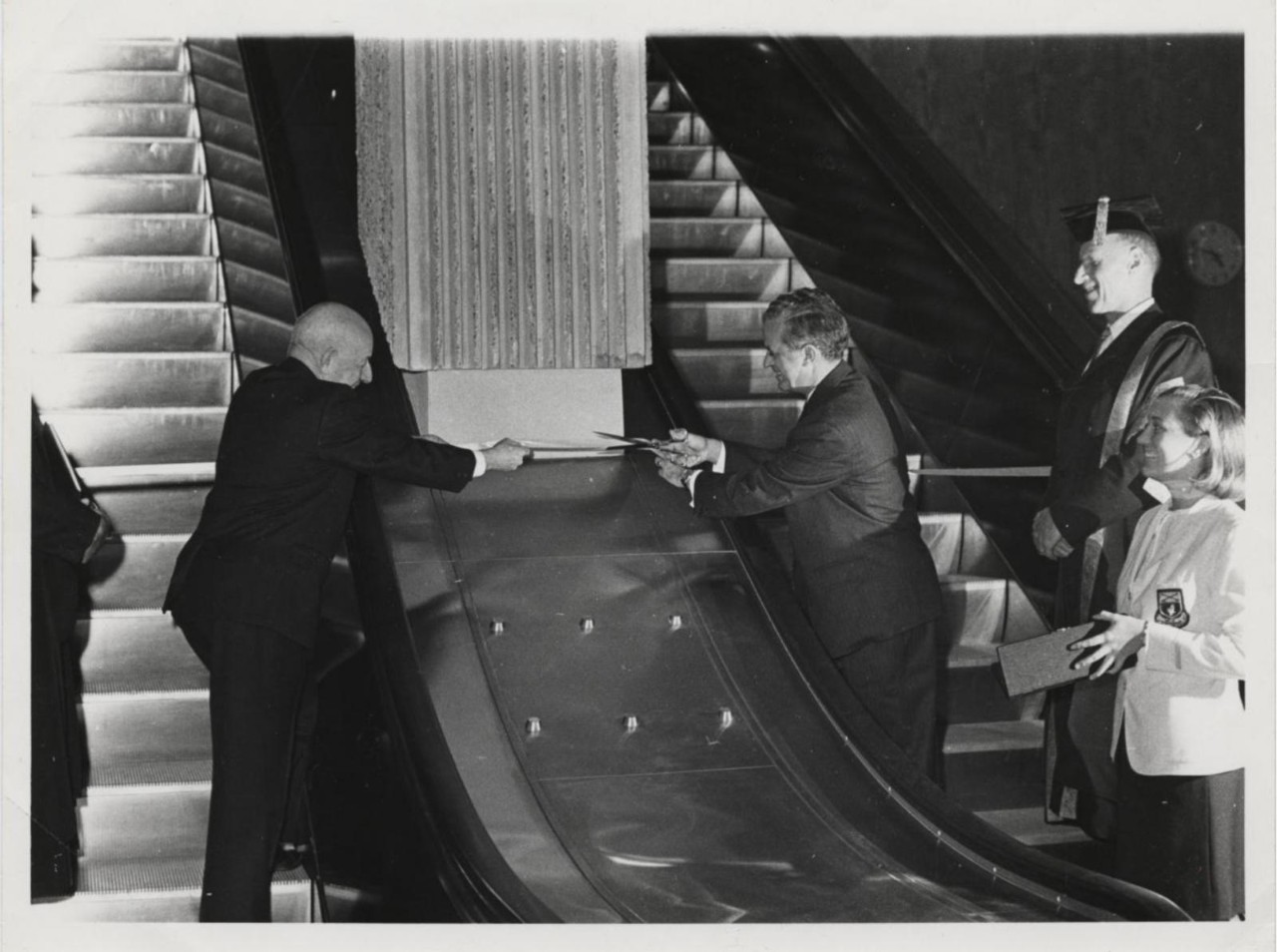 Ribbon-cutting ceremony at the official opening of the Henry F. Hall Building, October 14, 1966. Left to right, Principal Emeritus Henry Hall, Minister of Education Jean-Jacques Bertrand, Chancellor Fraser Fulton, and a member of the Garnet Key. I180-02-02

The official opening of the Hall Building in October 1966 was also the inauguration day of the Montreal Métro, and close to 5,000 Montrealers visited the building that day to celebrate with the SGW community this tangible evidence of the dramatic growth of Sir George from a small YMCA school to a respected university where so many got their first chance at higher education. The building is named after Dr. Henry Foss Hall (1897-1971), Student Counsellor (1926), gifted teacher (1932-62), Dean (1935-57), Principal (1957-62), and finally Principal Emeritus. In 1994-95 the exterior of the building, damaged by time, acid rain and the elements, was cleaned and painted, and windows were repaired; other major repairs took place in 1998-99. Nearing forty, the big cube is getting well-deserved renovations and updating. The eighth floor got a spiffy facelift in 2003-04 ($3.1 million) and the tenth, eleventh and twelfth floors will be done by 2006 ($11.5 million). A ventilation system upgrade in 2004 will cost $3.5 million. The building will soon once again feature state-of-the-art media-equipped classrooms and will eventually house the Social Sciences, undergraduate Engineering, and the Dean of Students. The exterior will remain unchanged but will soon be illuminated. The future of the former Biology greenhouse is under consideration. 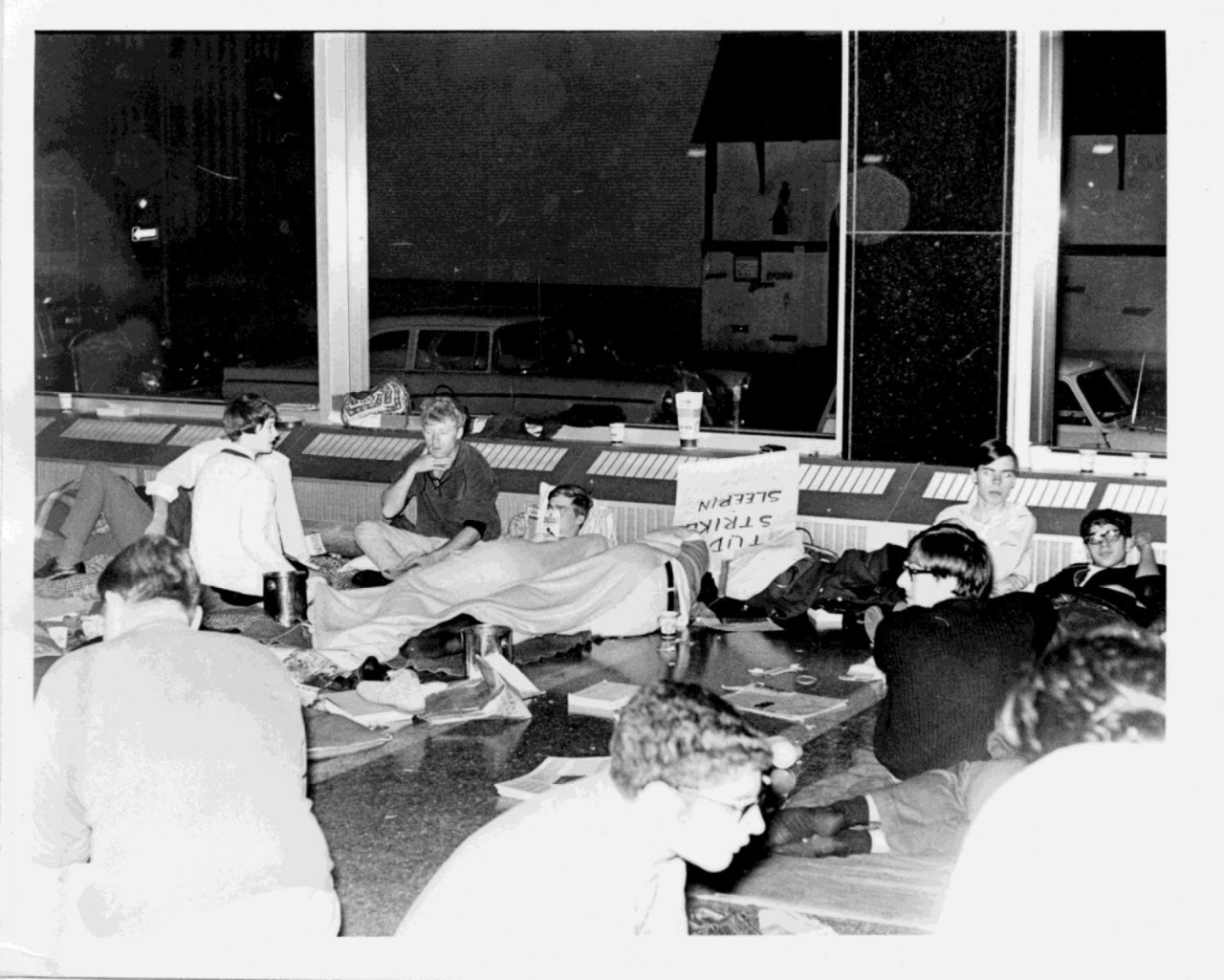 There have been times of both happiness and great sadness in the Hall Building--protests, celebrations, debates, and demonstrations, some peaceful, some not. The ninth floor was the scene of the Computer Riot in 1969, and the murder of four faculty members in 1992. The permanent art installation, a memorial to the people killed in the building, brought four large granite tables to the lobby. There were violent clashes in September 2002 between pro-Israeli and pro-Palestinian groups. Since 1966 countless students and staff, and the general public, have attended lectures, religious and ethnic celebrations, performances, and films, have eaten in the cafeteria and visited the rooftop greenhouse. Montreal’s first university art gallery opened here. Painted glass windows installed on the east side of the mezzanine were commissioned from eminent Montreal painter Jean McEwen (1923-99). The Douglass Burns Clarke (1908-80) Theatre is dedicated to a member of the first SGW graduating class of 1937, who was also a teacher, Registrar, Vice-Principal, and Acting Principal of SGW; he believed the University should play an important role in the cultural life of the community. Thousands of people stream in and out of the building and onto its generous sidewalks daily and it is a part of the fabric of Downtown Montreal.