Construction of the west-end campus of Loyola on the old Decary farm began in 1913. The first students moved there in 1915 even before the buildings were completed, although it was 1916 before the move was complete. 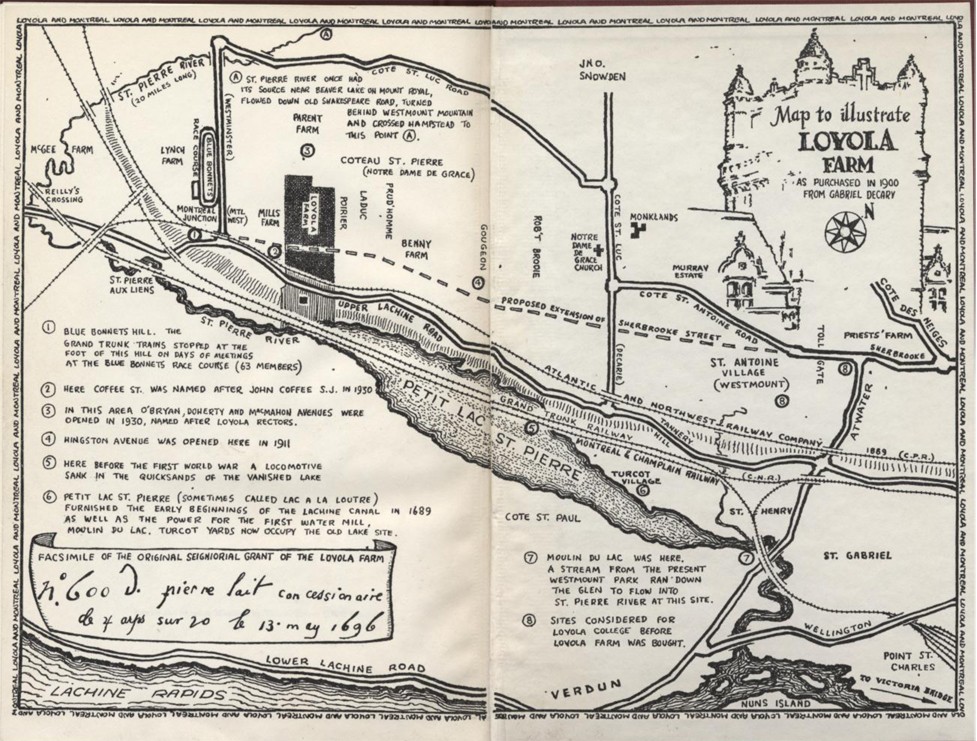 “Map to Illustrate Loyola Farm as Purchased in 1900 from Gabriel Decary,” by T. P. Slattery, used in his book Loyola and Montreal, Montreal: Palm Publishers, 1962. 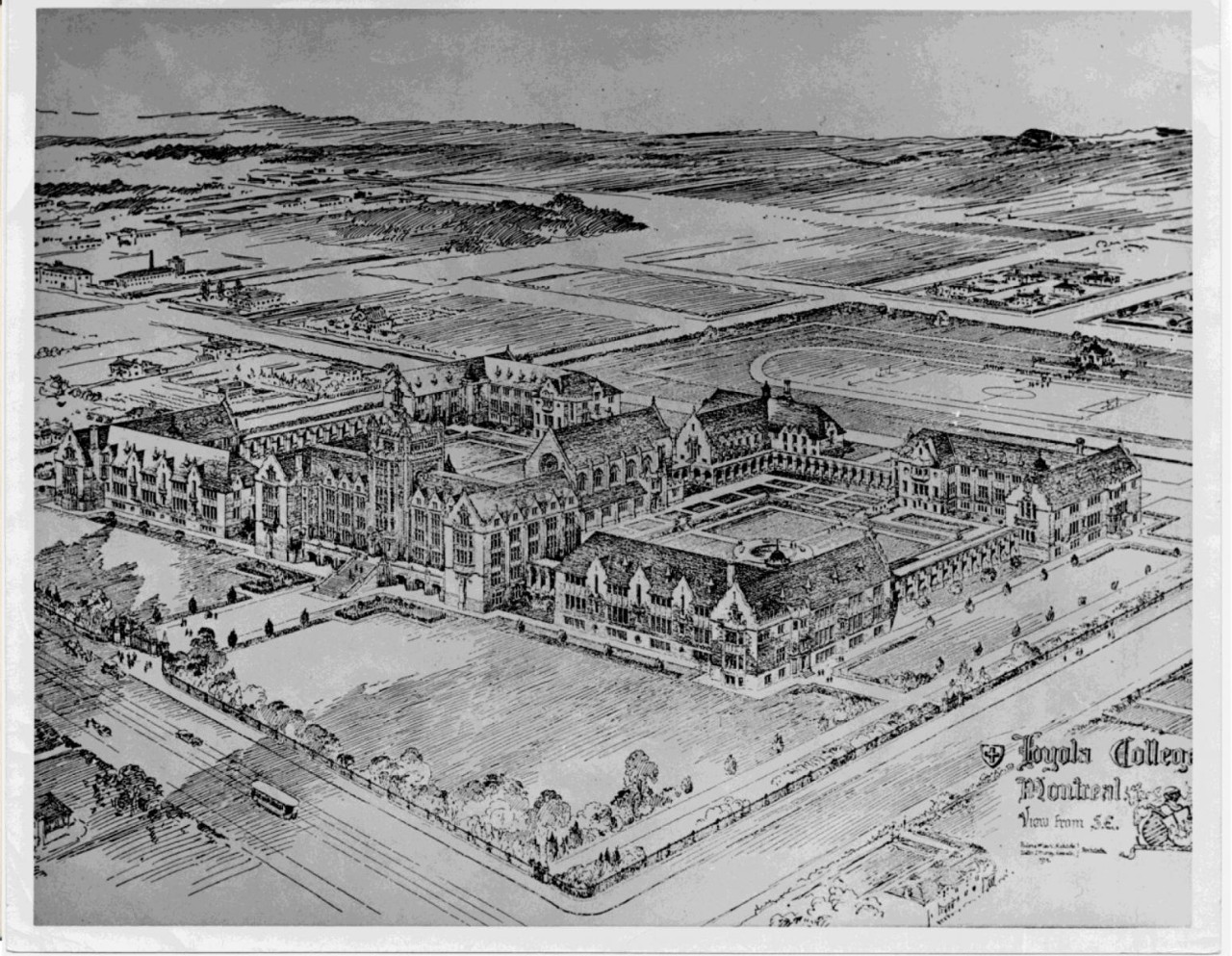 Architect's original conception of the Loyola Campus, view facing the campus from the south-east on Sherbrooke Street. Design by Architects Peden & McLaren, 1913. I007-02-55

The heavy oak doors to the Loyola Administration Building main entrance are a close copy of those in St. Mary´s, Oxford; they were refurbished in 2003. The building has many wonderful details including beautifully carved wooden handrails. The Administration Building joins the chapel via a hallway to the right of the main lobby. The rooms on the south side of this hallway were living facilities and visiting parlours for the St. Ignatius parish priests before the separate parish church was built on West Broadway in 1967. The Jesuit community administered and taught at Loyola and until they moved to the newly constructed Jesuit Residence on West Broadway in 1969 they lived and had a chapel on the second floor of the Administration Building. The third floor housed student bedrooms until the Hingston Hall residence opened in 1964. A 1963 fire in the tower caused no structural damage to the building, but it damaged a collection of rare and valuable Inuit artifacts that were given to the College early in the twentieth century by Arctic adventurer Captain Joseph Bernard. The windows in the Administration, Refectory, Psychology, Chapel and Central Buildings were built individually and almost every one was a slightly different size; in 1994 the deteriorated windows were replaced ($2 million). 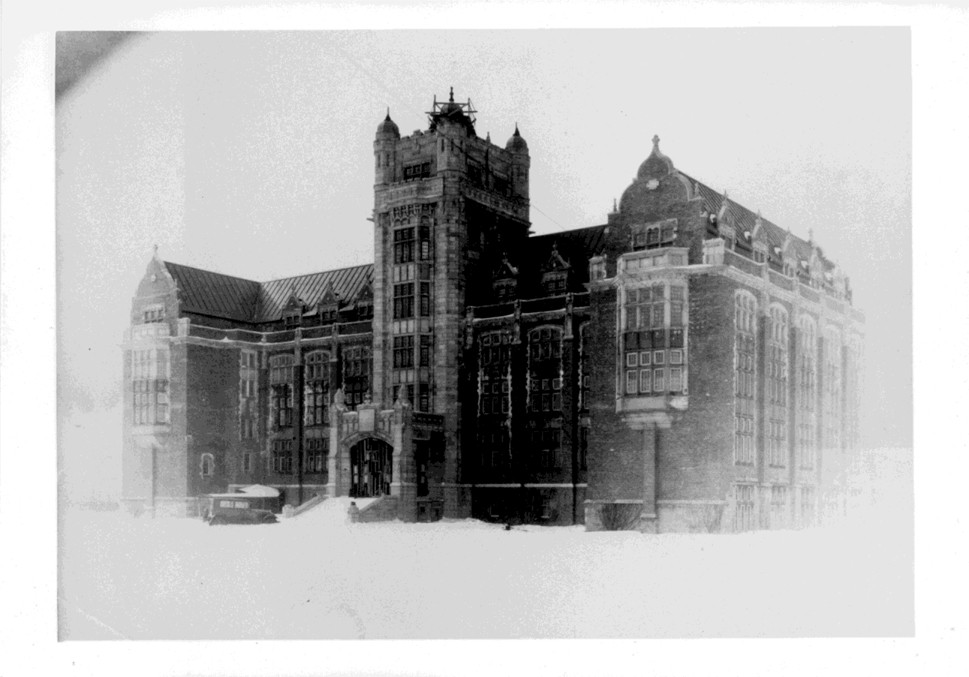 For many decades the Administration Building has been the proud and stately public face of Loyola and now of Concordia. Since 1915 many thousands of students have called it home. It has witnessed many changes. It has seen good times and hard times, student protests, rallies, debate, conflict, and intrigue. It has been the stress point when enrolment figures swelled and space was at a premium. The original abbreviated two-storey version of the Administration Building was inadequate soon after its 1916 opening, and additions to carry out the full original design of the building provided space for growing enrolment as soon as funds became available. The Central Building and the Chapel relieved the pressure somewhat in the 1930s and 1940s. In the early years Loyola had more junior (high school) students than college students, but by 1958-59 it was the reverse. After World War II the college enrolment figures jumped, and in 1957-58 a new extension program increased enrolment even further. By the 1960s every facility was bursting at the seams. An ambitious building expansion plan was developed to keep pace with dramatically increasing enrolment, and the original grand design was finally put aside for more functional and less costly modern buildings.