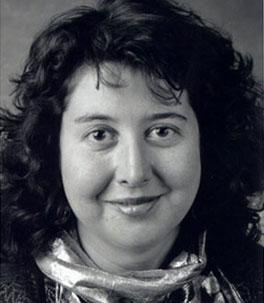 Leila Sujir is an artist and associate professor at Concordia University in the Intermedia (Video, Performance, Electronic Arts) area, where she is also chair of the Studio Arts Department. She is working on new video projections: one on the forests near Port Renfrew on the west coast of Canada, and one continuing her focus on migration.

forest! documents, a stereoscopic 3D video installation in-progress, invites the viewer to walk into a forest of pixels; it is in process, towards an upcoming exhibition in 2023, with  a recent publication by her on this body of work in Journal of Transcultural Studies, March 2021.

A large format video art commission, Aerial, an artistic experiment with IMAX technologies, commissioned by curator Janine Marchessault for Outer Worlds, with the work of four other artists (Oliver Husain, Lisa Jackson, Kelly Richardson, and Michael Snow) and supported by a Canada Council New Chapter grant, launched in Toronto April 18, 2019 at the Cinesphere IMAX at the closing night of the Images festival.

In 2005-2006, Sujir was a Distinguished Visiting Scholar at the University of Calgary, a one year research position as an artist in the Interactions Lab in the Department of Computer Science. Starting in 2011, she began working with Montreal-based Janro's Sandde 3D drawing tool, as the lead researcher on two grants investigating its potential as a performance, drawing, and sculptural tool (CINQ/Mitacs). She has been an artist in residence at the Bath School of Art at Bath Spa University in the UK (2014-2015) where she developed a stereoscopic video projection for a building facade, Elastic City Spacey (January 2015). She was also an artist in residence at the Sydney College of the Arts at the University of Sydney, Australia (June 2013) where she presented at the International Society for Electronic Arts (ISEA), and was an artist in residence at the National Art School in Sydney, Australia (July 2012), as well as at the Banff Centre (Fall 2013 and Winter 2014).

Sujir’s video works have been shown in group shows at the Museum of Modern Art in New York and the Tate Gallery in Liverpool, U.K. as well as galleries and festivals all over the world. New Republics, a group exhibition out of the U.K. toured Canada and Australia 1999-2000 (in Australia to Perth Institute of Contemporary Arts; University of South Australia Art Museum, Adelaide; Canberra School of Art; Australian Centre for Contemporary Art, Melbourne; in Canada to Art Gallery of Alberta, Edmonton; and beginning in the U.K. at Canada House, London). A solo exhibition that has toured galleries in Canada, Luminous Stories, initiated by the Art Gallery of Peterborough, covering ten years of her video art production, toured to A Space, Beaverbrook Art Gallery, Southern Art Gallery and University of Lethbridge Art Gallery.

Select publications on Sujir's art work include the following:
-forthcoming Fall 2021, in a book on Indian art, Moving Focus: Art From India Since 1900,” edited by Mortimer Chatterjee, a guide to Indian modern and contemporary art, featuring over 250 works chosen by a carefully selected group of 50 contributors, each creating a list of five works;
-an essay by curator Haema Sivanesan in Journal of Transcultural Studies, “Unsettling the Picturing of the Canadian Old Growth Forest: Consent, Consultation and (Re)conciliation in Leila Sujir's Forest!" (2021);

-essays by curators Nancy Tousley and Haema Sivanesan in Rebellious: Alberta Women Artists in the 1980’s, a book from the Art Gallery of Alberta, edited by Lindsey Sharman (2020);
-a chapter of a book by curator Nancy Tousley, "Leila Sujir’s forest of pixels,”  in  Intertwined Histories: Plants in Their Social Contexts from the University of Calgary Institute for the Humanities (2019);

-Taking place throughout the month of April, CFMDC enlisted 10 curators/artists to contribute to a symposium, "The Breadth of".This symposium used the CFMDC collection as a starting point to explore themes of challenging dominant historic narratives of art and activism, and examining how our collective histories of media art have been written.

SuperWomen: Conversations with the Real Action Figures is a collection of interviews with seven astounding women who have an extensive history of working in film and video. During the first wave of identity politics, multiculturalism, and at the tail end of the second feminist wave in the late 1980s/early 1990s, there were an increasing number of women artists and filmmakers who explored media production as a creative tool to tell their stories. Across genres, in front and behind the camera, these global voices firmly established an independent filmmaking foundation whose spirit has continued to inspire the next generations. 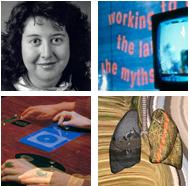 2018, Forest Breath, a stereoscopic video lightbox, for exhibition with curator Haema Sivanesan in the group exhibition, "Supernatural: Art, Technology, and the Forest," at the Art Gallery of Greater Victoria (May 18-September 30).

2016 - in progress, forest! documents, a body of works, with video installation and artist book series, with community screenings for the public, to be presented within a solo exhibition exhibition February 2023; the work is in an experimental research stage.

2021    “SuperWomen: Conversations with the Real Action Figures,” with curator Midi Onodera, in the Breadth of symposium commissioned by Canadian Filmmakers Distribution Centre, April [The Dreams of the Night Cleaners, 1995].

Presentation in a workshop, “Besides the Screen: Transitional Tactics for Moving Image Research,” Network for Cinema and Media Studies (NECS), Transitions: Moving Images and Bodies, University of Palermo, via Zoom Italy, 2021.

Interview and Screening, Dreams of the Night Cleaners(1995), in  “SuperWomen:Conversations with the Real Action Figures,” withcurator Midi Onodera, in the Breadth of symposium commissioned by Canadian Filmmakers Distribution Centre, via Zoom Toronto 2021.

Zool Suleman, “Longing and Belonging: 1990’s South Asian Film and Video,” Rungh for Doxa Festival, May 2019 [The Dreams of the Night Cleaners]. https://rungh.org/projects/longing-and-belonging/

John Luna, "Into the Woods: a review of 'Supernatural: Art, Technology and the Forest,'" Canadian Art (June 6,2018) [Forest Breath].  https://canadianart.ca/reviews/into-the-woods/

Interview for series of podcasts for the South Asian Visual Arts (SAVAC) Archive project, Not a Place on the Map: The Desh Pardesh Project (Fall 2017). https://www.savac.net/collection/desh-pardesh/

Outer Worlds, "A new touring project of commissioned IMAX shorts pushes the boundaries of a medium usually reserved for commercial, action cinema." From Canadian Art, May 23, 2019

"Into the Woods," a review by John Luna, Canadian Art magazine, June 6, 2018, on the exhibition, Supernatural: Art, Technology and the Forest

"Four of FotoFest's dazzling displays focus on Indian portraiture," by Molly Glentzer in the Houston Chronicle, April 13, 2018, a review of the FotoFest Biennale India Contemporary Photographic and New Media Art

Blog post from the Art Gallery of Greater Victoria for community screening in port renfrew, August 2018

The work was in the  traveling exhibition "New Republics," with artists from Canada, South Africa and Australia, initiated in the U.K. by curator Sunil Gupta for OVA [For Leila Sujir, the video, The Dreams of the Night Cleaners, 1995].
It was most recently part of the Doxa festival in Vancouver, May 2019, in the program, Longing and Belonging: 1990s South Asian Film and Video, curated by Zool Suleman.
https://www.doxafestival.ca/essay-longing-and-belonging-1990s-south-asian-film-and-video

The Dreams of the Night Cleaners

Video, 46 minutes, Collections: The Glenbow Museum and Archives, and the National Gallery of Canada.

A road trip, a journey, a voyage through history and memory. A complex weave of drama, archival footage and animation in a fable format to explore the public mythologies in our culture which have had devastating effects on public policy, public attitudes and individual lives. "Dreams" uses storytelling, humour, magic and history to sweep away the misconceptions which haunt the lives of its characters.