Harlan Johnson was born in Halifax, Nova Scotia. He has resided there and more recently in Moncton, Toronto, Vancouver, New York and Montreal. The east coast and it's ocean remains a place of return which recent work has reflected.

In Montreal, his university studies at Concordia attuned him to the modernist aesthetics of painters such as John Fox and Guido Molinari, both formidable colourists. Today, working with colour remains a mainstay of his work. Montreal became and remained the home base of his art practice.

In the Natural History works of the 1990s, biology provided unexpected contexts to engage the imagination. This series brought together an eclectic array of animate and inanimate forms in a way that crossed over conventional boundaries of figuration and abstraction. The work's focus shifted from oil to acrylic painting, At the same time, his evolving understanding of the painting process was teaching him how an image needed to be reborn through the process of experimentation.

The years 2008 -2010, saw the production of an Oil Rig Paintings, a series of abstracted seascapes. Featuring offshore drilling platforms, they evoke both southern and northern places half lived, half conjured. Many of these images depict an offshore "blow-out", the fiery discharge that rises through layers of waves, smoke, fog and clouds.

In Johnson's paintings culture and nature hold together in a tenuous balance. Emotion tinged recollections of sites observed and imagined, are layered one over the other. In the more recent series "Scotia", Maritime colour fields feature palimpsest of colonial maps with references to figures from local popular culture. A mutable sense of place and the ironic vagaries of collective memory are reflected here. 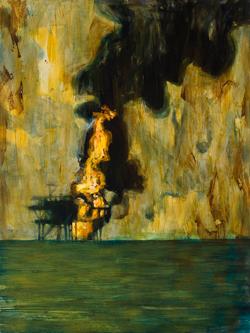