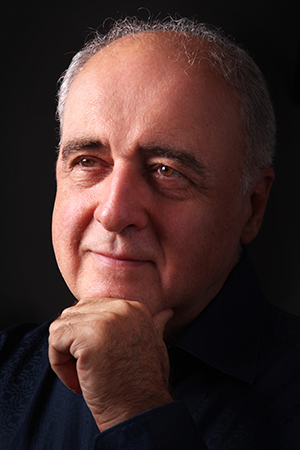 Gregory Chaverdian completed his Master of Music and PhD in Piano Performance in the Komitas State Conservatory in Yerevan, Armenia. In 1989, he was awarded First Prize at the International Music Competition in Rio de Janeiro.

Since then, Gregory has appeared on the concert stage as a soloist and a collaborative pianist and has performed in Russia, England, Ireland, France, Italy, Brazil, Hungary, Poland and Canada.

From 2000, he started to teach Piano Performance in the Concordia University.

In collaboration with I Musici de Montreal, he performed the canadian premiere of a Piano Concerto by Michelle Ekizian (New York, USA).

With English pianist David Owen Norris, he recorded a piano duo CD for Chandos, under the direction of Yuli Turovski.

With the soprano-coloratura professor of McGill University Aline Kutan, he recorded a CD of Armenian Melodies.

He recorded a recital with world renowned bass Barseg Tumanyan in Wigmore Hall in London. Gregory has been invited to play with him at the Wroclaw Music Festival in Poland and the Wexford Opera Festival in Ireland.

In 2018, he performed Yellow River Concerto with the Imperial Symphony Orchestra in Oscar Peterson Concert Hall.

Except being a Concordia Piano Performance professor, he has also given master classes in Lisbon Conservatory of Music and Schlern International Music Festival (along with Misha Maisky and Vladimir Kraynev).

Gregory is also a faculty member of the International Music Academy in Burgos, Spain and Castelnuovo di Garfagnana Toscana, Italy.

Many of his students continue their studies at prestigious schools like the Royal College of Music in London, the Manhattan School of Music in New York, North Western University in Chicago, IL, the University of Toronto and Moscow Conservatory.