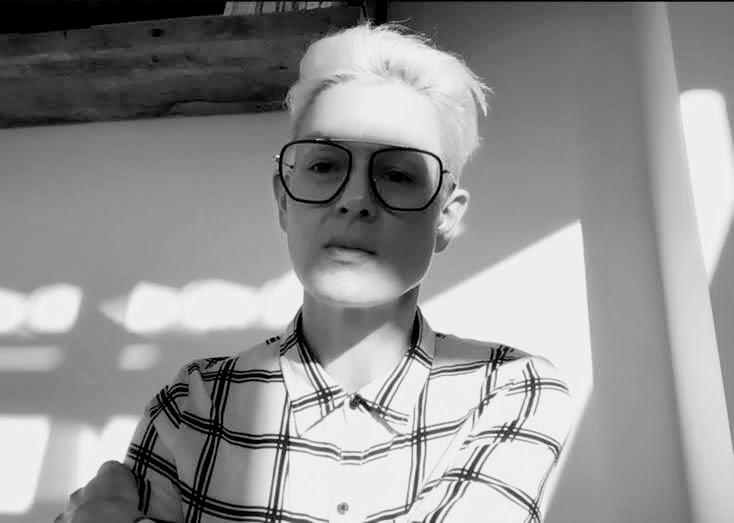 A black and white picture of a non-binary person wearing a checkered button-down shirt. They also wear large black-framed glasses, and have short platinum colored hair. A shadow crosses the middle of their face in an otherwise brilliantly sunlit room.

Lynes examines the role contemporary art, experimental media, and infrastructures play in mediating social life under conditions of political struggle or precarity. They have analyzed media interventions in times of war, occupation and crisis, as well as conditions of systematic disenfranchisement and vulnerability in and through bordering regimes. Their focus on the politics of visibility engages feminist and queer theories, feminist STS, critical race studies, postcolonial and transnational examinations of culture, and theories of embodied subjectivity.

Their current research project Greenhouse Effects: The Mediation of Life and the Migration of Labor, seeks to explore how greenhouses have been a central infrastructure for the racialized, classed, and gendered global movement of humans, plants, animals, knowledge and culture over the last several centuries and today. In understanding greenhouses as media, they turn their attention to Victorian wardian cases and Kew Gardens, Canadian temporary foreign worker programs, the research hub of Food Valley in the Netherlands, speculative capital investment in Kentucky, media partnerships in Japan, and the "sea of plastic" in Southern Spain. Another dimension to their research focuses on artistic and activist speculative work for imaging and imagining more just, decolonial, and sustainable futures. An early speculative work on this project can be found here.

They are currently working on an article, "Pollination and the Horrors of Yield," which reads the sexual and racialized dynamics of pollination in the South African horror film Glasshouse through feminist STS, decolonization, and queer critiques of reproductive normativity.

They are also working with other members of the Feminist Media Studio on a SSHRC funded project entitled "Necessary Feminisms". This project has two axes: Resisting Displacement (a collective interrogation into the political and aesthetic strategies for resisting displacement across migrant justice, Palestinian liberation, Indigenous decolonization and housing justice movements); and Real Sanctuary (a speculative imaginary project to create an archive of strategies and sources for flourishing and refuge).


COMS411: Sexuality & Public Discourse: How does sexuality become an object of public discourse? While we may assume that sexuality constitutes what is most private about ourselves and our intimate relations, this course examines the ties that bind sexuality to the public sphere, to culture, power, ideology, and fantasy. Through the disciplines of feminism and queer theory, this course examines how sexuality and public discourse are co-constituted—how public life frequently takes as its task the regulation of sexuality and, conversely, how sexuality eroticizes social relations, relations frequently marked by power and knowledge.

COMS415: Advanced Topics in the Photographic Image: This course asks the questions: How is the body captured by or placed in the photograph? Who takes the picture? Who is and is not seen? What is privileged within the field of vision? While we will start from the assumption that photography put into play a whole series of questions, crises, and practices of looking, of (stereo)typing, of representing and knowing, the course will not dwell too much in this repressive history. Guided instead by Ariella Azoulay’s powerful insights in The Social Contract of Photography, we will think about how to see, hear, and listen to photographs otherwise, as a practice with a powerful potential to make demands or build solidarity.

COMS463: Semiotics: Semiotics takes as its subject the problem of meaning: the formal processes by which something (a word, an image, a sound) comes to stand for something else (an idea, concept, object). What are the particular operations that construct meaning? How do they become naturalized: the words we use without thinking about them, the advertising images that are grasped in the flash of an eye, the news reportage that worlds the world for us, or the iconic figures that galvanize public aspirations? Students will be invited to become mythologists: reading culture with a differential eye, dissecting and analyzing the images that surround us, the stories we tell, the organization of culture. The work of semiotic analysis will open a toolbox for moving beneath the surface of things, to understand signs in relation to others, their force and circulation, and their poetics.

COMS600: Communication Theory: This course is meant to critically examine a broad range of theories of communication that attempt to define media and their social role. But we are examining these theories together in an unprecedented moment: not only the COVID-19 pandemic that has forced us to readjust how we meet, teach and learn together, the revolution in the streets for Black Lives Matter, the end of reconciliation and the demands for reparations by Indigenous communities, the precipitous challenges of radical climate change, and political instability and new totalitarianisms around the world. What does it mean, then, to do media studies in our times? These are necessary and formidable challenges. We will be attempting to address head on shifts in how the classroom is constituted, how we create communities online, how we think in inclusive ways, how we centre marginalized voices, and how we do engaged scholarship. And we jump into this exercise without guarantees, with the potential for confusion, technical glitches, second waves, and more. But we do it conscious also of the urgency of doing this work, and doing it together, in this time.
COMS635: Media & Feminist Theory: The course begins with a series of questions posed by Angela Davis at Occupy Wall Street: “How can we be together? How can we be together in a unity that respects and celebrates the differences among us? How can we be together in a unity that is not simplistic, that is not oppressive, but rather complex and emancipatory?”. We will look for answers to these passionate and urgent questions within the theoretical, creative, and political engagements of variously articulated feminisms, taking as our rubrics Subjectivity, Collectivity, Mediation and Strategy. We will examine feminist literatures on sex, gender and sexuality, focusing on specific debates around the constitution of the subject of and how the legacy of feminist scholarship has influenced and been influenced by feminist media (broadly constituted). Throughout, we will pay attention to the intersection of sex/gender with race, class, sexuality and ethnicity and reflect on how these notions are culturally bound and historically specific.
COMS642F: Feminist Globalizations: How are definitions of gender, sex and sexuality negotiated and reproduced in the context of globalization and transnational flows of people, goods and media? What are the implications of neoliberalism for bodies, identities, relations and movements? How does gender complicate our understandings of globalizing processes? This course will examine the intersections of feminist and queer theories with global cultural studies, particularly with respect to questions such as global flows, migration, militarization, border struggles and the construction of social movements across locations. We will also trace critiques of the implication of feminism with neoliberalizing processes (particularly in the reproduction of, for instance, colonial and heteronormative assumptions). Throughout, we will focus on the implication of processes of signification with transnational flows, and seek to theorize the possibilities and limitations of feminist media in a globalized present.

COMS835: Doctoral Pro-Seminar: The key objective of the Pro-Seminar is to provide students with a collective context and set of guiding frameworks through which to develop, present and ultimately defend their thesis proposals. Through workshopping and brainstorming, exchanges and feedback with other members of the seminar (who are not necessarily specialists in students' specific area of research and research-creation), students will learn to articulate and structure the central ideas for your theoretical framework, coterie of literatures and methodology that will ground their doctoral thesis work. The seminar prioritizes interdisciplinary approaches to research and research-creation.
COMS873: Identities and Cultural Exchange: What is the subject, the self, and its relation to politics? How is identity politically, socially, and culturally positioned in relation to otherness, in and through the circuits of cultural exchange that bring communities into encounters that are both powerful and threatening? These questions are poignant in the contemporary geopolitical context, under the conditions of continued domination and exploitation, the emergence of new right-wing populisms, newly inflamed culture wars, and state and non-state sponsored forms of violence, as well as in the search for new forms of belonging, survival and thriving in the 21st century. This doctoral seminar is organized as a ‘toolbox’ course, examining how the politics of recognition open us both to the social relations that found human subjectivity, as well as to how asymmetrical forms of recognition may lead to misrecognition or injury.

COMS888: Discourses of the Body: This course tracks discourses on the body through the lens of theories of sexuality and the drive in order to understand the complex processes of embodiment in society and the contemporary global system. The course follows the dynamic models of embodiment and subjectivity in the domain of psychic processes, technologies, globalization, colonialism and postcolonialism, and the differentiating discourses of race, gender, sexuality in bodily economies. From this theoretical terrain, we will examine how the drive is enacted in certain psychic and bodily processes, including mourning and melancholia, gender identity, family inscriptions and reproduction, and starvation. We will end with an examination of the impact of theories of sexuality and the drive in the domains of globalization, postcolonial theory, nationalism and cultural belonging. Throughout we will pay attention to the valuation of bodies, specific processes of bodily inscription, and the open question of bodily limits.

Greenhouse Effects: The Mediation of Life and the Migration of Labor. [in process]

"SOPHIA: The language of 'trafficking' and the mediation of gendered migration" in Moving Images: Mediating Migration as Crisis. Bielefeld: Transcript Verlag, 2020.

"Introduction: In and Against Crisis" (with Tyler Morgenstern and Ian Alan Paul). in Moving Images: Mediating Migration as Crisis. Bielefeld: Transcript Verlag, 2020.

"Either You Get it or You Don't: A Conversation with LGBTQI Refugees in Greece's #Rockumenta Action" (with Sophia Zachariadi) in Moving Images: Mediating Migration as Crisis. Bielefeld: Transcript Verlag, 2020.

"Greenhouse Effects: Captive Labour, or How Like a  (Salad) Leaf." Heliotrope, 2021.

"Drowned at Sea: What haunts the stories of trafficked women?" Feminist Media Studies. Critique & Commentary: Gender, Migration and the Media. Vol.18, No.6, 2018.

"Between a Rock and a Hard Place: Performative Politics and Queer Migrant Activisms". ADA: A Journal of Gender, New Media and Technology. Issue 14: Visualizing Protest, 2018.

“A Discrepant Conjuncture: Feminist Theorizing Across Media Cultures”. Ada: A Journal of Gender, New Media, and Technology, No.1, 2012.

“Poetic Resistance and the Classroom Without Guarantees”. Theory & Event. Vol.15, No.3. Supplement. Autumn 2012.

"Perversions of Modesty: Lars von Trier's The Five Obstructions and 'the most miserable place on earth." Third Text. Vol.24, No.5, 2010.

Graduate supervision (past and present)