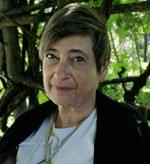 Sandra Paikowsky retired from the Department of Art History in 2010 after coming to the department in 1969. She is the First Distinguished Fellow of the Gail and Stephen A. Jarislowsky Institute for Studies in Canadian Art. She co-founded the Journal of Canadian Art History/Annales d'histoire de l'art canadien in 1974 and was its Managing Editor until 2010, although she remains the Journal's publisher and a member of its editorial board. She is currently editing two special issues of the Journal with articles in honour of Dr. François-Marc Gagnon.  From 1981 to 1992 she was the Director/Curator of the Concordia Art (now the Ellen Art Gallery). Since then, she has guest-curated several exhibitions, including the

Goodridge Roberts 1904-1974 traveling retrospective (1998) and was a co-curator ofAchieving the Modern. Canadian Abstract Painting and Design in the 1950s (1992). In 2010 she curated the exhibition John Fox: Refiguration in Montreal and most recently John Fox: Opera su carta in Venice, Italy. Sandra Paikowsky is also a co-editor of the recent publication, The Visual Arts in Canada and the series co-editor with Dr. Martha Langford of the McGill-Queen's Beaverbrook Canadian Foundation Studies in Art History. She has also lectured and presented papers on issues in Canadian and Montreal art across Canada, in the United States and in Venice.   In her many years with the Department of Art History, she taught undergraduate courses in Canadian art history, Montreal art associations, the Renaissance in Venice, foreign artists in Venice in the early 20th Century as wells as critical writings on Abstraction Expressionism and the de Koonings, among many other topics. Her graduate teaching focused on museum exhibitions, art societies and university art galleries.