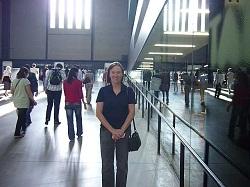 Margaret Hodges received her doctorate in 2004 from McGill University. Her thesis involved the work of Van Ginkel Associates, including their 1960's studies of the Port of Montreal, the transportation circulation and urban design of the central area, and the plan for the rehabilitation of the Old City of Montreal. Margaret's research and teaching involves the topics of 20th century architecture and urbanism, feminist theory, aesthetics and ethics. She has contributed to the Dictionnaire des Créatrices on the work of Blanche Lemco van Ginkel (b. 1921) Jean Wallbridge (b. 1912) and Mary Imrie (b. 1918) Her research interests include the topic of educational buildings and the pedagogical theories that have influenced design over the decades. She is currently working on the school designs of Janet MacTavish (b. 1925) of the firm Barott, Marshall, Merrett and Barott, Montreal. Another research interest is the Modern Church and she has recently conducted research and read papers on the Canadian churches of Philip Carter Johnson. Margaret is working on a manuscript of the early planning initiatives of van Ginkel Associates, and the current state of infrastructure in Montreal. She has read a number of papers on the Modernist aesthetic of the raised expressway. Part of a book chapter, "Expressway Aesthetics: Montreal in the 1960's", will be published in the Journal of the Society for the Study of Architecture. Another major research interest is aesthetics and Margaret's writing involves the aesthetics of the urban environment, the aesthetics of the natural environment and Kantian theory as applied to architecture. In this vein she has read papers and published on the work of Patkau Architects, Shim-Sutcliffe Architects and Brian MacKay Lyons. Margaret has read papers on aesthetics at the Aristotelian Society and Mind Association Conferences, Great Britain, the European Conference of Analytic Philosophy, Italy, the McGill University aesthetics group, "Montreal Reflections on Art and Aesthetics Workshop", and the Canadian Society for Aesthetics Meetings of the Congress of the Humanities and Social Sciences. She has also given papers on architecture at the Society for the Study of Architecture in Canada Conferences. Margaret has been a SSHRC holder and has received travel and research grants from CUPFA. She has also held a research grant funded by the McGill Centre for Research and Teaching on Women.