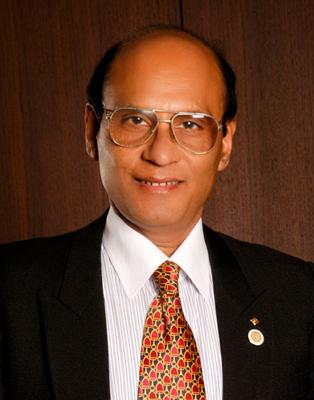 Dr. M. Omair. Ahmad received the B.Eng. degree from Sir George Williams University, Montreal, QC, Canada, and the Ph.D. degree from Concordia University, Montreal, QC, Canada, both in electrical engineering. From 1978 to 1979, he was a member of the Faculty of the New York University College, Buffalo. In September 1979, he joined the Faculty of Concordia University, where he was an Assistant Professor of Computer Science. Subsequently, he joined the Department of Electrical and Computer Engineering of the same university, where he was the Chair of the department from June 2002 to May 2005 and is presently a Professor. He holds the Tier I Concordia University Research Chair in Multimedia Signal Processing. He has published extensively in the area of signal processing and holds four patents. His current research interests include the areas of speech, image and video processing, communication DSP, adaptive signal processing, biomedical signal processing, biomedical imaging, computer vision, protein sequence alignment, biometrics, fast discrete-domain transforms, watermarking, object detection and tracking, and VLSI circuits for signal processing. He was a founding researcher in Micronet from its inception in 1990 as a Canadian Network of Centers of Excellence until its expiration in 2004. Previously, he was an Examiner of the Order of Engineers of Quebec. Dr. Ahmad was an Associate Editor of the IEEE TRANSACTIONS ON CIRCUITS AND SYSTEMS PART I: FUNDAMENTAL THEORY AND APPLICATIONS from June 1999 to December 2001. He was the Local Arrangements Chairman of the 1984 IEEE International Symposium on Circuits and Systems. During 1988, he was a member of the Admission and Advancement Committee of the IEEE. He has also served as the Program Co-Chair for the 1995 IEEE International Conference on Neural Networks and Signal Processing, the 2003 IEEE International Conference on Neural Networks and Signal Processing, and the 2004 IEEE International Midwest Symposium on Circuits and Systems. Presently, he is the Chairman of the IEEE Circuits and Systems Chapter (Montreal Section). He serves on the Signal Processing and Education technical committees of the Circuits and Systems Society of IEEE. He is a recipient of numerous honors and awards, including the Wighton Fellowship from the Sandford Fleming Foundation, an induction to Provosts Circle of Distinction for Career Achievements, and the Award of Excellence in Doctoral Supervision from the Faculty of Engineering and Computer Science of Concordia University. Dr. Ahmad is a Fellow of the Institute of Electrical and Electronics Engineers.
Back to top