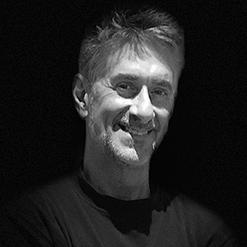 Michael Montanaro is a trans-disciplinary artist who is best known for his work in the field of contemporary dance and mixed media. A graduate of the Hartford Conservatory, he has performed with the Boston Ballet, Les Grands Ballet Canadiens and Le Groupe de la Place Royale where he also served for 5 years as co-artistic director. In 1985 he founded Montanaro Dance, developing a reputation for using cutting edge technology to create theatrical environments for his choreography. Over its ten-year history Montanaro Dance toured both nationally and internationally.

Since 1996 Michael has worked as a choreographer, director and collaborator on numerous projects including the Cirque du Soleil’s “Varekai”, Opéra de Montréal`s multi-media version of “Carmina Burana”, the documentary “Montanaro InTime”, a full length theatrical work “Frankenstein’s Ghosts, and a series of short films entitled “Dances for Small Spaces”. He has also been deeply involved in the envisioning, design and creation of numerous research projects dedicated to evolving innovative ways in which new technologies are used to enhance the performative experience within responsive environments. From 1999 through 2014 Michael held the position of Chairof the Department of Contemporary Dance, Concordia University.

a Full Professor, Michael is also the Co-Directorof the Topological Media Lab, a founding member of Hexagram / Institute for Research/Creation in Media Arts and a member of Milieux – Institute for Arts, Culture and Technology. As co-director of the Topological Media Lab, he is involved in working with many undergraduate and graduate students in the conception, development, creative direction and realization of many of the labs diverse research streams. Michael is currently the Principle Investigator and director of “InTime”- an FQRSC funded research creation project focused on building a large scale interactive installation dealing with the perception of time; the stage direction and a conceptual collaborator on “Practices of Everyday Life – Cooking” an electroacoustic composition / performance piece based on the sonified preparation of a meal by a professional chef/dancer,  and a co-applicant/recipient on Michael Jemtrud’s FARMM LAB’s SSHRC Insight Grant ; Arts and Ideas in Motion.  In 2011 Michael was invited by the Centre for Music Studies at Cambridge Universityas guest lecturer and also spent two separate periods of time at the University of Chicago as a visiting artist. He is currently involved in the design of interactive media for the Solar Decathlon, Deep Performance Dwelling zero state home completion, China 2018