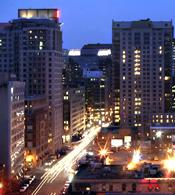 Dr. Maben Walter Poirier's research is focussed in the area of political philosophy.  His research and publications cover four area of concern: the epistemological foundations of scientific thinking as these bear on the study of the social sciences in general and political science in particular; the thought and writings of the Hungarian-British physical chemist and philosopher of science Michael Polanyi (1891-1976) and their implications for the science of politics; and the writings of the Twentieth Century political thinker Eric Voegelin (1901-1985).  Dr. Poirier also studies and has published on the ubiquitousness of ideological thinking not only in the field of politics, but also in political studies and almost all areas scholarship.  In addition, lately Dr. Poirier has been concerned with issues related to the growth of governance since the mid Eighteenth Century, with special emphasis on the related problem area that is the replacement of education by training.