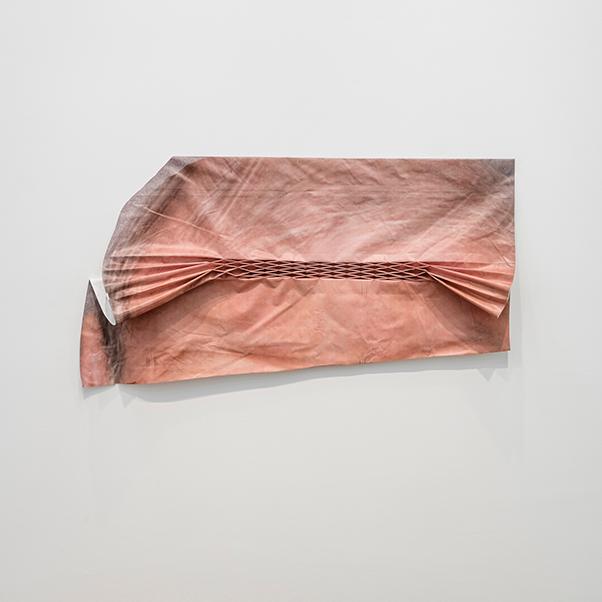 Kelly Jazvac (b. Hamilton, ON) works with plastic waste to probe the permanence of disposability. She often re-works found images from advertisements printed on plastic into new site-specific installations. She is also part of a SSHRC-funded plastic pollution research team called The Synthetic Collective, which includes scientists, artists and writers. She has upcoming exhibitions at MoMA (New York); Fierman Gallery (New York); The Musée D’Art Contemporain (Montréal), and Art Museum at the University of Toronto. Her recent exhibitions include the Eli and Edyth Broad Museum (East Lansing); Ujazdowski Castle CCA (Warsaw); and Fierman Gallery (New York). Her work has been written about in National Geographic, e-flux Journal, Hyperallergic, Art Forum, The New Yorker, Border Crossings, Canadian Art, C Magazine and The Brooklyn Rail. Her collaborative art/science research has been published in scientific journals including Nature Reviews, GSA Today, and Science of the Total Environment.  She is based in Montreal, where she is an Associate Professor of Sculpture in the Department of Studio Arts.

Past Courses Taught at other universities:

StudioArt, VAS 9521/9561A, Graduate StudioElective: Work Ethic: Looking like you’re not trying and looking like you meanit, University of Western Ontario, graduate level 2010

2016 BROWSING,  installation at the former David Mirvish Gallery and Books on Art, curated

by Eleanor Johnston as an independent project affiliated with Nuit Blanche, Toronto,

2021 (forthcoming) Plastic Heart: Surface All the Way Through, Art Museum at the University of Toronto, organized by the Synthetic Collective, Toronto, ON

2018 Learning From The Lake, Art Museum at the University of Toronto, curated by Katie Lawsen,

2017 Opening exhibition at The Museum of Capitalism,  Oakland, CA

2017 Song of the Open Road,  Contemporary Art Gallery, Vancouver, BC

2017 An absolute movement,  Or Gallery, Vancouver, BC

2016 All This Time,  Hugh Jackman Institute of Humanites, Art Museum at the University of

2016 The Future We Remember,  The Southeast Center for Contemporary Art, curated by

2015 An other land…and in the other, our own,  Prosjekstrom Normanns, curated by Ian Cofre,

MUCH AS YOU WOULD LIKE,  Garden Avenue Projects, curated by Ella Dawn

curated by Corinna Ghaznavi, Ottawa, ON and Saskatoon, SK

2014 Possible Futures: What is to be done?  Curated by Srimoyee Mitra, Melissa Bennett, Lucy

2013 Hybrid Painting,  curated by Christiane Meyer-Stoll, as part of curated by_ vienna 2013 ,

with Abbas Akhavan and Ron Tran), Toronto, ON

2010 Things You Should Know…,  ArtLab, University of Western Ontario, London, ON

2009 The Way I Are , curated by Katie Bethune-Leamen, Blackwood Gallery, University of