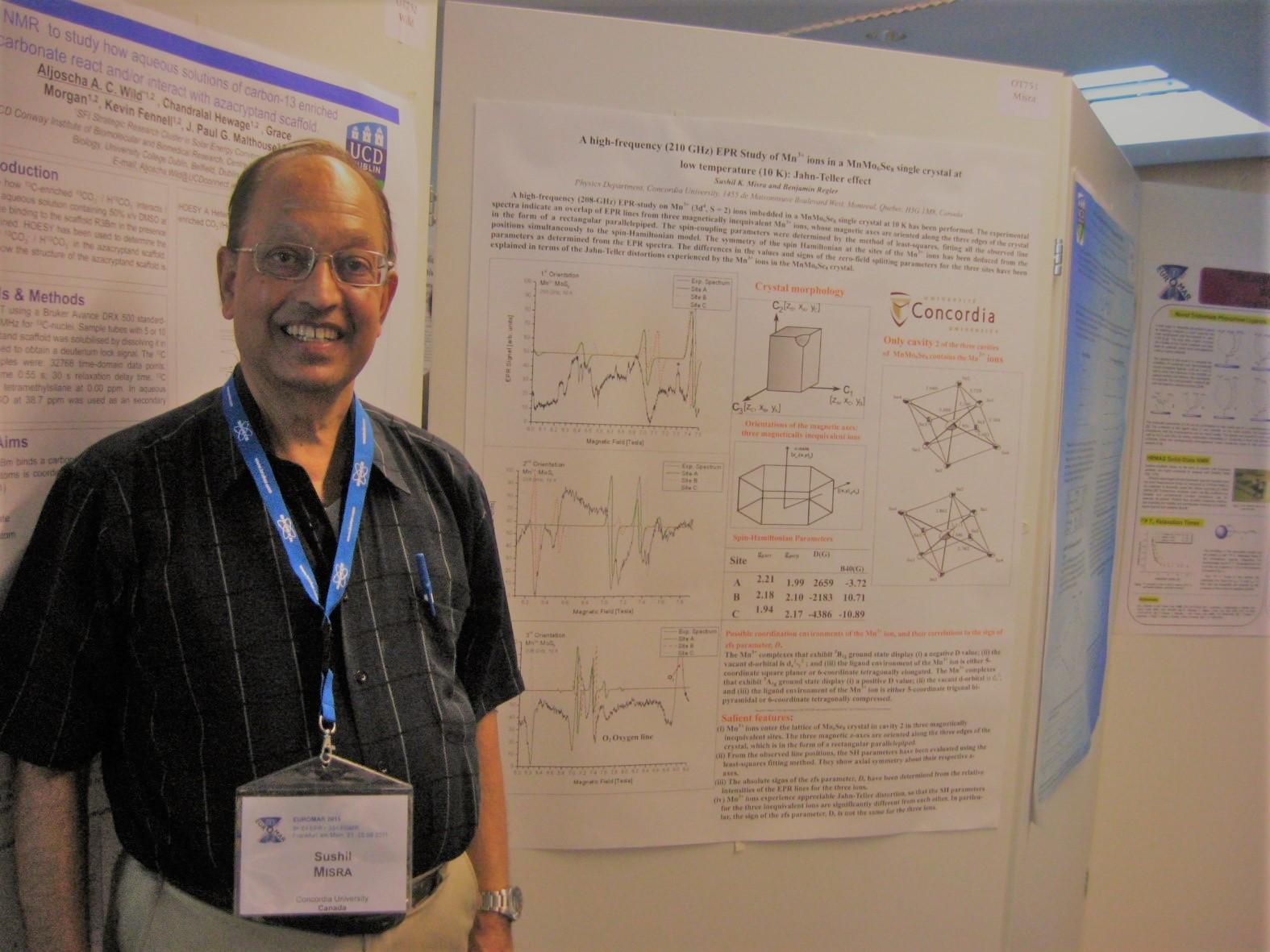 He is carrying out experimental EPR research in functional materials in nano-state, e.g. dilute magnetic semiconductors, high-Tc superconductors, materials with applications to spintronics. He is also involved in theoretical pulsed electron spin-lattice relaxation studies using Stochastic Liouville and Liouville von-Neumann Equations, with the latest research being on   exploitation of pulse EPR technique to study electron spin-lattice (T1), electron- electron (T2), and nuclear spin relaxation (T2n) times in solids and liquids. Ten Ph. D. and the same number of Master’s students have received their degrees under his supervision. As well, some eleven post-doctoral students have collaborated on research under his supervision.

He collaborates actively with researchers at ACERT (Advanced Center for Electron Spin Resonance Technology) at Cornell University, Ithaca, NY, USA, whose director is the leading expert in EPR Professor Jack Freed, as a collaborating faculty member from Canada. Apart from single-crystal and polycrystalline Continuous Wave EPR research using the 170 and 240 GHz at ACERT, he does simulations for rigorous computations of signals obtained (i) by DQC (double quantum coherence) pulsed EPR to measure distances in membranes, and (ii) by 2D-ELDOR (two dimensional electron double resonance) pulsed EPR to measure distances in biological samples at  ambient  temperatures.

He has served as an external examiner to numerous international Ph. D. theses  outside of Concordia University, submitted in Canada, France, India, and Australia. He serves as a referee to important journals in Physics and Chemistry, publishing EPR research, e.g. the Physical Review and Physical Review Letters, Journal of Physics and Chemistry of Solids, Journal of Chemical Physics, Journal of Physical Chemistry, Journal of Magnetism and Magnetic Materials, Journal of Magnetic Resonance, Journal of Applied Magnetic Resonance. He has published several review articles in EPR, as well as he has written book chapters in leading research monographs. In addition, he has edited, and written chapters, in two books on Multifrquency EPR (Theory and Application & Data and Techniques). His research has been continuously supported by NSERC (Natural Sciences and Engineering Research Council of Canada) over 50 years. Of ther 290 papers published by him in peer-reviewed journals, over 250 are in the field of  EPR.

Dr. Heather Igloliorte (Inuk, Nunatsiavut) holds the Tier 1 University Research Chair in Circumpolar Indigenous Arts and is an associate professor in the Department of Art History. She also serves as the Special Advisor to the Provost on Advancing Indigenous Knowledges, and in this role contributes to the efforts of the university Indigenous Directions Leadership Group. Her teaching and research interests center on Inuit and other Native North American visual and material culture, circumpolar art studies, performance and media art, the global exhibition of Indigenous arts and culture, and issues of colonization, sovereignty, resistance and resurgence.

Heather is the Principal Investigator of the 2.5M, 7-year SSHRC Partnership Grant, Inuit Futures in Arts Leadership: The Pilimmaksarniq/ Pijariuqsarniq Project (2018-2025), ​which aims to empower circumpolar Indigenous peoples to become leaders in the arts through training and mentorship. With Professor Jason Edward Lewis, Heather also Co-Directs the Indigenous Futures Cluster (IIF) in the Milieux Institute for Arts, Culture and Technology. Through Milieux, Igloliorte works with collaborators and students to explore how Indigenous people are imagining the future of their families and communities. Heather has been a curator for fourteen years, ​and currently has three exhibitions touring nationally and internationally; she is also the lead guest curator of the inaugural exhibition of the new Inuit Art Centre, INUA, opening at the Winnipeg Art Gallery in 2020. Heather publishes frequently; she has co-edited special issues of journals PUBLIC 54: Indigenous Art: New Media and the Digital (2016) and RACAR: Continuities Between Eras: Indigenous arts (2017), and her essay “Curating Inuit Qaujimajatuqangit: Inuit Knowledge in the Qallunaat Art Museum,” ​was awarded the 2017 Distinguished Article of the Year from Art Journal.

Igloliorte currently serves as the Co-Chair of the Indigenous Circle for the Winnipeg Art Gallery, working on the development of the new national Inuit Art Centre; is the President of the Board of Directors of the Inuit Art Foundation; and serves on the Board of Directors for North America's largest Indigenous art historical association, the Native North American Art Studies Association, the Faculty Council of the Otsego Institute for Native American Art History at the Fenimore Art Museum in Cooperstown, New York, and the Nunavut Film Development Corporation, among others. Heather has previsously  served as an Executive Member of the Board of Directors for the Aboriginal Curatorial Collective (2005 - 2011) and as the President of artist-run-centre Gallery 101 (Ottawa, 2009 - 2011) in addition to other advisories, juries and councils.

Dr. Paul Gomme joined the Department of Economics in 2006 as a Professor. He has worked at Universite de Montreal, Simon Fraser University, the University of Iowa, and more recently as an economist and senior economic adviser at the Federal Reserve Bank of Cleveland.