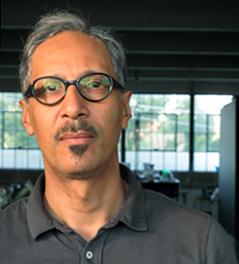 Jean-Claude Bustros has created several short film pieces that have established him as one of the key figures in contemporary experimental cinema in Canada. His work has been screened internationally and was showcased in the landmark exhibition "Les Cinémas du Canada" at Centre Georges Pompidou in Paris. He was one of the founders of Dazibao photo gallery in Montréal and the creator of the massive Pierre et Lumière photography exhibition, hosted by the Palais de la Civilisation in Montréal as part of the 350th anniversary celebrations of the city. He has received support from every level of funding and participated in numerous peer reviews. His practice has now migrated towards new and expanded forms of cinema, where he explores the potential of spatialization, ubiquitous computing, reactivity and moving image agency. Jean-Claude Bustros is a member researcher at Hexagram.