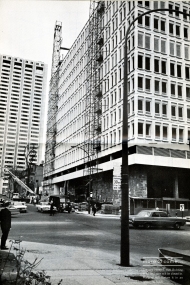 In two weeks, the Henry F. Hall Building will turn 50. Inaugurated on October 14, 1966, like the Montreal Metro, it is named after Henry F. Hall, who is an important figure of Sir George Williams University.

The construction of the Henry F. Hall Building on Burnside Street (now de Maisonneuve) officially started on March 27, 1964. The Official Ground Breaking Ceremony was held on April 17, 1964. The Hon. Paul Gérin-Lajoie, Minister of Education at the time, layed the cornerstone on May 8, 1965.

To celebrate the occasion, Records Management and Archives is happy to present a new web page featuring images of the building through the years, several of which have never been published online before.

Want to know more about the Hall Building? Please visit our Buildings page. If you would like to do research on Concordia Buildings or any other subject, please contact Caroline Sigouin at 514-848-2424 ext. 7970.