‘This work is far more than a landscaping facelift’ 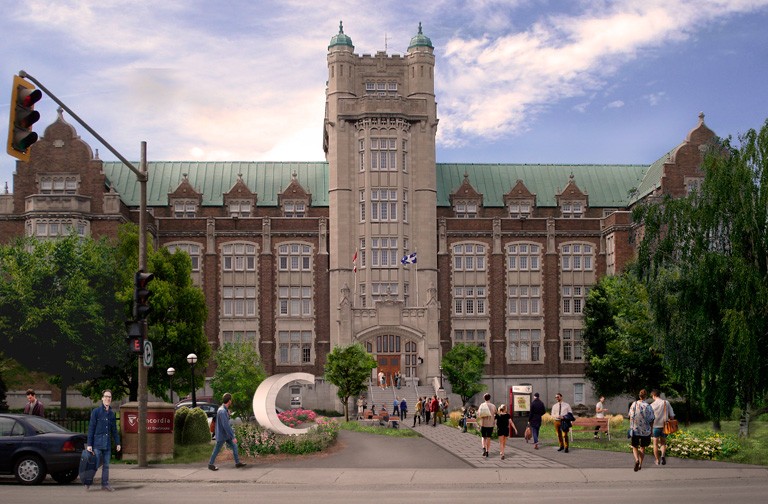 Loyola Campus is going to look a lot greener soon. Landscaping work to the main entrance of the Administration Building (AD) will provide Concordia’s Faculty of Arts and Science with a setting worthy of its stature. The redesign is also the product of discussions with the City of Montreal that requested it.

Work crews will be rolling in to remove a significant section of the asphalt that currently welcomes people to the iconic structure.

Once completed, the entrance will include 11 new trees, a proper pedestrian walkway and surfaces that better absorb water and allow for more plant life.

“This work is far more than a landscaping facelift,” says Roger Côté, vice-president of Services. “It is a demonstration of our commitment to increasing the biodiversity of the campus, the prioritizing of pedestrians over cars and the impact of design on our social environment.”

Plans to redevelop the front of the AD Building have long been in the making. Because of the visibility of the space, as well as its use by the broader community, the borough of Côte-des-Neiges–Notre-Dame-De-Grâce took an active interest in the design.

“Normally, this kind of landscaping project wouldn’t need to be submitted to the city for an approval by the Comité consultatif d’urbanisme,” says Marie-Claude Lavoie, associate vice-president of Facilities Management.

“However, because the Loyola site is classified as a Lieu à grand intérêt patrimonial, it was deemed important that the committee give their input.”

Three iterations of the basic design followed. The project manager also shared the approved design with internal stakeholders. That led to recommendations on how to accommodate STM buses while still reducing the asphalted area, how to ensure wheelchair access and which indigenous trees to favour among the new ones being planted.

Changes for the better

Those accessing the campus through the AD Building will do so on a paving stone path, rather than paint on asphalt. That will mean a clearer distinction between cars and pedestrian pathways.

The walkway will include more shade, benches and ground-level planters, which will also capture water.

The university considered the idea of completely restricting cars, but the option was rejected in order to address the needs of Concordia’s diverse community, which included members with accessibility needs.

To allow for work on the land to proceed safely, there will be a detour for pedestrians and cars for a few weeks. Those accessing buildings north of Sherbrooke St. W. will be able to do so via the path east of the AD Building, toward the shuttle bus stop. They will also see detours to the west, along the side of the Communication Studies and Journalism (CJ) Building.

STM adapted transport vehicles will bring people to the campus through Refectory Rd., via West Broadway St. Those in private vehicles could still disembark on Sherbrooke, then follow one of the designated paths.

If all goes according to plan, by early November, Concordia will finally have an entranceway to match the beautiful AD building — one with sustainable design top of mind.

If you have questions about the redesign or work on the landscape in front of Concordia’s AD Building, please contact Facilities Management.