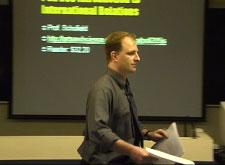 Dr. Julian Spencer-Churchill (Schofield)’s research focuses on security and strategic studies, which means the study of state and non-state power, as well as the causes of war and peace. He has published on topics covering every continent except Europe. His principal research focus is on arms racing and its impact on war causation, the sharing of nuclear weapons, naval strategy, and military doctrine and planning. His field research has included work at the US Pentagon and State Department, Egypt, Indonesia, Bangladesh, India, and most frequently, Pakistan. His teaching focuses on strategic analysis, the procurement and deployment of nuclear weapons, the strategic studies of China, and causes of war and peace. He employs quantitative methodology, including operations research, statistics and games theory in all of his courses. He was an army engineer officer between 1988 and 2003.