Jane G. V. McGaughey joined Irish Studies at Concordia in 2012 as the Assistant Professor of Irish Diaspora Studies.  She completed her PhD at Birkbeck College, University of London in 2008.  Her thesis examined the relationship between public masculinities and warfare in Ulster before, during, and after the First World War.  Her first book, Ulster's Men: Protestant Unionist Masculinities and Militarization in the North of Ireland, 1912-1923 was published by McGill-Queen's University Press in 2012.

Other publications include articles on Canadian citizenship, Irish Covenanters and Ian Paisley, Ulster masculinities during the Home Rule Crisis and along the Western Front, Irish veterans' bodies as sites of cultural construction, and transatlantic influences on Canadian masculinities since 1756.  She has written reviews for the Journal of British Studies, Labor History, The Canadian Historical Review, Recherches sociologiques, and Cercles - Revue pluridisciplinaire du monde anglophone.

Prior to her arrival at Concordia, Jane taught at the Royal Military College of Canada and was the 2009-10 National Endowment for the Humanities Faculty Fellow at the Keough-Naughton Institute of Irish Studies at the University of Notre Dame. 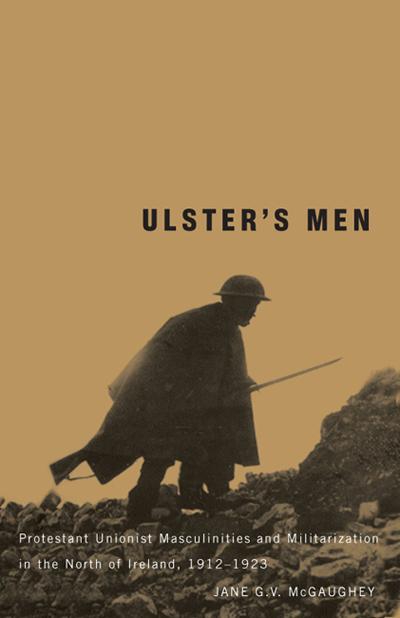 She is interested in supervising graduate students engaged in research in the cultural and social history of the Irish in Canada, America, Britain, Australia, New Zealand, Newfoundland, and other areas of the Irish Diaspora.  Students with an interest in the history of gender (masculinity as well as femininity), warfare, sexuality, violence, remembrance, the body, imperialism, citizenship, religion, and the Orange Order are welcomed

Dr. McGaughey’s research interests include the Irish Diaspora in Canada, Newfoundland, America, and Britain, the Orange Order's construction of public masculinities, and various portrayals of Ireland and the Irish abroad in popular culture.

Her current research focuses on representations of Irish masculinities and violence in Lower and Upper Canada between 1798 and 1849.  This project has been funded by a Fonds de Recherche Société et Culture grant from the Quebec government.

She also is interested in post-Celtic Tiger migration to Canada and its historical parallels, representations of Irish gender and sexuality in North American history and popular culture, and the contemporary cultural geography of "Irishness" in Canada.

Ulster’s Men: Protestant Unionist Masculinities and Militarization in the North of

Holy Heritage: Covenanters in the Atlantic World, special edition of the Journal of

“The Covenanter Sensibility Across the Long Atlantic World”: 125-134.

“The Language of Sacrifice: Masculinities in Northern Ireland and the Consequences of

“Blood-debts and Battlefields: Ulster Imperialism and Masculine Authority on the

“Men of Suvla: Empire, Masculinities and Gallipoli’s Legacy in Ireland and

“Standing on Guard?  History, Identity, and the Quandaries of Citizenship Education in

“Fighting in the Shadow: British and American Cultural Influences on Canadian Military

“Arming the Men: Ulster Unionist Masculinities and the Third Home Rule Crisis” in