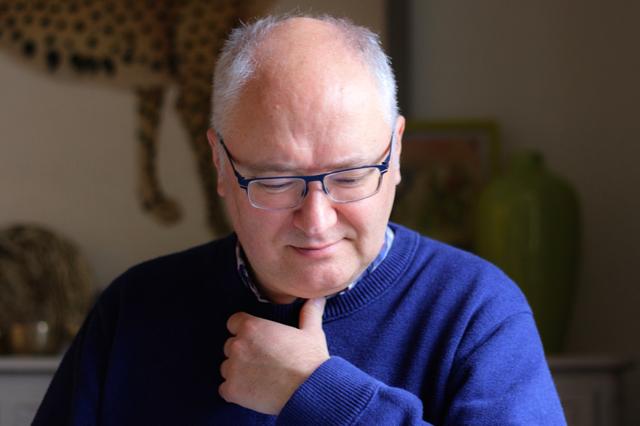 I took my B.A. Hons. in History and French at the University of Alberta in 1981.  My interests in history were initially primarily British and German; I wrote my honours thesis on “The German-Russian Trade Treaty of 1894”, using a wide selection of published German diplomatic documents, and sat three comprehensive examination papers in modern British history (1485-1960) in my final year.

The following year I took my M.A. at the University of Toronto, writing a research essay entitled “Romain Rolland, Interwar Pacifism, and the Problem of Peace.”  A few years later, this became my first major publication, albeit greatly reduced in size to a chapter in a book published in the United States.

The year at Toronto was pivotal in other ways for my future development as an historian.  Not only did my interests in history and French literature come together, but my approach to history changed completely.  Whereas until this point my interests had lain in fairly traditional diplomatic history, now they were focused on the history of the margins, and specifically on the nature of pacifism in interwar France.  I was intrigued by the complete dearth of studies on French pacifism.  Perhaps the French really were different.  My M.A. seemed to indicate that they were not.

This preliminary impression was more than confirmed the following year when I began my Ph.D. at the University of Edinburgh as a Commonwealth Scholar in Modern European History under the supervision of Professor Maurice Larkin.  An initial four-month research trip to Paris in my first year at Edinburgh demonstrated the existence of a huge variety of sources on French pacifism which had never been used by historians.  I had stumbled, almost by accident, on the perfect Ph.D. topic, one that was quite literally virgin territory.  I returned to Paris for two full years of research, and then began the writing up process.  Within four months of my Ph.D. viva in February 1988, my Ph.D. thesis had been accepted for publication by the Clarendon Press, the academic imprint of Oxford University Press.

I came back to Canada to take up a Killam Post-Doctoral Fellowship and subsequently a Canada Research Fellowship at the University of Alberta from 1988 until 1992, at which point I was appointed to the History Department at Concordia. I served as Graduate Programme Director in the department from 1999-2002, and was an Adjunct Professor of History at McGill from 2000-2010.  From 2000-2003 I was a member of the editorial board of French Historical Studies. In 2010 I was elected a Fellow of the Royal Historical Society in the United Kingdom.  I have been a Visiting Fellow at Magdalen College, Oxford, at the Institute for Advanced Studies in the Humanities at the University of Edinburgh, and at the University of St Andrews.

Elected a Fellow of the Royal Historical Society in the United Kingdom.

My most recent book has just been published by Oxford University Press in the United Kingdom.  It is entitled The War Guilt Problem and the Ligue des droits de l'homme, 1914-1944, and is based on research in both French and German archives.

My first book, The Politics of Dissent: Pacifism in France, 1919-1939, was also published by Oxford University Press (Clarendon Press, 1991 and 2011).  It was widely reviewed in newspapers and academic journals on both sides of the Atlantic, ranging from Die Zeit to the Times Literary Supplement. 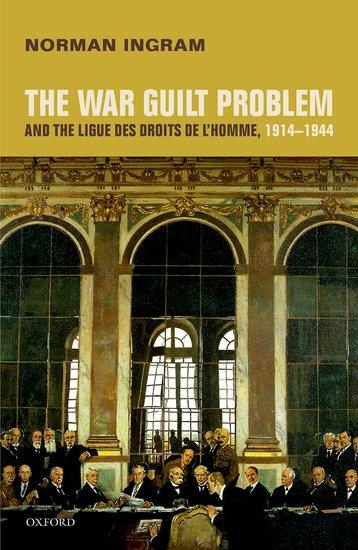 In the 2020-2021 academic year, I have a non-teaching term from September to December followed by a sabbatical leave from January to June.

I am interested in supervising MA and PhD candidates on topics dealing primarily with 20th century French history, although comparative topics involving Germany and Great Britain are also welcome.  PhD candidates especially should come with the necessary linguistic skills necessary for research in English, French or German.  Three quarters of the PhD theses I have supervised have been written in French.

Robert Parker, PhD Concordia in progress.  Winner of the Geoffrey Adams Scholarship in French History. Working on “Maurice Gamelin and the Fall of France, 1940”

Audrey Mallet, PhD Concordia and the Université de Paris I Panthéon Sorbonne (2016).  Co-tutelle PhD co-supervised with Henry Rousso.  “Vichy against Vichy:History and Memory of the Second World War in the Former Capital of the État français from 1940 to the Present”.  Winner of an FRQSC doctoral fellowship, the Geoffrey Adams Scholarship in French History, and the Faculty of Arts and Science Graduate Fellowship.

Marek Brzezinski (2008), Original Essay title: “The Ligue des droits de l'homme and the colonial question between the world wars”.  Winner of the E. E. McCullough Prize for the best M.A.

Katie Edwards (2004), Original Essay title: “Repression of things past: French memory, the Indochinese War and l'Express, 1953-54”. (Dr Edwards was winner of an SSHRC M.A. Canada Graduate Scholarship, winner of a Concordia Fellowship, and winner of the Richard and Carolyn Renaud Teaching Assistantship.  She went on to a PhD at the University of Toronto and is now a tenure track assistant professor at Tulane University in New Orleans, Louisiana)

Pacifism and the Peace Movement in France.  Special number of French History 18, 3 (September 2004).

“Pacifism, the Fascist Temptation, and the Ligue des droits de l’homme”, in Samuel Kalman and Sean Kennedy, eds., The French Right between the Wars: Political and Intellectual Movements from Conservatism to Fascism(Oxford and New York: Berghahn Books, 2014), pp. 81-94.

“Introduction” to the Special Number of French History on “Pacifism and the Peace Movement in France,” for which I was the Guest Editor, in French History 18, 3 (September 2004), pp. 253-55.

“Pacifism and the Liberation” in Roderick Kedward and Nancy Wood, eds., The Liberation of France: Image and Event  (Oxford: Berg Publishers, 1995), pp. 209-23.

“Ni droite, ni gauche? ... Or pacifism versus antifascism in late interwar France” in Proceedings of the Annual Meeting of the Western Society for French History, Vol. 17 (1990), 472-80.

28-30 June:  Paper read to a session on “The Great War, Pacifism and the Left” at the 29thannual meeting of the Society for the Study of French History at the University of St Andrews, Scotland.  Paper title:“The Big Bang Theory: the Great War and the Origins of pacifisme nouveau style”.

16-19 April:  Paper read to a session I organised, entitled “Getting Into and Out of a War: France and the Disputed Legacy of the Great War, 1914-1925” at the 61st annual meeting of the Society for French Historical Studies at Colorado College, Colorado Springs.  Title of my paper: “The Union sacrée, the Ligue des droits de l’homme and the Contested Origins of the Great War”.

26-28 September:   Paper read to an international conference on “The Great War’s Shadow: New Perspectives on the First World War”, hosted by the University ofCalgary at the Château Lake Louise. Paper title: “A Not-so-Sacred Union? The Ligue des droits de l’homme and the debate on War Origins and War Aims, 1914-1918”.

14-16 August: Paper read to an international conference on “The Academic World in the Era of the Great War”, Trinity College Dublin (for which I was also on the programme committee).  Paper title:“Women’s History, Feminist History, Gendered History? Feminist Pacifism and the Paradoxes of the Great War in France”.

24-27 April:    Co-Organiser of the 60th Annual Meeting of the Society for French Historical Studies, co-hosted by Concordia University and the Université du Québec à Montréal.  Theme of the conference: “War and Peace in French History with particular reference to the centenary of the First World War”.

4 April:   Paper read to the visiting speakers’ colloquium series in the Department of History at the University of Alberta.  Paper rtitle: “Looking at Things from the Other Fellow’s Point of View: British ‘Pacifism’, the Nazis, and the Origins of Appeasement, 1933-1937”

14 July:   Paper read at the 25th Annual Meeting of the Society for the Study of French History, Fitzwilliam College, Cambridge.  Paper title: “ ‘Bridge over the Abyss’?: The Ligue des droits de l’homme, the Deutsche Liga für Menschenrechte, and the Debate over War Origins and War Responsibilities”.

23 February:  Invited lecture given in the School of History and the Centre for the study of the Two World Wars, University of Edinburgh.  Title: “Nazi Germany and  British ‘Pacifism’, 1933-1937”.

24 February:  Invited paper read to a research seminar at the University of Dundee, Scotland.  Title: “Nazi Germany and British ‘Pacifism’, 1933-1937”.

8-11 April: Paper read to the 56th Annual Meeting of the Society for French Historical Studies, Arizona State University, Tempe, Arizona.  Paper title: “Human Rights and the Legacy of 1914: the Ligue des droits de l’homme and the Question of Conscientious Objection”.  This was part of a session I organised entitled “Les Fleurs du Mal: The Enduring Legacy of 1914”.