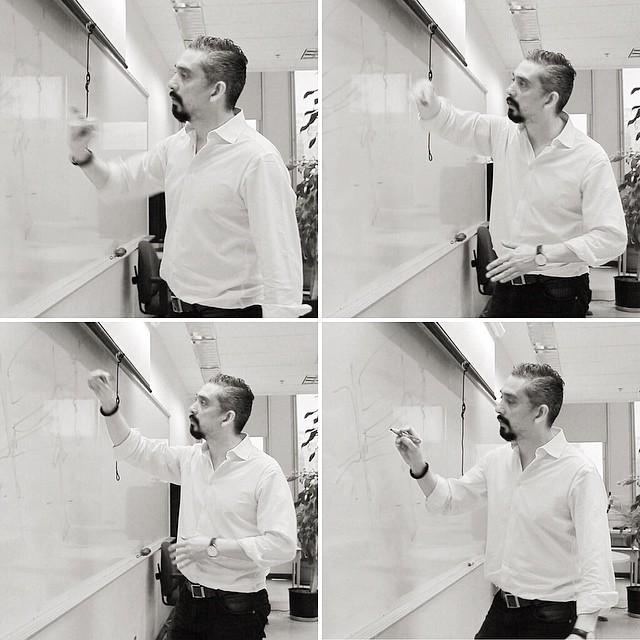 Silvano De la Llata is an urbanist and an educator. He is an assistant professor in urban planning and design in the department of Geography Planning & Environment at Concordia University. He received his PhD in City and Regional Planning from Cornell University (2014). He has taught design/planning studios and seminars on urban sociology, public space and history at Cornell University and universities of Tamaulipas and Anahuac (Mexico).
For the last 15 years, his research has focused on public space and the study of alternative uses, such as street vending, graffiti, public assembly and protest, as design/planning agents. His dissertation explores alternative planning processes in the context of protest encampments in horizontal social movements. He did research and participated in the
Indignados mobilizations in Barcelona, Occupy Wall Street and other social movements in 2011 and 2012.
Building on this experience, he directs the project Cities X Citizens, which focuses on the democratization of planning and urban design through participatory design methodologies and open-source systems. Bridging research, pedagogy and design practice, he developed urban design methodologies, open planning and planning-in-situ, to redesign interstitial spaces in Montreal through collaborative community engagement.

Additionally, he coordinates brainstorming/reading circles on critical theory and philosophy to develop strategies to democratize everyday life in the city.

Public space is also the physical manifestation of the publicinterest, and therefore is also the manifestation of conflict. However, publicspace and the public sphere is also the realm to debate about and solve thoseconflicts. This seminar explores how the notion of the public and public spaceplays a key role in the construction of democratic societies. It broadlyexplores the socioeconomic, cultural, political and physical dimensions ofpublic space. It particularly focuses on the tensions between how space isproduced and how it is (re)appropriated and (re)produced by its citizens, withthe objective of drawing lessons to enable a more democratic, inclusive andjust city-making. Drawing form theory, history and case studies, thisseminar analyzes how public spaces are planned and how different subjectivitiesemerged from those spaces, as well as how these subjectivities transform andreinvent themselves to change the spaces they inhabit. The notions of exclusionand inclusion, gender/race/age/class equity, gentrification and privatizationof public space, problems and potential of social networks, protest and theright to the city, as well as place-making and community planning would bewidely explored.

Urban space shapes people. The material and physical configuration of space enables certain activities and interactions while it contains and discourages others. However, people can also reshape and (re)appropriate their own space. City-making – be it urban planning/design, space regulation, urban development, social interaction, community engagement, etc. – plays out in a tension between these two approaches. Some spatial conditions allow better for people to engage in its transformation, others virtually prevent it. A key challenge in urban planning/design is to (re)create the conditions for urban transformation in spaces that are socially and physically detached from the urban fabric.

This course focuses on exploring urban planning/design strategies and tactics to (1) create vibrant, open and healthy public spaces, (2) to engage citizens in the creation of these spaces, and (3) to ultimately breach the disciplinary and conceptual divide between the human and the built environment in the city.

URBS300 - Neighbourhood and Community Planning (Since 2017)

This course focuses on the study of the history, theories, approaches and methods of community and neighbourhood planning. It particularly focuses on the relationship between the built environment and human interaction in the creation of communities. The course looks at community planning and engagement broadly. That is to say, it does not only focuses on normative and institutional planning, but in any process that ultimately shapes the city. Therefore, it goes beyond planning to explore the notion of citymaking. More particularly, it focuses on understanding the agency of ordinary citizens in citymaking and community building processes.

The dilemma of openness reflects a long-standing ontological debate about public space. The dilemma is between creating boundless spaces that allow for an infinite diversity of uses but lack coherence, and bounding spaces to secure coherence at the cost of diversity. The implications for the theory and practice of public space planning, regulation, management and design are fundamentally different. By analyzing movement, occupation and identity in public spaces in the context of protest, I explore the concept of spaces of becoming: a fluid approach to public space interpretation and an alternative to the ‘dilemma of openness.’

De la Llata, S. (2020). Beyond representation. Overcoming the trap of representation through autonomous organization and prefigurative politics in the square movements. Geoforum, 108, 70-79.

This chapter explores the potential of public space as catalytic of extreme and controversial manifestations of the right to the city: the right of resistance to oppression. It analyzes the right to the city by examining the right of resistance to oppression and what this means in an era of nonviolent insurgencies that use public space to highlight political struggle and democratic assembly. The 1DMX is key to understanding how cycles of repression operated in the ongoing criminalization of protest in public space and how, or if, this tendency can be reversed by civil society. The chapter also explores the notion of destituent power as an alternative to transcend the legitimacy-legality tension. It provides a brief description of how protest and repression operate in the Mexican political system, and make a detailed account of the events of presidential inauguration in Mexico City to illustrate different forms of tension between the right to the city and the rule of law.

This paper explores the question of transcending reactiveness in social movements. By analyzing the square movements, it teases out three ideas with which the movements engaged in theory and practice: (1) refusal, (2) destituent power and (3) creative resistance. These concepts did not operate as part of an explicit ideology but were rather enacted in the encampments, public assemblies and protest actions. Philosophy drew from practice. The first two concepts (refusal and destituent power) have been salient subjects of debate in the square movements and similar movements of resistance in the last twenty years. However, creative resistance is the least documented of the three, and I argue that it is the key to transcend the reactive stagnation (the “anti” stage) that social movements often face. The paper explores the question of how to escape the trap of shaping movements of resistance in function of the powers that are being contested. Going further, it analyzes the role of affirmative personal transformation and everyday life politics in social change. It draws from a two-year fieldwork and participation in the square movements (in Barcelona, New York, Paris, Montreal and Mexico City) and engages with texts and debates on the movements. It contextualizes these debates – historically and philosophically – in order to draw lessons for future social struggles. The square movements showed the importance of outrage as a triggering factor for social struggles, but also raised questions about the dangers (and ultimate futility) of dwelling in reactiveness. The article proposes that striving for creativity and engaging in proactive experimentation could be crucial attitudes to go beyond the sole acknowledgement of injustice. Ten years after the coming about of the square movements and with the prevalent culture of reactiveness and outrage, these questions are more important than ever in contemporary social movements.

Drawing from a historical analysis of informal uses of urban space in Mexico, this chapter analyzes uses and interpretations of public spaces that clash with their planning and design programs. It particularly explores the notion of urban resistance, understood as alternative readings of space that contest urban regulations and spatial programs and, as practices that remain in spite of historical and cultural transformations. The chapter concludes by reinterpreting a modernist esplanade in a hospital and by providing design proposals that incorporate amenities and an informal market to an otherwise precarious space.

Abstract The protest encampments of 2011 operated as spaces of resistance-through-creativity.Without an apparent overarching structure, the protesters engaged in different forms of interaction, encounter and organization. The spontaneous processes used to organize the physical space of the encampments provided lessons for the democratization of planning and city-making processes. Rather than in what was done in the encampments, the true lessons are more in how things were done –through mechanics that allowed potentially anyone from within or without the movement to actively participate in its development. To explore these ideas,this article makes a brief account of the case of the Barcelona Encampment in Plaza Catalunya in the Spring of 2011.

Open-ended urbanisms: Space-making processes in the protest encampment of the Indignados movement in Barcelona (2015) in URBAN DESIGN International

Abstract This paper studies the spontaneous and organic processes involved in the physical planning of protest encampments. Drawing from ethnographic work in the context of the Indignados Movement in Barcelona,it analyzes the spatial evolution and transformation of the Plaza Catalunya encampment in 2011. The encampments evolved in parallel to the conversations and questions that originated them online and offline. Thus, it particularly examines the notions of open planning (i.e. open-source and open-ended decision-making processes) and urban laboratories that the fieldwork indicates were tested in the space of the encampment. The objective is to understand how urban space can be planned through non-hierarchical space-making processes and without a homogeneous overarching structure. This paper situates in a larger discussion about alternative space-making processes such as insurgent, tactical planning,as well as in the recent conversations about open-source cities.