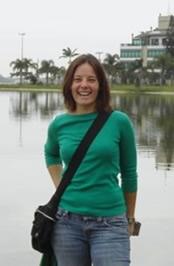 I arrived at CMLL at Concordia in Fall 2010 as an Assistant Professor of Spanish and Applied Linguistics, and as such, my research and teaching interests are interdisciplinary. My current research, stemming from my dissertation, involves second and third language acquisition of phonetic inventories. So far I have worked on languages such as English, Spanish and Portuguese, more specifically on the learning of the vowel sounds of these languages as second or third languages. As a relatively new researcher in the field of third language acquisition and phonetics, I am delighted to be at Concordia, as the linguistic profile of the Montreal population provides endless possibilities. I am also the director of the newly created Multilingual Speech Lab, open to faculty and student research needs.

As for my teaching interests, I especially enjoy teaching Phonetics and Phonology of Spanish, although I also very much enjoy teaching courses on Second Language Acquisition, Spanish Pedagogy and Hispanic Linguistics. I sometimes get to teach general Spanish Grammar and Composition courses as well. During my first year at Concordia I was involved in the Alternative Spring Break program, leading a group of fantastic Concordia students to the Dominican Republic on an amazing service learning trip.

On year 2 of my Concordia experience, I created the Concordia in Spain field school program with, a Spanish Language & Culture Summer program that has been going on every Summer since 2011 with the support of Concordia International and the Classics, Modern Languages and Linguistics Department. I directed the program for the first five Summers and look forward to many more Concordia in Spain programs to come.

PhD in Second Language Acquisition and Teaching - University of Arizona (2011)

Grammar and the process of writing I (undergraduate)

Phonetics and phonology of Spanish (undergraduate)

Perspectives on the teaching of Spanish (undergraduate)

History of the Spanish language (undergraduate and graduate combined)

Introduction to the teaching of Spanish (graduate)

“On the acquisition of Brazilian Portuguese mid-vowels by Spanish/English bilingual learners: A pilot study”. SCMLA Annual Convention in Memphis. October 2007.