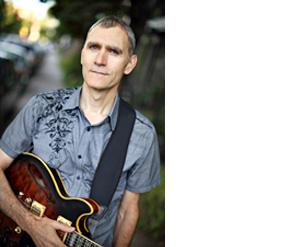 Greg Amirault is originally from Nova Scotia and has been living in Montreal for over 25
years. He has been teaching university and Cegep for 18 years and has a Masters Degree in Jazz Performance and Composition from McGill University.
He is the recipient of the Grand Prix de Jazz general Motors as a member of the Eduardo Pipman Quartet (Festival International de Jazz de Montreal). Greg is also the recipient of le Prix Opus for concert of the year with the Altsys Jazz Orchestra under the direction of Maria Schnider.

He has studied privately with Greg Clayton, Roddy Elias, John Abercrombie, Mick
Goodrick and Ben Monder and has attended workshops by Kurt Rosenwinkel, Gilad
Hekselman, Lage Lund and Jonathan Kreisberg.
He has two cd's as a leader " Acadian Folk Song " FND Records(1998) and " East of
the Sun" self produced (2013). Greg has been teaching at Concordia University since
September 2000.