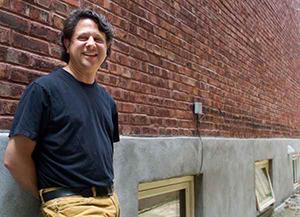 Norman Ravvin is a critic, fiction writer, and journalist. His essays on Canadian and American Jewish literature are collected in A House of Words: Jewish Identity and Memory (McGill-Queen's). The essays included in this volume focus on such writers as Eli Mandel, Leonard Cohen, Saul Bellow, Philip Roth, Mordecai Richler, and Chava Rosenfarb. A House of Words also considers the role of multiculturalism, postcolonialism, and the Holocaust in the reception of Canadian writing. He is co-editor of The Canadian Jewish Studies Reader (2004), which includes two essays by him, focusing on Eli Mandel and Matt Cohen.

His recent fiction publication is the novel, The Girl Who Stole Everything (2019, Linda Leith Publishing), which is set in Poland and Vancouver.  Previous fiction includes The Joyful Child (2011, Gaspereau),  Lola by Night, which appeared in Serbian translation, and the story collection Sex, Skyscrapers, and Standard Yiddish.  A story from it is in the The New Spice Box: Contemporary Jewish Writing (2020).  Other books include Hidden Canada: An Intimate Travelogue (2001) and the novel, Cafe des Westens, which appeared in 1991 and won the Alberta Culture and Multiculturalism New Fiction Prize. He is the editor of Not Quite Mainstream: Canadian Jewish Short Stories (2001) and Great Stories of the Sea (1999). Recent articles include a chapter on Canadian Jewish writers in the Oxford Handbook to Canadian Literature (2016); essays on Irving Layton, Leonard Cohen, and A.M. Klein in his co-edited volume Failure's Opposite: Listening to A.M. Klein (McGill-Queen's UP, 2011).  He contributed an introduction to George Walker's wordless biography of Leonard Cohen, which appeared in trade paperback and artist's special editions.  Earlier work includes an essay on "memory tourism" in Poland in Canadian Literature, a chapter on Jewish identity in a collection called Religion and Ethnicity in Canada, and an introduction to the reissue of Gwethalyn Graham's Earth and High Heaven from Cormorant Books. He is at work on a novel set in Poland and Vancouver, which will be excerpted in a forthcoming anthology from Toronto's Guernica Editions.

As general editor of a series in association with Red Deer Press at the University of Calgary and the Institute for Canadian Jewish Studies, he oversaw the publication of books dedicated to Canadian Jewish writing and history. Among the publications from the Institute is Mordecai & Me: An Appreciation of a Kind, by Joel Yanofsky. Norman Ravvin acted as editor of this study, which won awards in Canada and the United States. The Institute brought out, in collaboration with Red Deer Press, Henry Kreisel's 1948 novel, The Rich Man.  While chair of Concordia's Institute for Canadian Jewish Studies Ravvin oversaw two chapbook series focused on Canadian Jewish literature and history. The titles in these series include a long short story by Toronto writer Cary Fagan, and a translation of a document dealing with early Montreal Jewish history, by Ira Robinson. A novel, The Girl Who Stole Everything, set in Poland and Vancouver, 2019, Linda Leith Publishing, Montreal.

"On Refusing Canada, CanLit and More: National and Literary Identity in All its Varieties," in Studia Anglica Posnaniensia, 2020.  Special Vol. Ed. D. Drewniak.

"Placed Upon the Landscape, Casting Shadows: Jewish Canadian Monuments and Other Forms of Memory," in Canadian Jewish Studies, 2021.

"Pictures of New Canadians: An Immigration Story for Our Time," in No Better Home? Jews, Canada, and the Sense of Belonging.  Ed. D. Koffman.  U of TP, 2020.

"You Say You've OD'd on Leonard Cohen: Canadian Jewish Writing and the Mainstream," in The Oxford Handbook of Canadian Literature, ed. Cynthia Sugars.  2016.

"The War and Before: Responses in Mainstream Canadian Literary Life" in Nazi Germany, Canadian Responses, Confronting Antisemitism in the Shadow of War. McGill-Queen's, 2012.

Involvement with the more recent Hungry I Chapbooks:

Hungry I Chapbooks' translation of Franz Kafka's Josephine the Singer or The Nation of the Mice, trans. Karin Doerr, Barbara Galli and Gary Evans.

Hungry I Chapbooks' Shuln and Shulelach: Large and Small Synagogues in Montreal and Europe, by Sara Ferdman Tauben, 2008.

Hungry I Chapbooks' Opening The Star: Three Responses to the New Translation of Franz Rosenzweig's The Star of Redemption, 2005.

As part of the launch of The Girl Who Stole Everything Ravvin took part in a writers' round table in Lodz, Poland, introducing the novel to Polish readers.  The event took place in Sept. 2019, at Lodz's Dom Literatury on ulica Roosevelta, along with writers Bill Gaston, Dede Crane and John Gould.

Online reading and introduction of my novel, The Girl Who Stole Everything, with music by Alexander Ravvin, as part of the Jewish Public Library's virtual literary salons (May 2020) at:

Ten Pictures: An Immigration Story for Our Time

Ten Pictures: An Immigration Story for Our Time is a richly researched personal memoir.  Its focus is my grandfather’s emigration from Poland in 1930, first to the Canadian west coast, then to the Saskatchewan farming towns of Dysart and Hirsch.  These landed him in the Qu’Appelle Valley and then south, near the American border, at the outset of the Depression.  His decision to leave his wife and children behind was based on Canadian immigration rules, which barred most Jews, excepting single men who were sponsored by a relative in Canada.  The trick, upon beginning anew in Saskatchewan was how to circumvent bureaucratic and governmental resistance and acquire the “permits” that would allow his family to board a ship at Gdansk to join him.  Part of his strategy was to not take no for an answer.

Through my travel in Poland and across Canada, and extensive research, including uncovering my grandfather’s letters in Canadian archives, I offer a rich literary portrait of his times.  I focus on the early thirties under R.B. Bennett’s Conservatives, years that are not part of the familiar “None Is Too Many” narrative of prewar Canada.  My grandfather’s life on the prairies was distinctive.  He took up the role of shoichet (ritual slaughter), teacher and de facto rabbi in rural communities that are outside the typically presented urban immigrant milieu.  In these small places, his modernizing and Polonizing youth retreated in favour of a new traditional Jewish identity.

My grandfather’s unyielding efforts to recover his family led to a remarkable correspondence and bureaucratic struggle, which I reconstruct by way of his Yiddish-language letters, as well as the correspondence of government, immigration department and Jewish communal figures.  These players are varied and revealing – R.B. Bennett and his ministers come into view, as does Lillian Freiman, an unusually influential community worker and philanthropist in Ottawa.

My grandfather appears as a prismatic figure; like the crystal on the cover of Pink Floyd’s Dark Side of the Moon record, through which the light refracts and takes on clear shape and colour.  His story is that of CANADA, c. the early thirties.  It rides its own hard-to-believe rails, yet its events and personalities remain relevant to contemporary North American life.