‘Our John Molson community is a strong one’ 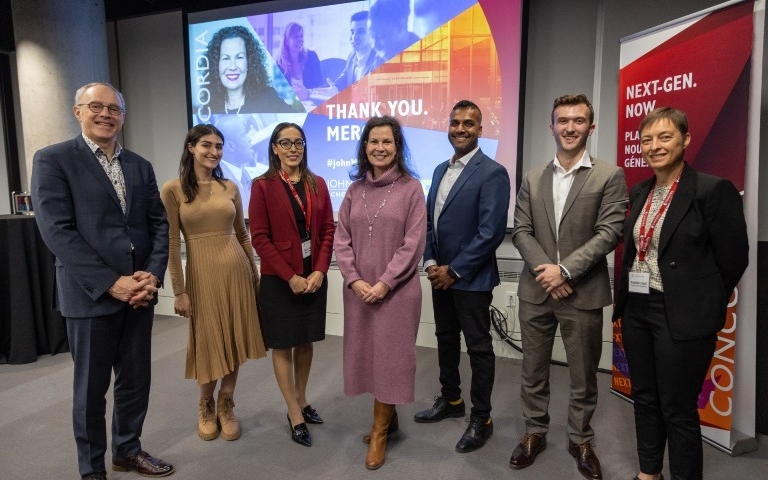 With the theme “For the betterment of business and society,” the day included a ceremony at the Concordia University Conference Centre to honour two MBA Alumni of the Year Award winners — Luc Bisaillon, MBA 93, and Karna Gupta, BComm 77, MBA 79 — and hear from four John Molson standouts.

“Our John Molson community is a strong one,” said Dean Anne-Marie Croteau. “Together, we have collectively created an institution that has had an impact on both the local and international level. It is an honour to be a part of this movement for the betterment of business and society.”

The dean’s remarks capped a day in which prizes were handed out to students with the best John Molson swag and the hashtag #JohnMolsonSchool was used on multiple social media platforms.

Watch: Video recording of “For the betterment of business and society”

And the award goes to …

The MBA Alumni of the Year distinctions were awarded by the Concordia University Alumni Association and celebrated just months after the graduate program was ranked in the top 100 worldwide by The Economist.

After Croteau introduced Luc Bisaillon and presented him with his award, the managing director of RBC Corporate Client Group, Quebec, praised the flexibility Concordia gave him to complete his degree by attending evening courses, and fondly recalled the many friendships he developed along the way.

“It’s very important for me to underline that the MBA program isn’t only about the technical knowledge you receive or the courses on offer,” noted Bisaillon. “It’s about what happens in between as well.”

Fellow winner Karna Gupta, whose success as a tech executive has advanced firms like Bell Canada, Certicom and LAB Canada, was unable to attend the celebration in person. He was honoured at a private luncheon on November 30, following a 4TH SPACE panel discussion on “The Role of Experiential Learning in a Thriving Economy.”

Geoff Molson, president and CEO of Groupe CH, remarked in a special video message to students and business-school alumni: “I am proud to celebrate John Molson School Day with you. Thank you for taking so much pride in our school.”

Attendees of the MBA Alumni of the Year ceremony were also treated to presentations by:

In a nod to this year’s John Molson School Day theme, Lloyd shared details about her research on corporate sustainability initiatives and how they mostly fall short of targets established by the Paris Agreement, the legally binding international treaty on climate change.

“Should business primarily exist to sell more, increase profits and generate returns to shareholders?” she asked. “We need to figure out what a competitive business is in an equitable and just climate future.”