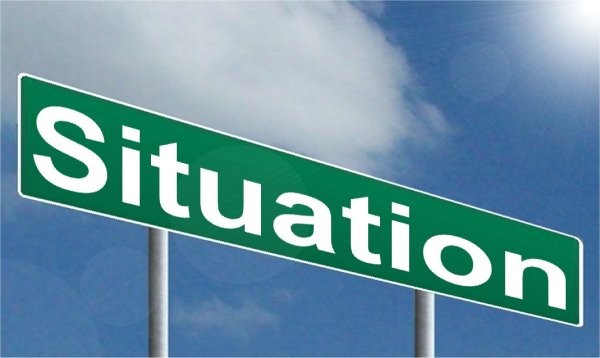 Here’s the situation in Shirley Jackson’s “The Lottery:” once a year, a New England town stones one of its residents to death. In Alfred Hitchcock’s The Birds, the situation is that birds have started attacking humans. In Franz Kafka’s “The Metamorphosis,” Gregor Samsa wakes up as a bug. In the face of such overwhelming states of affairs, the rest is details.

Situations may be confined to the experience of a single character or they may encompass towns, regions, or worlds. They may pre-exist the beginning of a story or emerge at any time, and they may or may not come to an end. They may be immediately evident to the characters, or they may require gradual unfolding or disclosure.

With roots in theatre, the term captures some non-verbal elements of narrative. Yet situation has gone mainly under the radar as a narrative concept until now for reasons that themselves are interesting. It has sometimes been theorized, but the term more often remains vernacular, perhaps a key condition to its promiscuous wandering across discourses and practices.

Our goal is not to ossify it by dictating applications but to explore its history and observe its usefulness in various genres of including literature, performance, film, TV, and games. How does the intermedial conversation that the concept of situation demands reshape our understanding and creation of narrative more generally?

This interdisciplinary group of faculty and graduate students meets twice each term to discuss shared readings and workshop presentations by members. Our fall schedule of activities will be posted soon.