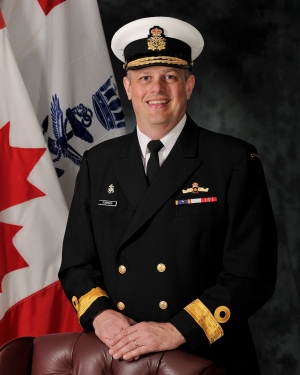 Life aboard a submarine is anything but normal — and it’s something most of us will never experience.

The way Concordia grad and Commodore Christopher Robinson, BComm 91, came to it provides an interesting insight into his personality and motivation.

“I liked the idea of a small team, the informality, the meaningful work and the world travel; a combination of all of that,” explains the Director General of Naval Force Development and Royal Canadian Navy veteran with 27 years of experience — including 1,400 days at sea.

“When I went down to the recruiting centre, in my last year at Concordia, it was the only choice I put down: I wanted to work in submarines.”

‘Passing the Norwegian course was my career highlight’

Robinson jokes that he initially made the decision to join the navy after seeing Das Boot, the German submarine war movie, but the fact that his older brother joined had an impact on his career choice as well.

“I grew up sailing on Lake of Two Mountains, Quebec, so I had a love of water. My older brother joined the navy midway through my university years, which was my first exposure to it,” he says. “I followed in his footsteps, I guess, even though I didn’t intend to.”

Robinson began his military career in the Canadian Army Reserves as a Combat Engineer, in the 3rd Field Engineer Regiment in Montreal. Following university graduation, he joined the Royal Canadian Navy and underwent Naval Warfare Officer training aboard patrol craft, minesweepers and destroyers, before volunteering for the “silent service.”

Over the years, he served aboard Her Majesty’s Canadian Submarines Onondaga, Ojibwa, Victoria, Corner Brook, Windsor and Unseen. He also took part in many international missions aboard American, British and Norwegian submarines.

“The Norwegian course is a highlight that all submarine officers strive for and it’s unique, because you only get one chance at it,” Robinson explains. “If you fail, they surface the submarine and take you off; you never get the chance to get on another submarine again. The pass rate is less than 50 per cent and passing it was my career highlight.”

Robinson’s shore assignments have included attending the Joint Command and Staff Programme at the Canadian Forces College in Toronto, the Naval Command College at the U.S. Naval War College in Rhode Island and serving on the Naval Staff.

He assumed his current position at Naval Force Development in July 2019.

“There’s a fair amount of study that goes on in your off hours, because you’re always learning more for the next role,” says Robinson, who also holds a Master of Business from the University of Ottawa, a Master of Defence Studies from the Royal Military College of Canada and a Certificate in Fire Service Leadership from Dalhousie University.

“One of the nice things about the military that we don’t get enough credit for is the commitment to lifelong learning.”

Robinson’s passion for learning was sparked at Concordia, where he enrolled after graduating from John Abbott College. “Most of my courses were at Loyola and it was a phenomenal campus because you always ran into the same people, so it was a great opportunity to build your networks and friendship bases.

“Concordia set me up to do anything: formalized problem solving, rigorous analysis, cross-cultural understanding, conflict resolution and working in teams. All things that I’ve used in my life, in the military, volunteering, even in sports, because they’re real skills.”

Despite the demands of a busy career, Robinson also managed to serve as volunteer firefighter for 20 years, a Revenue Canada volunteer for 10 years and a Scouts Canada leader for 15 years.

“I’ve been very lucky in life and feel that I have a responsibility to share the good fortune,” he says. “My advice to young people who are just starting out is to find something that you’re passionate about, no matter what it is.”