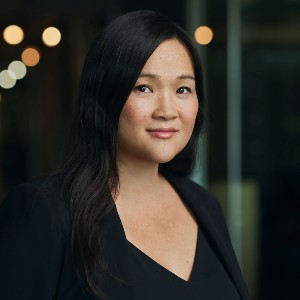 When France Wong, BComm 00, was a Concordia marketing student, she joked with her friends that she would one day own part of Cossette, the largest independent Canadian advertising agency at the time.

“It’s still a very large company, but it’s no longer independent, so I missed my chance,” she laughs. Nevertheless, the essence of her dream came true: she was recently made a partner at BleuBlancRouge, an independent agency whose clients include major brands such as Desjardins, McKesson and Bombardier.

Wong also worked for Cossette along the way, thanks to her participation 22 years ago in a competition known as the Relève Publicitaire. Now called the Relève Marketing, it’s an annual event where undergraduate students prepare a marketing plan in response to a concrete brief from a real client. Wong joined Concordia’s team after a discussion with Harold Simpkins, BA 67, MBA 78, the academic director of the John Molson School of Business’s Marketing Co-op program. “I said I was interested in the advertising side of marketing, because I liked commerce, creative work and psychology,” she says. “And he mentioned the Relève.”

Coached by Simpkins, Wong and her teammates won the competition in 2000 by impressing the Dairy Farmers of Canada — and their marketing agency, which just happened to be Cossette. Wong landed an internship at the company that quickly led to a permanent position as an account manager. From there, she took on increasingly high-level roles in the industry.

Wong’s latest position involves leading both of BleuBlancRouge’s offices, located in Montreal and Toronto. They each have a different market, culture and language, so her bilingualism — acquired as an adult — will be invaluable.

“My background is unique,” she says. “I was born in Hong Kong, so I’m Chinese. My parents moved to Victoriaville in Quebec when I was less than a year old. It’s a small French town, so I wasn’t exposed to a whole lot of English.”

Determined to equip herself for business on a national level, Wong decided to attend Concordia, where English would be the main language of instruction.

A different style of leadership

Upon graduating, Wong noticed that she was not the typical advertising professional. “As an Asian and a woman, I’m often asked to give my perspective on diversity within the industry,” she says. “And I actually like to respond by talking about the diversity of people’s personalities, and how each personality type comes with strengths and challenges.”

On the spectrum between introversion and extroversion, Wong is naturally inclined towards the former. “When I first started out, a quieter, more collaborative person wasn’t who people in my field were looking for,” she says. “They wanted people who talked loudly, especially when they were defending their ideas. I had to learn to become more of an extrovert.”

Since then, the ad world has improved when it comes to recognizing the strengths that introverted people can bring to a company’s executive level, Wong says. One of her colleagues at BleuBlancRouge praises her as “a breath of fresh air as a leader” who listens to everyone’s opinions. Another one describes her as “determined, bright, calm and inspiring.”

BleuBlancRouge has cultivated a culture of co-creating with its clients, as opposed to creating something for them. “When I arrived four years ago, we were onboarding Desjardins as a new client,” Wong says. “They’re a co-op, and they’re all about collaboration. Any agency can deliver a campaign, but more and more clients are interested in really taking part in the process. It gives them a better experience.”

Since 2021, Wong has been facilitating the event that launched her career. Each year, she mentors students participating in the Relève Marketing contest and helps to ensure the experience reflects what real-world marketing work is like.

“It’s a way of giving back,” she says. “Because it gave me so many opportunities.”