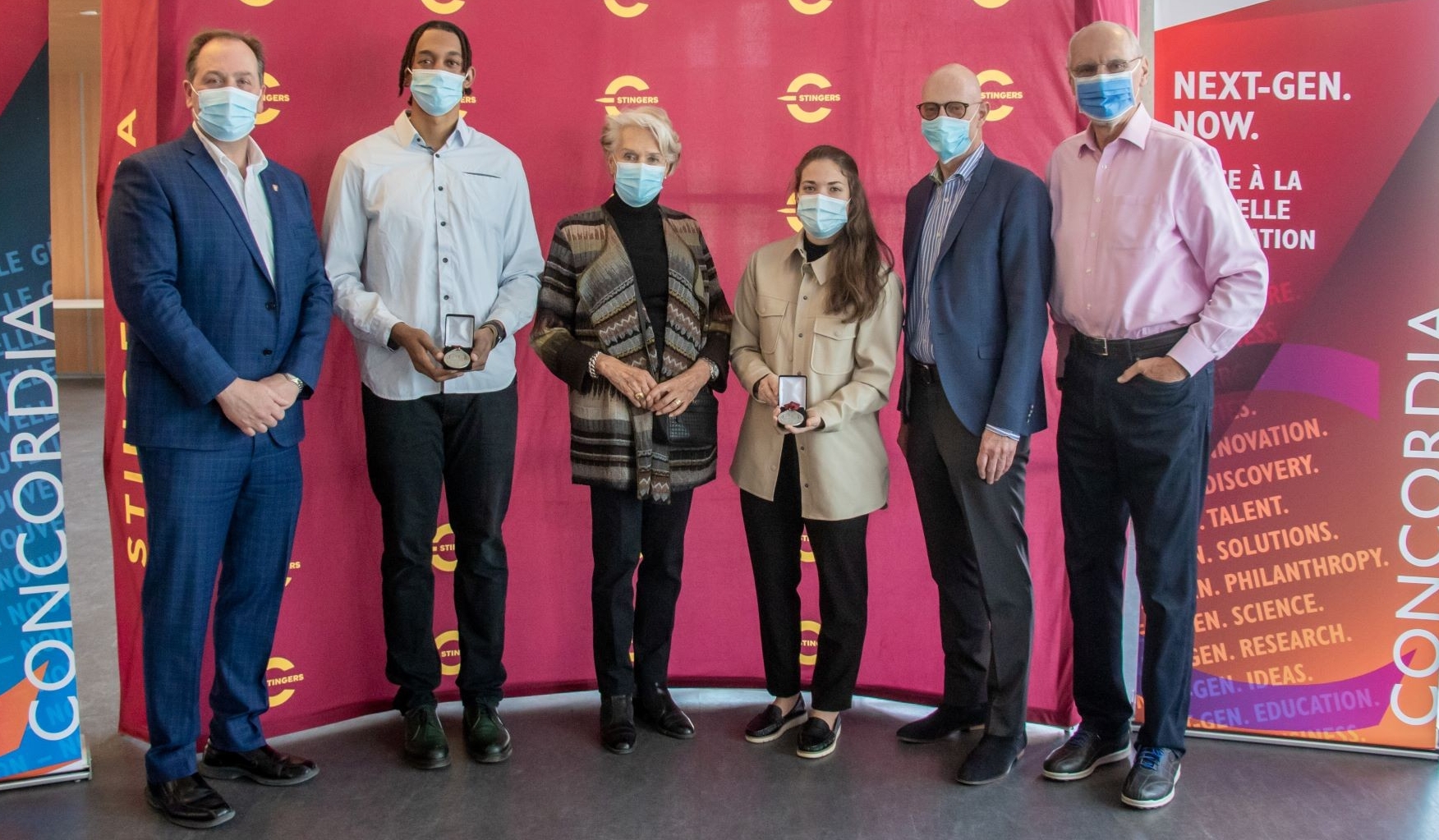 The inaugural Joe and Ben Weider Athletic Leadership Awards, a new initiative to celebrate the diverse accomplishments of varsity athletes at Concordia, were presented on campus on March 16.

The awards were established with a $320,000 pledge from George Lengvari — BA 63, recipient of the 2021 U SPORTS Mitchell Family Alumni of the Year Award — with additional support from the Weider Foundation and Terry Tretiak, president of Lengvari Capital.

Named for Lengvari’s mentors, Montreal fitness icons Joe Weider and Ben Weider, the annual awards will honour one female and one male student at Concordia who demonstrate excellence in academics, varsity athletics and community engagement.

The Weider honours came with an engraved medal and financial support of up to $5,250 for tuition expenses.

This latest gesture by Lengvari, a Concordia Sports Hall of Famer, adds to a remarkable legacy of generosity at the university, said President Graham Carr. “George Lengvari is truly an inspiration to the Concordia community. Thank you for your generous and selfless service.”

Lengvari, who served as a senior vice-president and vice-chairman at Weider Health and Fitness from 1994 to 2009, remarked that “the Weiders were great friends, mentors and benefactors.”

“I wouldn’t be here today if I didn’t have the opportunity to work with them. These awards in their honour are about creating a legacy. This is my thanks to Concordia. I’m not paying it forward — I’m paying it back.”

In her introduction of Laganière, women’s hockey coach Julie Chu said: “Brigitte worked hard to earn multiple academic and athletic All-Canadian honours. She not only does an amazing job on the hockey side but also on the community side — and that’s what we’re really proud of.”

“I take pride in saying that I play varsity sports. Six years ago, I almost didn’t come to Concordia because I was afraid that my lack of English would hold me back. Now I’m inspired to give back to the younger generation, especially in the promotion of girls and women’s hockey.”

Stingers football coach Brad Collinson, BA 05, said that Sylvain was a model player on and off the gridiron: “Malick is the first one to volunteer whenever we have a community event. He truly cares and has persevered in everything he has done.”

“This award is validation that I’m following the right path,” said Sylvain, a third-year Department of Religions and Cultures undergraduate. “I want to thank George Lengvari. It’s amazing what you’ve done for Concordia. I hope to make a similar contribution one day.”

Event emcee Paul Chesser, BA 94, GrDip 97, vice-president, Advancement said: “These awards will forever link Joe and Ben Weider — two Montreal fitness and business icons — to Concordia. Thanks to George Lengvari’s example of service and philanthropy, our student athletes will be inspired to give back as well.”