As Montreal’s WAM Media Group gears up for Season 3 this January — its roster is packed with alumni
|
By Maeve Haldane
Source: University Advancement

Concordian James Tupper in Season 3 of The Detectives

The awards bolstered Concordia’s cachet as an incubator of creative talent, from James Tupper, BFA 92, of Big Little Lies fame, to director Stephen Surjik, BFA 82, whose credits include the Netflix hit The Umbrella Academy.

Tupper himself was cast in two episodes of Season Three of The Detectives. The actor plays Hank Idsinga, the Toronto homicide detective whose work led to the arrest of serial killer Bruce McArthur.

Based in southwest Montreal, WAM was started in 1993 as Whalley-Abbey Media by home designer Debbie Travis and Hans Rosenstein. The company became WAM Media Group in 2016 when Concordia grads Petro Duszara, BA 98, and Scott Bailey, BA 01, joined as partners and executive producers. Another alum, Jennifer Gatien, BA 97, is also an executive producer.

Pelletier found his time at Concordia “hands-on and inspiring” and fondly remembers cinema professor André Herman: “He helped with the language of film. He was very influential for a lot of us.” 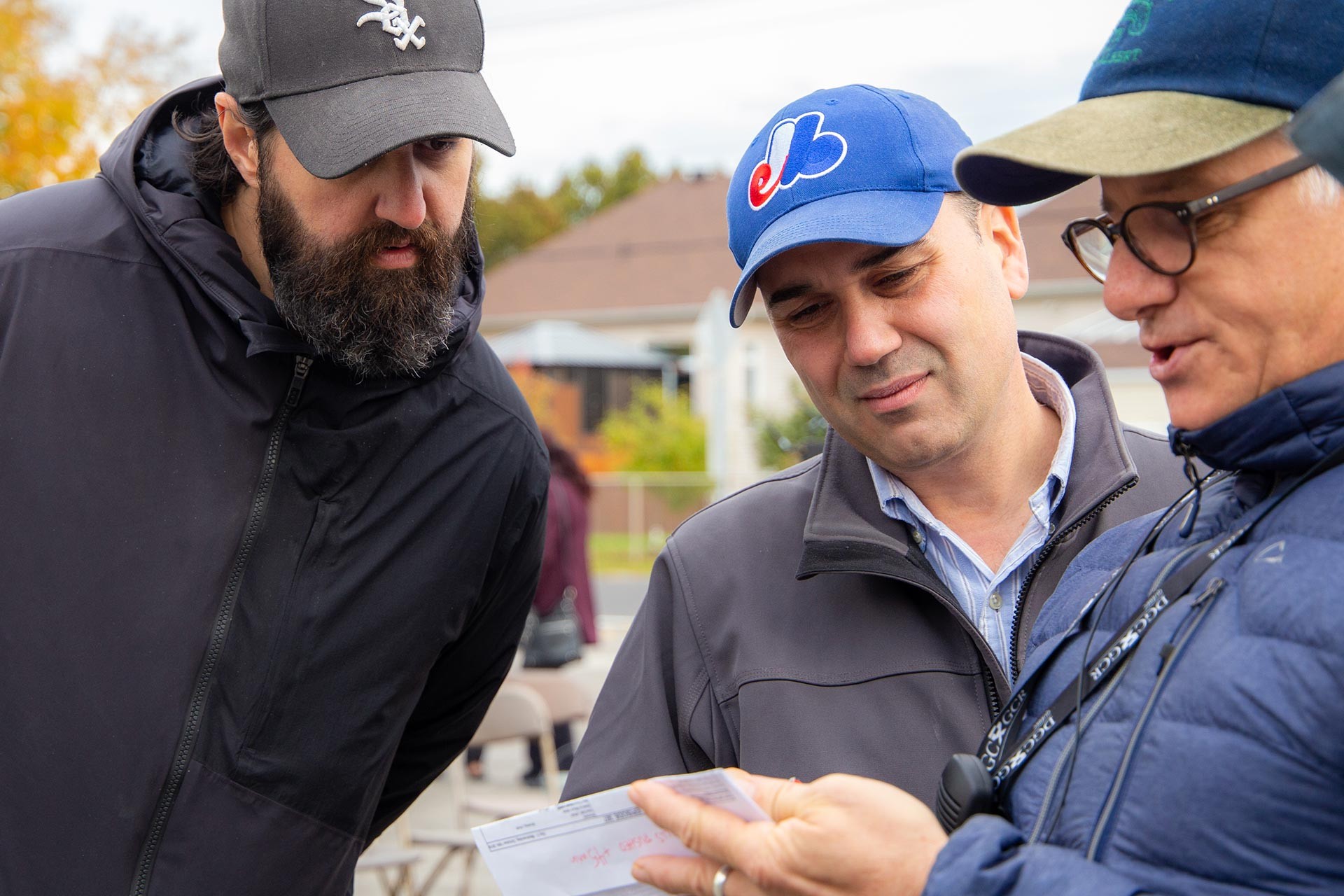 Eric Sabbag, Petro Duszara and Pierre Roy on the set of The Detectives

The Detectives consists of interviews with actual police detectives, interspersed with re-enactments of events related to difficult cases. Each one-hour episode is shot with a different cast in and around Montreal and Laval.

WAM initially developed the concept for a Netflix project, Real Detective, that ran for two seasons. When it first considered the genre of true crime, the company knew it wanted to take a sensitive, and not sensationalist, approach.

“That was really important,” says Gatien. “There had to be a way where we felt we were somehow helping the families of the victims, or the detectives.”

WAM tailored the concept for CBC by seeking out landmark Canadian cases that somehow changed legislation or how a police department operated.

“We thought that made the show better and smarter,” says Duszara, who also serves as showrunner.

The heavy subject matter can exact a toll, Gatien admits. “You check in on each other. Sometimes the costume designer will come and say, ‘I’ve just read the script, that was a really tough one’ and she’ll give me a hug. There’s a sense of solidarity.”

It helps that the culture at WAM is tight-knit. “I don’t know other industries, but ours is so strange and so challenging that having people you know and [trust] is really important,” says Bailey.

“We want to be a production company where people want to work,” adds Gatien. “Where they feel there’s collaboration.”

The fact that WAM pays above industry standards is a plus. Staff also relish the opportunity to work in Montreal, a city known for talented and experienced crews.

“It sounds corny [but] we think there’s a richness that comes from this place,” says Bailey.

Season three of The Detectives premieres on Thursday, Jan. 9, 2020, at 9 p.m. on CBC. Viewers can also catch it at cbc.ca/thedetectives and gem.cbc.ca.