Winning project by Eco Youth empowers the young and marginalized 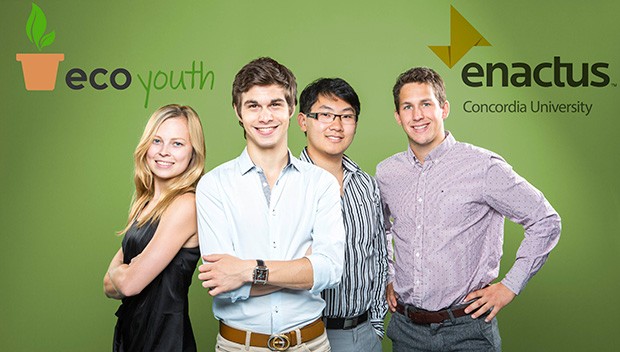 It’s called Eco Youth and it’s exactly as noble and dynamic as it sounds. A sustainability project created and run by Enactus Concordia, Eco Youth earned top prize in the Environment category at the Forces AVENIR Gala, held in Quebec City on Wednesday, September 17.

Concordia’s Eco Youth focuses on helping integrate, socialize and empower marginalized youth through sustainability education, and provides them with the opportunity to experiment with urban agriculture.

William Atsaidis, president of Enactus Concordia, has watched the project grow for the past four years and was overjoyed with the win. “It really validates where the project is going, and what it has done so far,” he says. “We want to show kids that urban agriculture is possible in big urban centers, and it’s going to be increasingly important as cities grow.”

Since 1999, Forces AVENIR has been honouring student-led projects, which contribute to socially conscious community development, while encouraging commitment and responsibility to achieve their goals.

“Forces AVENIR attracts the best and brightest students applying themselves to social entrepreneurship initiatives, so being selected for the prize is extremely prestigious,” said Concordia’s Dean of Students Andrew Woodall. “Concordia students behind Eco Youth can number themselves among some of the most successful student-led projects in the Province.”

The Forces AVENIR Gala was held in Quebec City’s Théatre Capitole. Atsaidis was there with three Enactus/Eco Youth teammates — Kaitlin Trillwood, Nicholas Palfreeman and Yusudan Ren — to present their project and accept the award.

“It was nerve-wracking, obviously, but when they said Eco Youth was the winner in the environment category, we were ecsctatic,” Atsaidis says.

Eco Youth, which is sponsored by Concordia’s Sustainability Action Fund, currently partners with Innovation Youth, a downtown Montreal centre that provides help and support to mainly first-generation immigrants between 12 and 24 years of age.

The collaboration provides young people with the opportunity to participate in a sustainable gardening program. All the harvested crops are used in the centre’s cooking classes.

“There is the social aspect of the program, where the kids are growing personally and I think that’s the real kicker,” says Atsaidis, adding, “It’s really what sets it apart from the rest.”

The project empowered over 20 newly arrived Canadian youths this year and has plans to expand. Eco Youth recently partnered with Carrefour Parenfants to build a small greenhouse in the Hochelaga-Maisonneuve district.

The Eco Youth team plans to use the $4,000 prize money from Forces AVENIR to build another greenhouse, either for Innovation Youth downtown or for another youth centre in the city’s west end.

“We’re dedicated to making it grow. The focus is less on the bottom line - it’s all about helping society, helping the kids see that the environment is important, and that there is a way to help out, even if it’s a small step,” says Atsaidis.

Enactus is an international network of students, academics and business leaders that is dedicated to contributing to societal development through entrepreneurship.

Find out more about Forces AVENIR.

The Concordia Council for Student Life (CCSL) provides funding for student projects through its Special Project fund. The Fall deadline for applications is Friday, October 10. Find out more.