International group of artists and designers reimagine the ecological impact of the image and the gallery
|
By Olivier Du Ruisseau
Source: Faculty of Fine Arts 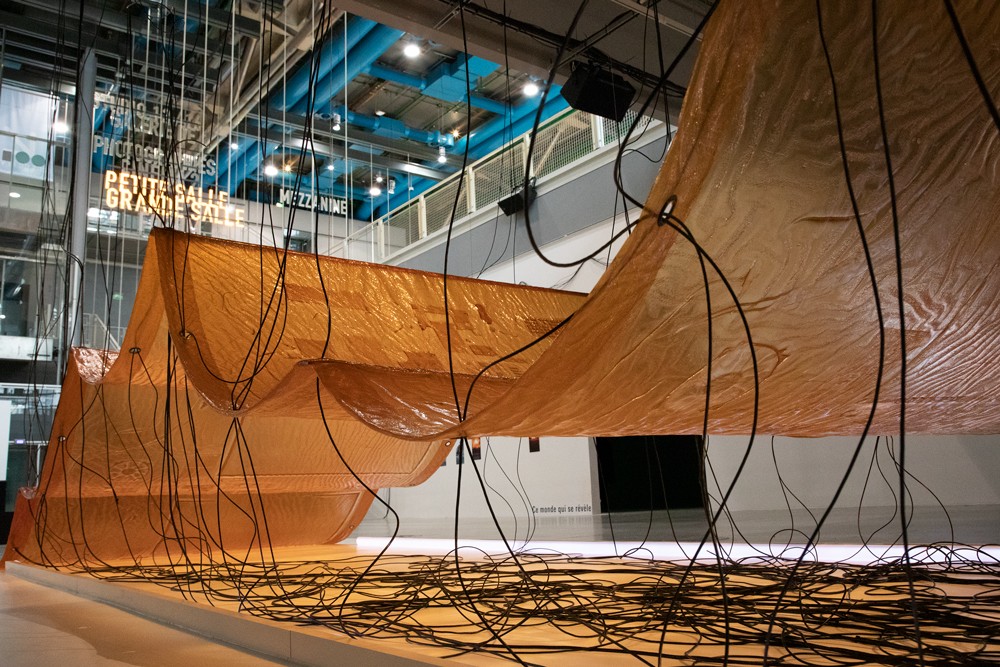 The bioplastic membrane and site-specific installation Fossilation at the Pompidou Center.

Fossilation is a more than seven-metre-long bioplastic membrane, site-specific installation that will be exhibited at the online festival Hors Pistes 2021 in the Pompidou Centre in Paris from February 1 to 14.

The idea for the membrane emerged from an ambitious international research-creation project funded by the SSHRC and other partners. Their goal was to develop bioplastic membranes, using science and technology to create a more sustainable artwork.

“For the context of this exhibition we asked ourselves how we could best reflect on the materiality of images, and minimize the ecological impact of images,” Jarry says. 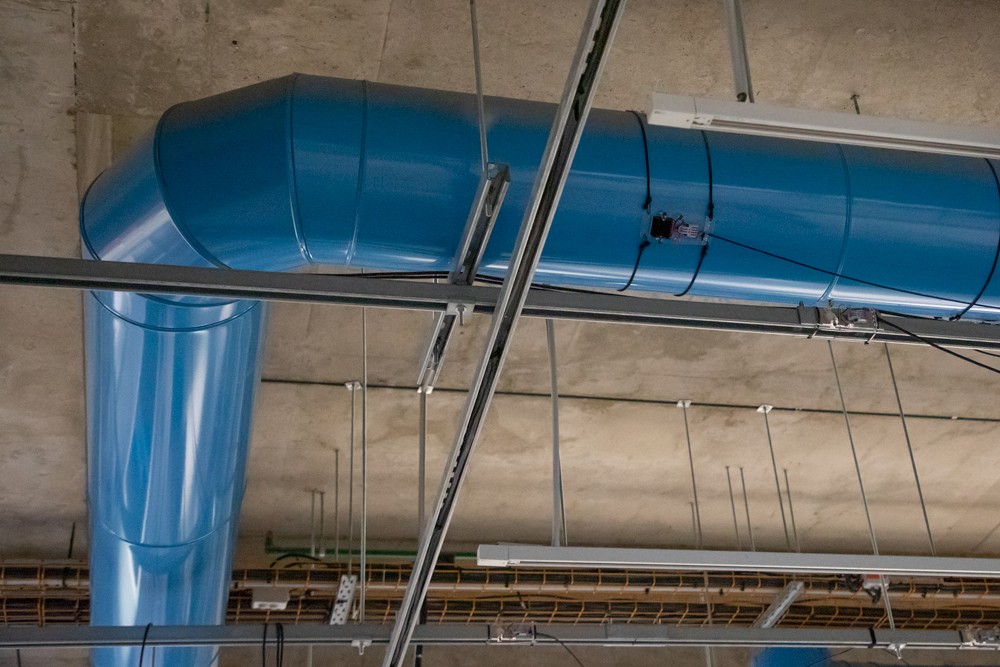 The work absorbs the residual energy of the building's architecture to power its light patterns.

The membrane is a site-specific installation, created with the festival and the building in mind. It is entirely made of bioplastics (plastic materials produced from renewable biomass sources) and leverages residual energy from the museum’s architecture, specifically heat waste from the Pompidou pipes, to produce it’s own light system.

It contains a structure similar to silicone and the bioplastic is composed of agar, water and glycerin. Its color results from the addition of a vegetable dye based on organic materials such as onion peel or grape skin.

The footprints of recycled technological objects such as screens and keyboards were also directly molded on the membrane, deepening the object’s symbolic relationship to its core ideas of ecology, circularity and reuse.

“The project itself plays out as a mise en abyme of the concept of the membrane, as the complexity of the material quality echoes its complex collaborative process,” says Maria Chekhanovich, a Concordia Studio Arts MFA student working on the project.

'It was surprisingly easy to work together across such distances' 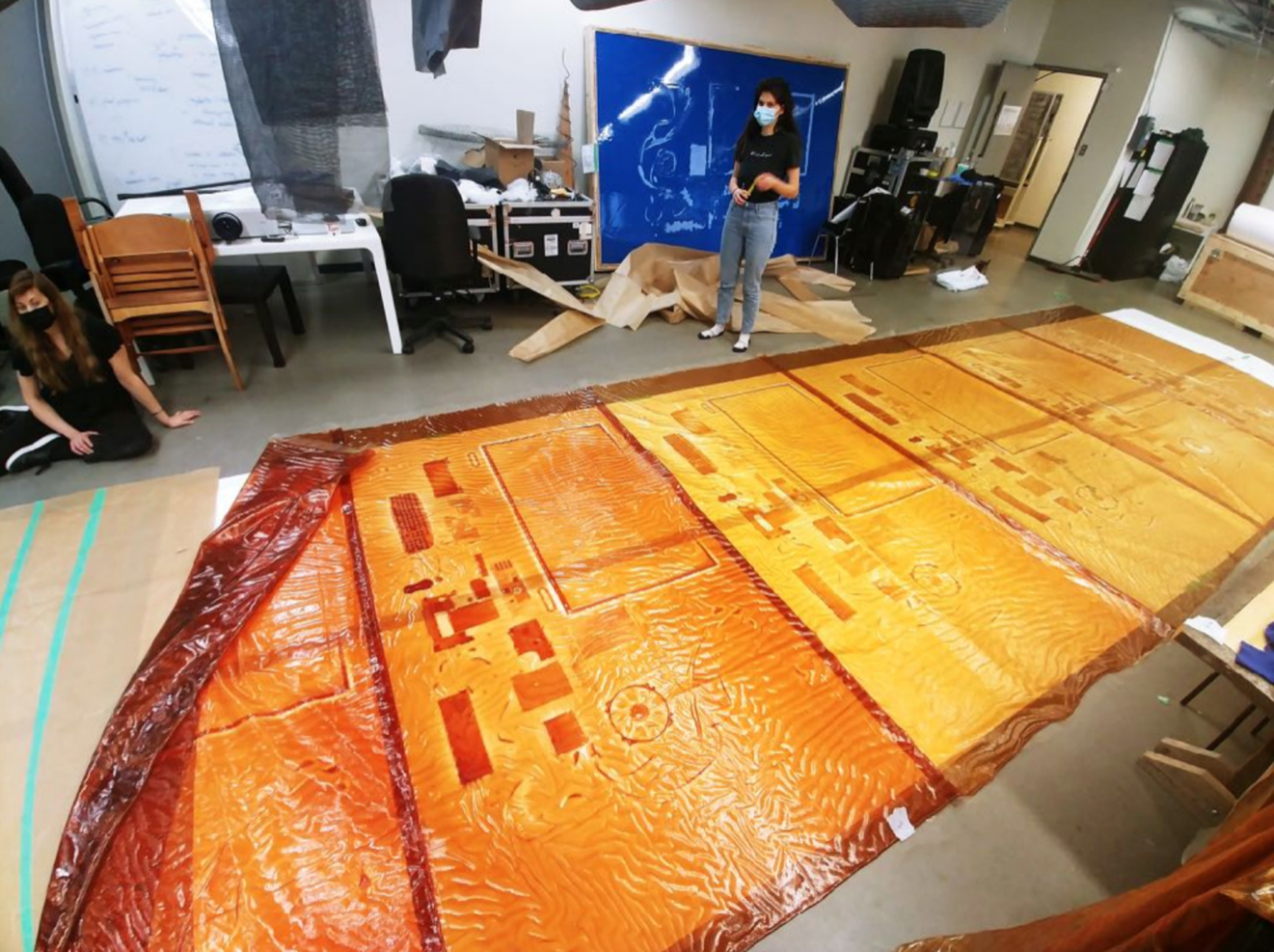 Maria Checkanovich stands next to a segment of the bioplastic membrane. She is a Concordia graduate student and researcher in the Biolab who helped to develop the installation from Montreal.

Creating the installation required the combined effort of dozens of people in different cities. Bringing together the many threads involved countless virtual meetings and the use of many visualization and modeling programs.

“The membrane plays a representational role in the gallery, but also represents, more broadly, a working effort, and the idea of a membrane as a living entity with political ramifications, even,” says Boucher.

Teams in Montreal, Toronto and Paris, worked concurrently, collaborating from their respective labs. The U of T and Concordia teams, which included the Biolab at the Milieux Institute working under Jarry, developed the materiality of the membrane and its residual energy capture system; the French artist-researchers under Bianchini were crucial in adapting its design to the context of the museum. Last week the assembled artwork was sent from Montreal to Paris to be installed in the Pompidou Centre.

Boucher compares the act of realizing the project to Andrew Pickering’s theory of the dance of agency, where “theory, practice, concept, technical constraints and material possibilities all dance together with shifting notions of agency, creating a beautiful, complete yet harmonious, chaos.”

“It was surprisingly easy to work together across such distances,” says Vanessa Mardirossian, a Concordia PhD Student who worked on the membrane. 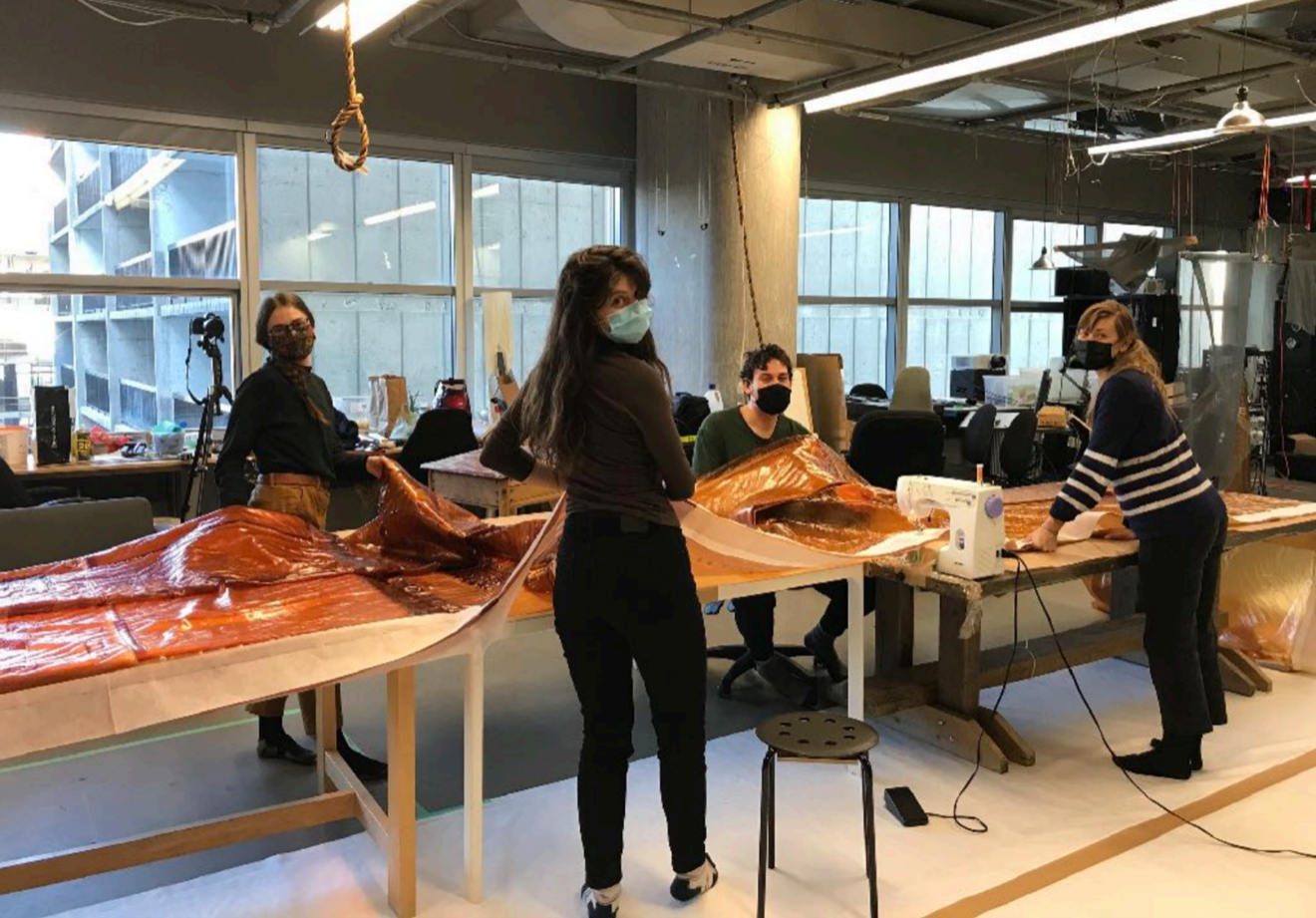 The Concordia team assembles various parts of the membrane.

Due to new social distancing measures imposed by the French government, it was announced last week that the Hors Pistes festival will entirely be held online. The best way to see and learn about Fossilation will be to take part in this virtual event. Dozens of participants will take part in a virtual visit and conference organized as part of the Nuit des idées 2021.

The virtual visit will introduce the work to the public prior to the official opening of the exhibition. It features debates and conversations around research creation and the ecology of images. The event is organized in partnership with the Museum of Arts et Métiers and the Centre Pompidou. This event is co-developed by Hexagram - International Network for Research-Creation in Arts, Culture and Technology - and the research-creation team of the international project Membranes in action: Multidisciplinary Creation of Sustainable Interfaces between Communities, Ecological Milieux and the Built Environment (Jarry, Bianchini, and Boucher).

The project is supported by the Social Sciences and Humanities Research Council of Canada (SSHRC); Concordia University (Milieux Institute for Arts, Culture and Technology); The Chaire arts & sciences of École polytechnique, École des Arts Décoratifs-PSL and the Daniel and Nina Carasso Foundation; and the support of the Institut français, the Consulat général de France à Québec and the Délégation générale du Québec à Paris.