Do you respect the fish? Does the fish respect you? 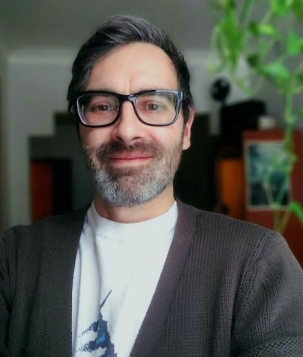 The Wendat worldview entails an ongoing acknowledgement and production of relationships, rooted in principles of equality, respect and reciprocity among all people and all elements of the natural world. It is an inherently ecological thinking for its concerns with balance and renewal, holding lessons – as in all Indigenous cultures on this continent – on the ethics of human activities in the Great Circle of life. The spiritual practices related to fishing in the ancient world of the Wendat Confederacy, near Georgian Bay, will serve as the main case study. Means of communication with fish spirits are recollected from community traditions as well as accounts in missionaries’ writings from the first half of the 17th c. Although they belong to the ‘symbolic’ universe, these practices are not symbolic in the way they are enacted and the purpose they serve; they are part of a contract with other beings that must be continuously lived and renewed.

Nicolas Renaud is a filmmaker and video installation artist who has been creating documentary and experimental work for the past 20 years, including the Hot Docs award winning film Brave New River (2013). His latest short film, Florent Vollant: I Dream in Innu, is a portrait of the legendary Innu musician and his relationship with the caribou.

He has also written and lectured about art, the media, colonialism, and Indigenous ecologies. From 2014 to 2020, he was a programmer for the film section of the Montréal International First Peoples Festival. He is an Assistant Professor in First Peoples Studies, in the School of Community and Public Affairs at Concordia University, and is part of the Indigenous Futures Research Centre. Nicolas Renaud is of mixed Québécois and Indigenous heritage and is a member of the Huron-Wendat First Nation of Wendake (QC).

Although this conference will be hosted online, most of the participants will be located in Tiohtià:ke (Montreal), on the unceded lands of the Kanien’kehá:ka Nation, one of the founding nations of the Haudenosaunee Confederacy. If you are not in Tiohtià:ke, you can find out whose land you are on here.

PARTICIPANTS ARE EXPECTED TO TREAT EACH OTHER WITH CONSIDERATION AND RESPECT. FOR THE DETAILED CODE OF CONDUCT, CLICK HERE.

Celebrating Indigenous Expertise in Sustainability is brought to you by the Loyola College for Diversity and Sustainability and the Loyola Sustainability Research Centre in collaboration with 4th Space, with the support of the Office of the Vice-President, Research and Graduate Studies; the Faculty of Arts and Science; the Canada Excellence Research Chair in Smart, Sustainable and Resilient Communities and Cities; the Youth Network Chair; the School of Community and Public Affairs and First Peoples Studies, the Science College, and the Departments of Applied Human Sciences, Biology; Communication Studies; Geography, Planning and Environment; History; Political Science and Sociology and Anthropology at Concordia University.