Andrew Carter comes out on top 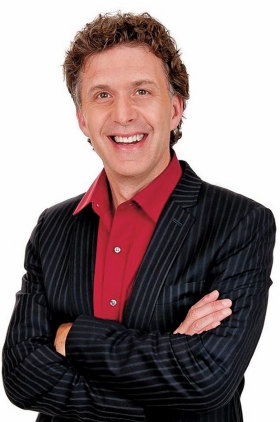 ‘Being a journalism student allowed me to intern at CJAD, and that’s how I got my foot in the door and my first job.’

Energetic radio personality Andrew Carter, BA 84, has been the morning man at CJAD – Montreal’s top-rated English-language AM radio station – since 2003.

But in 2017, Carter revealed on-air that he had been battling depression. Carter’s honest approach helped listeners get a handle on mental illness. Through it all, Carter never lost his good humour and remains one of Montreal’s favourite broadcasters.

Andrew Carter: Definitely getting up at 4 a.m. day after day after day. That’s the hardest physical part. The hardest mental part is what I call land mines: you can say something you think is fairly innocuous, but someone may not hear it as you intended and it can become an issue. You’re always one stupid phrase away from disaster. That can be kind of stressful.

The one I hear a lot is from people who have good voices, who come up to me and say, ‘My friends tell me I should be a radio announcer because I have such a great voice.’ And I say, ‘That’s like my friends telling me I should be lawyer because I look good in a suit.’ It’s not a talent, it’s an acquired skill. That’s what people don’t understand.

What was it like coming out publicly about your battle with depression?

It was quite easy because in the context of how it happened – with the Bell Let’s Talk mental health initiative – we had guests like cyclist and speedskater Clara Hughes and I felt kind of disingenuous sitting there asking them questions about depression when I knew how it felt to be depressed.

I felt like we were not giving full service by talking to the same athletes and celebrities. It’s regular folks who are still scared because of stigma. They are scared they will lose their jobs. It was even that way in my business too. I think going back just a few years it would have been very uncool to talk about depression.

I’m not saying that about Bell Media, but I’m sure some past bosses would have said that is not good for the Andrew Carter brand. It’s not good for the happy morning man to talk about depression. You’re not supposed to have any problems. So coming out was one of those things I did because it was right. I didn’t feel brave or special.

But I was touched when people came forward and said, ‘This is what I’ve been living.’ You get some hope knowing that you’re not the only one.

Volunteering at Concordia radio station CIRL [now CJLO] was great because it allowed me to play radio and understand and cultivate my desire to do radio. I was in communication studies and journalism – it was called a joint specialization at the time, a precursor to broadcast journalism – and I had great teachers like Lindsay Crysler and the late Dennis Murphy. Being a journalism student allowed me to intern at CJAD, and that’s how I got my foot in the door and my first job.

CJAD evening newscaster Stu McIsaac in 1982, when I had a week-long internship at the station. News director Gordon Sinclair said I could come back, but would have to make a deal with one of the newscasters. Stu McIsaac let me come in for as long as I wanted. He had tasks for me to do and he was very patient because I was a moron.

I was the guy least likely to excel, least likely to get a radio job ever! There are many other people who have influenced my career – Rob Braide gave me a chance as a morning man – but Stu McIsaac allowing me to stick around at the very beginning, that changed my life.