Graduate Perspectives is a series of blogposts about the John Molson School of Business graduate programs experience from the perspective of current students and alumni.

This week, Christina Paylan, MBA' 16, tells about her journey prior to, during and after completing the John Molson MBA. 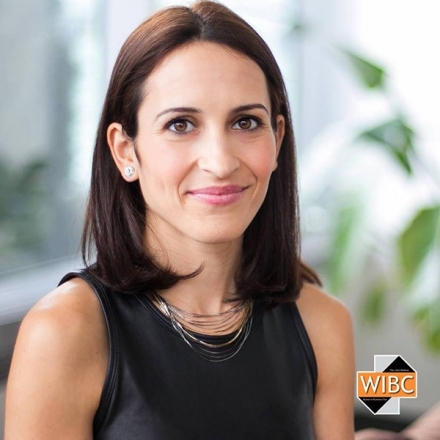 I started my career in media. My first job after graduating from Journalism school was as a Talk Show Producer for Corus Entertainment. It was a political news radio talk show and I met the Prime Minister (Stephen Harper at the time) two weeks into the job! I even managed to secure an interview with the Minister of National Defense for the show, which was harder than getting an interview with the Prime Minister, because this was during a year when the Minister wasn’t doing any media interviews. After 6 months of continuously following up with his communications team, my perseverance paid off and his communications director finally agreed to the interview. By the time I left that position, I had every federal minister’s director of communications in my phone contacts and had maintained a good relationship with them. It was all very surreal and exciting.

From there, I went on to work in music entertainment radio in Montreal for eight years where I would meet celebrities like Akon, Jason Derulo and Nick Carter from the Backstreet Boys. While it was fun, after 12 years in the broadcasting industry, I needed something else; something completely different. I wasn’t sure what, so I decided to go back to school for an MBA to learn about business management.

My first day in the John Molson MBA program, I was in the Molson Building elevator going up to the 6th floor for my first class. I was dressed in casual business attire and wanted to fit in, to belong. With me in the elevator were two guys talking about their stocks and market performance. I had no idea what they were talking about. Stock market? Stock prices, tickers? It all went over my head. I was lost. And very intimidated. I started having second thoughts and wondered: “What am I doing here? I don’t belong.” But I soon came to realize that I was exactly in the right place.

The MBA experience was a mix of in-class and out of class learning. Some of the lessons and experiences particularly marked me.

One of the best parts of the MBA is the training you get on presenting. I truly was a shy introvert when it came to presentations, but I knew that, if I wanted to grow in my career, this would be a skill I had to develop. My first MBA speaking opportunity was at a board meeting presentation held in a nice conference room in the Molson Building. I was the first to speak on behalf of my team and, when I did, this squeaky high-pitched voice came out of nowhere. I was so nervous! After a few minutes, I started feeling less nervous so my voice went back to normal for the rest of the presentation. But when we walked out at the end, one of my teammates came to me and very bluntly said: “What happened to your voice in there?” I was mortified! But that was the beginning of my transformation from being a shy, nervous speaker who avoided presentations to the person I was three years later, travelling to speak at international conferences in California, New York, Florida, and Toronto.

My second year in the program, I accepted the role of President of the John Molson Women in Business Club. What a ride that year! I thrived in this role; it was like all my joy, passion and skills came together. I took a group of the female MBA students to Harvard’s annual Women In Business Conference. With my team of wonderful executives, we organized our own Women In Business conference here in Montreal that hosted 100 attendees at the Centre Mont-Royal for an event we named “Breaking Boundaries”. My team and I organized a phenomenal event that yielded positive feedback for years. We had speakers like Lauren Rathmell, co-founder of Lufa Farms, and Caroline Ouellette, hockey Olympic gold medalist. Caroline was our keynote speaker and put the whole room to tears with her inspiring speech. 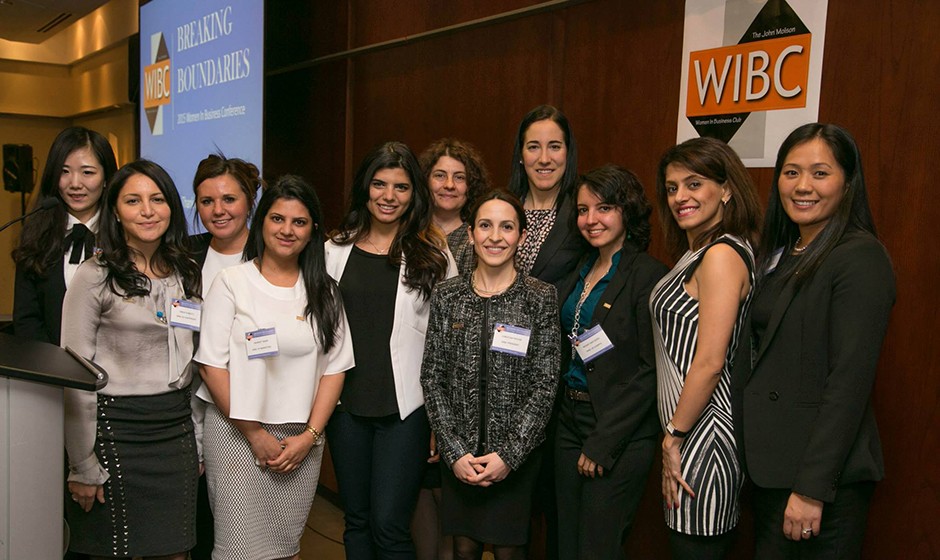 The Dean of the John Molson School of Business (Steve Harvey at the time) attended the conference and was so impressed that he spontaneously gave our club extra funding after the event. We didn’t ask for it and didn’t even need it because we were already finishing our year with a strong surplus, but it definitely helped the club in the following years and we were very grateful for the School’s generosity. Being President of this club was the leadership role of a lifetime.

In my last year, I participated in a bunch of case competitions. I travelled out of province for 3 of them while the rest were on campus. To any current or aspiring MBA reading this: do the case competitions! At least one, if not more. Case competitions really prepare you for real-world management roles. It’s all about teamwork, presentation skills, critical and creative thinking, brainstorming, and working efficiently under tight deadlines and high pressure. You learn to sound confident, even when you’re not sure you have the right answers.  Good or bad, this is the business world in a nutshell.

I chose to do a research project for some of my last course credits. I did the one-year, 6-credit project and, appropriately, decided to research women and leadership. I had Dr. Anne-Marie Croteau as my research supervisor. When I first approached her about being my supervisor, she kindly declined because management isn’t her field of expertise and she referred me to other faculty members who would be more appropriate. I wrote back and said, “I still want to work with you”. I had approached Dr. Croteau because I had heard great things about her. Still, I’m not sure what compelled me to focus solely on her like that, but I’m glad I did. She finally accepted! And so began our journey and working relationship that allowed us to get to know many women in leadership roles, learning about their backgrounds and life stories. This research continued for a while after I graduated; we were both so inspired by what we found in our research that we just kept going.

Two years into our work together, Dr. Croteau accepted Concordia University’s offer to become the next Dean of the John Molson School of Business, and the first female Dean of the school! Among the many other factors that brought her to that point in her career and that led her to take on this coveted role, she said that our research together inspired her and contributed to her taking the leap. If nothing else had happened for me during or after the MBA, the entire program was worth simply having contributed in some way to Dr. Croteau becoming Dean.

My MBA research on women and leadership spawned into a blog of my own. I started a women’s empowerment site called Glass Words where I share inspiring stories, images, quotes, and videos. With time, I added a finance section to discuss financial intelligence and increase financial literacy among women and men, girls and boys.

Once I left John Molson as a freshly minted MBA, I went to work for my parents while I processed the last three years and chose my next move. There, of course, I put all my new management skills to good use, but the family business, although quite interesting, was not my passion. I decided the next place for me to work would be in finance. I wanted to manage my money better and learn about investments. I wanted to truly understand the complexities of financial markets, grow my wealth and have good money habits.

So, I started my finance career as an independent financial advisor. Hello, imposter syndrome! But that didn’t matter because I was on a mission to learn as much as possible, as quickly as possible. Two months after embarking on this journey, COVID-19 hit. Trying to build a client base from scratch in a brand-new industry during a pandemic is like trying to dunk your very first basket with your eyes closed. It’s not completely impossible, but almost! At least that’s how it felt to me. But I kept going. After one year, I was managing almost $2 million in my book of business when an offer came in from Sun Life to join them as a financial consultant and that’s where I am now. Actually, now I’m on maternity leave, enjoying being a mom for the first time. This is a role that has taken me away from my career for the first time and given me time to reflect, leading to the perfect time to write about my MBA journey. 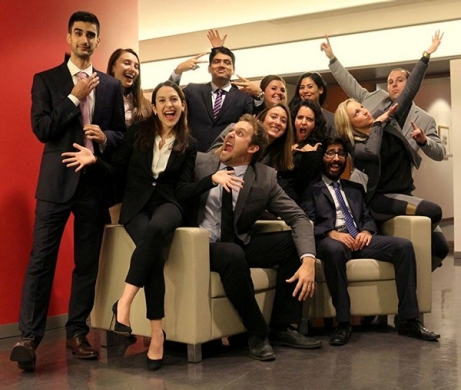 The MBA is not the one solution that will fix it all for you, professionally. It might be the beginning of a more empowered and refined you. Is it for everyone? No. It’s for those that are willing to give it their all. I was told at orientation: “You get from the MBA what you put into it.” Is that ever true! I gave it my all and it gave me the whole world in return. It was that feeling I used to have as a child, a feeling I started losing over time as an adult, that the whole world was my oyster and I could do anything. After the MBA, I once again felt invincible!

Honestly, all I was really hoping for was a nicer resumé and those three letters at the end of my name: MBA. I wasn’t expecting such an intense transformation.

For more information on the John Molson Full-time and Part-time MBA, visit our website. Then connect with a recruiter to ask a question or arrange a one-to-one meeting, or you can participate in one of our many online information sessions.

You can see other posts and videos made by the Case Competition Committee on MBA experiential-learning opportunities, as well as many other posts about our students in the MBA and other graduate business programs at the John Molson Graduate Blog landing page.