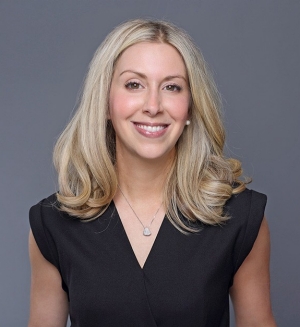 “No task is too small or unimportant. I will never say ‘that’s not my job.’ The more I take on, the more comprehensive my view of the business.”

As vice-president, business affairs at NBCUniversal, Orit Blankrot marries her legal education and love of broadcast to bring unscripted programming, such as the upcoming The Kelly Clarkson Show, to the airwaves.

The Montreal native got her first taste of life at 30 Rock (the nickname for NBC’s New York headquarters) through an internship at NBC’s newsmagazine Dateline during her third year of Concordia journalism.

A desire to live in New York steered Blankrot toward law school. After passing the bar, she was hired by a Manhattan law firm, but opted to take a sabbatical when the financial crisis hit and accepted a position as a media law clerk at NBC. A decade later she handles everything from talent negotiations to production agreements, digital initiatives and any other business or legal matters that might arise during the lifecycle of a series.

“From a deal-level, I’m involved from the very beginning. It’s a fun process…you have to be on your toes,” she says.

How Concordia helped her get her start

“I wouldn’t have been eligible for my Dateline internship had I not received college credit. That internship was instrumental to my career advancement. It helped me figure out that I loved television and taught me how a news program comes together.”

Professor who made a difference

“Peter Downie, who taught me radio and documentary filmmaking, really believed in me. He wrote my recommendation letter for law school and told me that I would be great at both journalism and law. He gave me a lot of hope and faith in my future at the time, and I’ll always be thankful for his influence.”

“Helping to launch an ad-supported video-on demand streaming service that NBC has a content and equity stake in. My work on that project contributed to my promotion to vice-president in 2017.”

“No task is too small or unimportant. I will never say ‘that’s not my job.’ The more I take on, the more comprehensive my view of the business.”