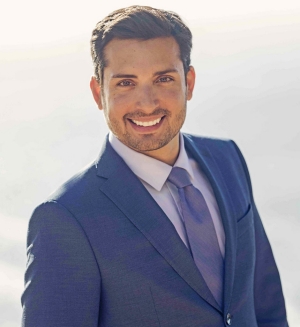 “Don't stay in the office because deals happen when you go outside.”

Hervé Larren has long seen the potential in blockchain technology, which is not only disrupting the financial world with Bitcoin and other cryptocurrencies. It has the potential to drive revolutionary changes in banking, supply chains, legal contracts and even humanitarian aid.

Larren left the French luxury goods conglomerate LVMH Louis Vuitton Moët Hennessy to found several Internet companies where he became an early adopter of Bitcoin, accepting it as a form of payment in 2014.

Larren is now a global expert in cryptocurrency and the blockchain technology that makes it possible. He is the co-founder of Global Crypto Ventures as well as a partner of Geneva-based blockchain advisory firm Dybaw. He has spoken in more than 10 countries on the subject of Bitcoin and blockchain and was selected as a keynote speaker at the 2018 World Technology Summit.

“It was a challenge to transition from working at a multinational company to entrepreneurship in technology because it forced me to have a different scope and mindset. I had to change the way my brain was wired when executing tasks.

On education and his Concordia degree

“I come from Paris, so having the chance to study in English was of real value when I moved to New York to do an MBA at Columbia Business School. Montreal is a large French speaking city, making it a good transition between both cities.”

“Don't stay in the office because deals happen when you go outside. People often don't see the value of waiting in someone’s lobby just to have a five-minute conversation, but it can make all the difference when it comes to building trust. Especially since we're working in such a connected world, in order to make deals happen, you have to spend time face-to-face, and that includes travelling internationally.”