What does the future hold for indigenous communities?

“We pulled together a group of people interested in thinking about how Indigenous communities were working with digital media,”  says Lewis, who is Concordia University Research Chair in Computational Media and the Indigenous Future Imaginary.

A sample of the network’s ongoing activities includes the Skins Workshops on Aboriginal Storytelling and Video Game Design, art production and artist residencies.

Then, three years ago, Lewis, Skawennati and a team of academics, artists and technologists got together to discuss the future of Aboriginal communities in Canada and the world. “We decided to develop a framework and structure to encourage Native individu- als and communities to think concretely about the future,” says Lewis, also professor in Concordia’s Department of Design and Computation Arts. “When we say ‘future,’ we don’t mean the next political mandate or even the next generation — we’re thinking seven generations out.”

The discussion would lead to the establishment of the Indigenous Futures research cluster at Concordia’s Milieux Institute for Arts, Culture and Technology, as well as the Initiative for Indigenous Futures, funded by a seven-year Social Sciences and Humanities Research Council of Canada (SSHRC) Partnership Grant.

“An indigenous way of thinking”

Founded in March 2016, the Indigenous Futures research cluster explores how Indigenous people are imagining the future of their families and communities through various narratives, frameworks and technologies. Lewis and Heather Igloliorte, assistant professor in the Department of Art History, serve as co-directors, and Skawennati acts as the partnership coordinator.

Whereas AbTeC focuses mostly on artists and research-creation from a First Nations context, the Indigenous Futures research cluster takes a multidisciplinary approach to the time to come. “It’s not just artists who have things to say about the future. There are lots of other people who are thinking about these things and we want to be in conversation with them,” Lewis explains.

The Indigenous Futures Research Cluster Presents is the latest initiative to try and spark those discussions. Described as a series of talks, performances, exhibitions and other public engagement activities, during the 2017-18 academic year it will include presentations by artists, performers, composers and academics. 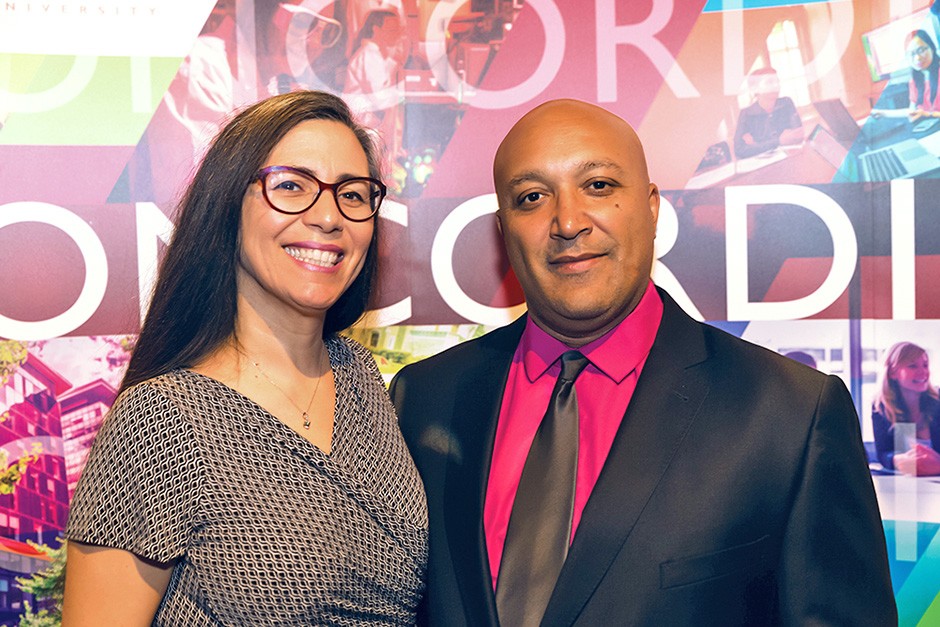 Lewis believes it essential to examine forward-looking work from multidisciplinary perspectives, especially when coming from an Indigenous context. “These clean divisions between science, engineering, art and the humanities are not clean at all,” he says.

Igloliorte agrees and draws parallels between the ways the research cluster and Indigenous communities operate in general. “Multidisciplinarity, or even non-disciplinarity, is an Indigenous way of thinking about the world,” she says. “It’s the way our research is going because it is a more holistic way of working. For me, it’s really satisfying to see how everything fits together.”

The initiative for indigenous futures

Most of the Concordia- based Indigenous Futures research cluster’s activities are currently focused on the broader Initiative for Indigenous Futures (IIF), a $2.5-million collaboration between universities, arts institutions, community organizations and industry partners in five provinces and territories. Among the project’s aims are to provide Aboriginal youth with critical cultural and digital media tools that empower them to craft a destiny of their own choosing, and to develop multiple visions of Indigenous peoples’ tomorrows.

Lewis is the principal investigator, while Skawennati and Igloliorte work as the IIF’s partnership coordinator and co-investigator, respectively. The project is funded by SSHRC until 2022 and made up of workshops, residencies, symposia and a media archive, including the Skins Workshops conducted by AbTeC.

“When we first started AbTeC, one of the questions was how do we get more people using this technology,” Lewis recalls. “We brainstormed a bunch of different ideas but we kept coming back to video games, because it was just clear to us that that’d be a much more attractive way of pulling everybody in.”

Based on the responses he’s received, Lewis thinks the workshops have been a success, especially when he considers that neither he nor Skawennati had any experience in video game design when they first started.

The activity’s storytelling element also ensures that what is designed usually stands out from typical video game fare. “We have elders come in and tell stories, and then we talk about why stories are important and how they are structured,” says Lewis. “The participants devise a story that they are going to use the video game to tell. They almost always take ingredients from different stories they’ve been telling and talking about and remixing them into an interactive form.”

The IIF residence program offers Indigenous artists, writers, activists and think- ers an opportunity to explore Indigenous futures at AbTeC headquarters in Concordia’s Engineering, Computer Science and Visual Arts Integrated Complex. Lewis jokes that the project offers residents so much leeway that they often do not believe what they are being asked. “They write a one-page proposal that includes a budget and if our committee feels confident that it’s a worthwhile venture, then they come and hopefully do some interesting work,” he says.

Scott Benesiinaabandan is the project’s long-term artist-in-residence. He pro- duced a virtual reality (VR) work, Blueberry Pie Under the Martian Sky, that was shown at Concordia’s Leonard and Bina Ellen Art Gallery in fall 2017. The exhibition, Owerà:ke Non Aié:nahne / Combler les espaces vides / Filling in the Blank Spaces, was a joint creative project by Lewis and Skawennati.

“The whole premise of the piece was looking at our communities 150 years into the future,” says Benesiinaabandan. The narrative nature of language is what served as his inspiration. “Language encapsulates all things. It is the most important piece of culture and determines how culture gets propagated into the future. Language is a foundational element,” he says.

The VR commission also marked the first time Benesiinaabandan worked with the medium. While he admits that the work is a per- sonal exploration of how he considers language, he hopes viewers take away a “visceral sense of being in a different world,” he says. “I use a lot of digital media, so this artwork was just another exploration into that. It was a great learning opportunity too, because now I have a background in VR.”

While Lewis is happy with the work the IIF and its partners are doing, he wants to expand the conversation to include members of the public. That is the idea behind the Symposium on the Future Imaginary, which wrapped up its third edition at the Winnipeg Art Gallery in December 2017.

“We’ve made a significant difference in growing that conversation through the symposium because each one is videotaped and posted online,” he says. “One of the big commitments we made at the beginning of the grant that gets carried out through the cluster is to record as much as we can and get it online so people can see it.”

Lewis is pleased the symposium has grown since it was first held in Toronto in 2015. Still, it is also clear that its success does not lie solely on the shoulders of the IIF team. “It’s not just because of what we’re doing,” he says. “There are other people who are doing work in what they call Indigenous Futurisms that are really helping break open the conversation.”

Both Lewis and Skawennati grew up with a love for science fiction. But after years and years of reading science fiction novels, they began to notice how few Indigenous people actually populate the genre.

This realization is what propelled Skawennati to ex- amine what lies ahead for First Nations people more closely. “I really felt I needed to do something useful and I couldn’t just make art that was pretty,” recalls Skawennati. “A lot of the Native art in the late ’90s was about being a victim and I wasn’t interested in being a victim.”

The first artwork in which she decidedly envisioned Indigenous people in the future was an online paper-doll/time-travel journal called Imagining Indians in the 25th Century. The project’s timeline takes place over a millennium and sees the main character visit 10 events over the course of that time. Skawennati cre- ated a different costume for the character to wear at each event, along with 10 separate journal entries.

The project is not only set in the future, though.

“I don’t want to pretend I’m a historian, but I’m an artist who does a good amount of historical research. Imagining Indians starts in 1490 — two years before the arrival of Christopher Columbus — and ends in 2490. It’s one millennium but only half of it is in the future,” Skawennati explains. 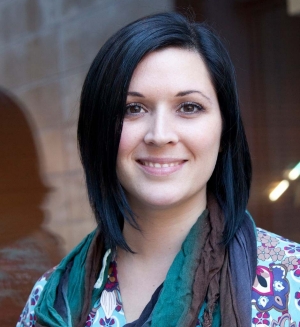 Heather Igloliorte is an assistant professor in the Department of Art History and co-director of the Indigenous Futures research cluster.

Igloliorte also likes science fiction literature and film, although her engagement with Indigenous futures came about after she realized that the Inuit were not taking on leadership roles in the art world. She is interested in both the distant and immediate futures for Inuit.

“Inuit art contributes $87.5 million to the Canadian economy annually, and still there are very few Inuit curators; there are no permanent museum staff, and few Inuit are even working with our collections,” Igloliorte says. “Here we have this vast artistic production by numerous artists — the highest percentage of artists per capita in the country — and yet there aren’t nearly enough Inuit leading that movement or writing our art history.”

Her involvement in the Indigenous Futures research cluster aligns with the group’s seven-generation principle, yet she also wants to keep an eye on the next decade to ensure the Inuit take charge of their artistic futures. “This is a very strange phenomenon to have in Canada,” she says. “What is the future of Inuit art if it’s not led by Inuit?”

For Benesiinaabandan, his interest in Indigenous futures started with the elders’ stories he heard as a child. “Even though I like science fiction, I’m not particularly driven by that,” he says. “When we talk to our elders, there’s always a consideration of the future. We are always talking about the future in one way or another.”

The Indigenous Futures research cluster is currently looking for students interested in doing archival work as well as postdoctoral fellows. Students are asked to contact Jason Edward Lewis at jason.lewis@concordia.ca for more information.