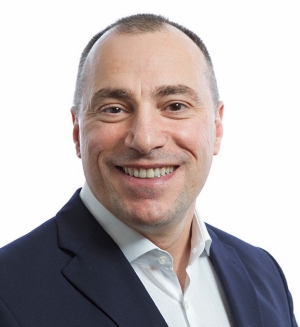 "Playing on the Stingers football team taught me a lot about teamwork, leadership and commitment."

When Dominic Porporino, BA 88, started working at a UPS warehouse while studying economics at Concordia, he imagined himself at a job in banking after graduation.

His plans changed when the multinational package delivery and supply chain management company offered him a position as a driver and then promoted him to supervisor.

After three decades and a number of roles across Canada and Europe, Porporino is now responsible for more than 12,000 employees as president of UPS Canada, a job he assumed a year ago.

What aspects of your career at UPS have meant the most to you?

Dominic Porporino: What stands out most about the whole journey is being able to live in different parts of the country, travel all over Europe and see places that I never thought I’d be able to see, and meet people and make friendships.

How did Concordia influence your career?

DP: My time at Concordia helped to build the foundation of who I am. I played football at Concordia until my third year. The entire team was a pretty tight group and having that support structure was great. Playing on the Stingers taught me a lot about teamwork, leadership and commitment. These are skills that make you successful in life.

Who is someone that inspired you?

My father was always a great inspiration for me. He came from Italy and didn’t bring much with him but was able to support me and my nine siblings. I was always inspired by his work ethic.

What is the highlight of your career?

As a Canadian, it meant a lot for me to return from Europe to become president of UPS Canada because as a multinational company we’re moving people all over the world. It doesn't happen very often that a home-bred employee gets to lead the country.

What was the biggest challenge of your career?

When I first moved away from Montreal in 1999, it was a difficult decision for me to leave my parents and my siblings behind to go across the country to Vancouver. I’ve been traveling pretty much my entire career since then. It’s been a big challenge trying to maintain those ties. I wanted a career but also wanted to cherish my family and friends.

On the other hand, had I not left Montreal, I wouldn’t have had the experiences I did and grow as a person because of them.

What advice would you offer to current Concordia students?

The piece of advice that stands out for me is to be genuine and if you say you’re going to do something you make sure you do it.

Being genuine doesn’t mean going into a boardroom and picking a fight or acting in an unprofessional manner. I’ve never gotten myself into trouble for speaking from the heart and sharing my point of view about what I think is right.