Aaron Hancox can't get enough of the bond between humans and their feline friends. The proof? His show-circuit extravaganza Catwalk went viral in January – and he's already planning a follow-up
|
By Maeve Haldane
Source: Advancement and Alumni Relations 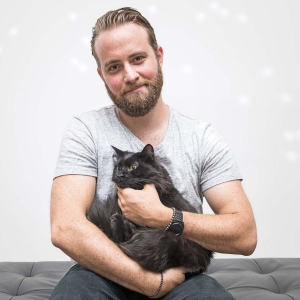 His film Catwalk: Tales From the Cat Show Circuit, was "Twitter's new streaming obsession". As GQ noted, it could have been "75 minutes of laughing at fancy felines," but instead "it's so much more"... [Curious? You can watch it now on CBC Docs POV.]

The documentary, which chronicles a season of competitive cat shows, was released last year in Canada and internationally; it also streamed on Netflix to acclaim and great amusement. Hancox co-directed the project for Markham Street Films, where he’s vice-president of unscripted development and production.

Hancox embraces his role as a cat man, though his first cat experience was tragic. As a small child in Hudson, Que., his parents let him bring home an adorable kitty only to discover he was terribly allergic. “If you ever want to experience sheer misery, take a kitten away from a five-year-old,” Hancox says.

As an adult he lived with two cats that were a package deal with a now ex-girlfriend. The allergies were no more. After the relationship ended, Hancox felt a feline void in his life.

“These animals had done so much for me and my own well being and happiness,” he says. Nine months later, he adopted a kitten from Toronto Cat Rescue, the sociable Prince Beau Hancox, who fetches, knows his own name and will greet newcomers by jumping on their shoulders. Beau will also try to help the cable guy fix things.

And after acquiring Beau, Hancox’s life satisfaction expanded even further with a now-fiancé. “And I have now converted her into a cat person, too. She loves Beau!” he says.

Despite Beau’s charm, Hancox will not be bringing him to a cat show. The creatures in Catwalk are no ordinary beasts, but have been exposed since kittenhood to the hectic, noisy, echo-filled, multi-smelled environment that is a show hall.

“These are supermodel cats. They are celebrities —  stars that are used to showing off.”

Cats keep Hancox grounded, and he points out that they are recently domesticated compared with dogs. “It’s rather profound that an animal that is really still quite wild would want to coexist with us. And accept our love and give it back in return,” he muses.

A positive trend in masculinity

Markham Street Films is developing a project on what Hancox likes to call “the rise of the cat man in pop culture,” which looks at men publicly embracing their love of cats. Hancox sees this as a positive trend in masculinity.

Watch the trailer for Catwalk: Tales From the Cat Show Circuit.

Cats are conventionally seen as a woman’s pet, seeded by the association of cats with witches, and the notion that graceful movements are feline and female. But cats are also hunters — a stereotypically male pursuit — and have always been mates of men, too. They were first domesticated by grain farmers for rodent control, and accompanied sailors to protect their cargo and food, which is how such cats were brought to North America.

“Our society loves to assign a gender to things,” Hancox notes.  “It’s refreshing to see a lot of men, including a lot of quote-unquote macho men, embracing cats for the first time.”

Making documentary films is one way to learn a lot about a subject in just months. Thanks to Markham Street Films’ Ice, Sweat and Tears Hancox is well versed on figure skating. He’s a big fan and advocate for pugs because of his work on, Pugly: a Pug’s Life and of course, he now knows more about cat shows than he ever imagined.

Fitting for a documentary filmmaker, Hancox has “about a zillion passions.” He’s taken courses in welding, new languages, various instruments; loves cooking and is an avid amateur boxer. “If you ask anybody who knows me they always laugh, ‘Oh what is Aaron’s latest hobby,’” he says.

Hancox credits Concordia with not only teaching him how to create films, but also how to think critically about his own work and that of others. “I spent four incredible years at the Department of Communication Studies, making great friends and future colleagues.”

“I’m very fortunate to be doing what I’m doing and to be making projects that I’m both passionate about and proud of, that seem to be striking a chord with people,” he says. “I’m very lucky.”