From humble beginnings, Dominic D’Alessandro rose to the top of the Canadian banking and financial services industry. He retired as CEO of Manulife Financial in 2009.

“‘Why don’t you skate, Dad? Why don’t you swim?’ my children would ask me when they were young,” says Dominic D’Alessandro, BSc 67, LLD 98. “When I was a little boy, we didn’t have much. Life was tough, but everybody we knew was in the same situation.”

Life changed radically for D’Alessandro after he graduated from Loyola College, one of Concordia’s founding institutions. He has given back to his alma mater a total of more than $1 million toward the Campaign for Concordia: Next-Gen. Now.

From a difficult start, propelled to success

Growing up in Montreal’s Little Burgundy neighbourhood in the 1950s wasn’t easy. His father died when he was seven, four years after the family immigrated to Canada from Italy. His 14-year-old brother went to work delivering bread to support the family. His mother raised four children alone.

D’Alessandro beat the odds and went on to become one of Canada’s most prominent business leaders.

He built an impressive business career, working internationally, then returning home to join the Royal Bank of Canada as assistant controller. Five years later, at age 37, he became the bank’s chief financial officer and its youngest-ever executive vice-president. He later became president at Laurentian Bank, where he was briefly Canada’s highest-paid banker. He went on to lead Manulife Financial and is credited with transforming it into Canada’s largest public life insurance company.

D’Alessandro remembers sitting in his Royal Bank office on the 41st floor of Montreal’s Place Ville Marie — with its private dining room — looking down over the city. “I could see Notre-Dame and Des Seigneurs streets, where I grew up. As a child, I would accompany my mother to the bank. She couldn’t speak English and was a little awed by the teller behind the grill. I’d come a long way since then — I’m glad my mother lived long enough to see my success. She was very proud.”

The recipient of numerous awards, he was named an officer of the Order of Canada in 2003 and Canada’s Outstanding CEO of the Year in 2002. D’Alessandro achieved everything he wanted in his professional life, yet he never lost sight of his roots. 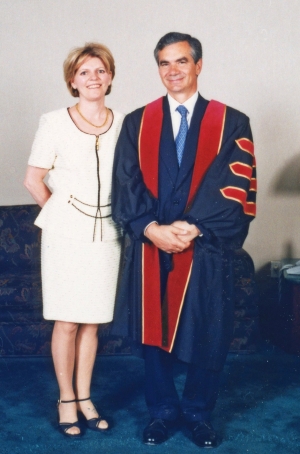 Dominic D’Alessandro and his wife, Pearl, at his Concordia honorary degree ceremony in 1998.

The young D’Alessandro was a bright student with a natural ability in school. And he loved to read. He skipped two grades and at age 14, enrolled at Loyola College, studying math and physics. “It was a memorable time, even though it was difficult at home,” D’Alessandro says. He dropped out of school for a year at age 17, until one of his professors, Fr. Aloysius McPhee, contacted him.

“Father McPhee made an impression on me that he cared, and so I took his advice to return to my studies. Who knows what I’d be doing now if it weren’t for him.” D’Alessandro is grateful to his alma mater for setting the course for his success. His degree opened doors. It was also during his Loyola years that he met his wife of 51 years, Pearl.

Through his giving to Concordia, he created the Dominic D’Alessandro Fellowship Fund to support master’s and doctoral students in research-oriented programs.

“I want to make it easier for deserving students who have an appetite to learn. I believe in education — it makes better citizens and better human beings of us all by helping us to understand the world around us. Frankly, I think education is the best investment,” says D’Alessandro.

“It’s wonderful to see the presence and the impact Concordia is having on the city. I think universities are tremendous assets for society and for a community.”

D’Alessandro’s commitment to Concordia extends beyond his philanthropy. He has served on the university’s Board of Governors and now volunteers as honorary vice-chair for the Campaign for Concordia. Next-Gen. Now.

“As a proud Concordia graduate and long-time volunteer, Dominic D’Alessandro embodies the Jesuit and Loyola College ethos to be a ‘man for others,’ ” says Concordia President Alan Shepard. “Dominic was an astute businessman who worked hard to succeed. He is generously giving of his time and resources to support our next generation of students.”

“We are grateful to Dominic for his gifts and his leadership on our campaign cabinet and in community organizations,” says Paul Chesser, Concordia’s vice-president of advancement. “It is thanks to such dedicated volunteers that we are making sustained progress toward our $250-million campaign goal — and advancing our position as Canada’s next-generation university.”

In recognition of D’Alessandro’s achievements, he received an honorary doctorate from Concordia in 1998 and the Loyola Medal in 2004. “I’m very proud of who I am and where I come from. I’ve been fortunate — I’m the son of an immigrant labourer and I ended up on a first-name basis with prime ministers and presidents.”

‘If you can help somebody, why wouldn’t you?’

“I’m especially proud that I haven’t lost my values. I remember what it’s like to be disadvantaged,” he says. “I had a hard time as a kid and today I believe that if you can help somebody, why wouldn’t you?”

D’Alessandro directs his philanthropic support toward numerous causes related to education and health. Over the years, he has served in volunteer roles for a variety of charities including the United Way and Montreal Neurological Institute and Hospital.

Retired since 2009, he sits on several corporate boards and enjoys travelling, playing golf and spending time with his family. Reading remains a great passion. Below D’Alessandro’s yearbook photo are these words: “There is the feeling among us all that he will make it in life in a very big way.” Prophetic words indeed.