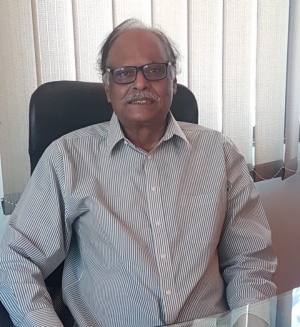 Owais Uddin Ahmed at his home in Karachi, Pakistan.

A young woman pleading for food for herself and her neighbours, a father who took his own life after his children hadn’t eaten in five days, crowds begging for something to eat on the streets.

“There is so much suffering in Karachi and Pakistan,” says businessman Owais Uddin Ahmed, attendee. “People are dying — not from the coronavirus but from starvation.”

Pakistan has less than 1,000 deaths from COVID-19. But 30 per cent of its 220 million people are living in extreme poverty and staving off hunger has become the primary concern for millions who have had to forgo their wages.

Ahmed, a commerce student in the late 1970s, says he felt compelled to help the destitute. But how? His own savings were meagre. Due to poor health, two years ago he was forced to close a factory he owned which manufactured parts for tractor trucks and buses.

‘I could see the guiding light’

Ahmed grew despondent, feeling physically and financially unable to alleviate the growing need for food. In desperation, he suddenly recalled two things that changed his path: his days as an impoverished student at Concordia and a verse from the Qur’an about how saving the life of one person is akin to saving humanity.

“Now I could see the guiding light,” says Ahmed, who decided to sell some assets to finance bulk grocery purchases for vulnerable families.

In discussing the issue with his wife, Farina, and their 12-year-old son, Ali Ahmed Shams, the family came up with a plan. They decided to live as frugally as possible. For Ali, that meant no new gadgets or clothes and they agreed Ahmed would sell his shares in the stock market to generate cash.

For health reasons, Ahmed can’t be on the front lines, so he enlisted a few like-minded people, including human-rights worker Seema Rana Maheshwary.

His team was on the ground as of April 1, identifying where needs were most dire and distributing bags of groceries, each weighing up to 24 kilograms and containing staples like flour, rice, sugar, pulses, oil and seasonings.

Multiple precincts of Pakistan’s largest metropolis received shipments of food, which were distributed among Hindus, Christians and Muslims alike. The groceries have helped more than a thousand families survive the pandemic.

“Ahmed is a very kind-hearted man and a spiritual mentor,” says Maheshwary.

As an international student at Concordia in 1975, Ahmed fell ill and soon found himself behind on his tuition payments. He later had to rush back to Karachi, three credits shy of his degree, to help his ailing mother. He has never forgotten the kindness shown to him by the Concordia community throughout this period of hardship.

In an extraordinary note of appreciation five years ago, Ahmed wrote about the university’s impact on his life. “Concordia helped me stay alive during this time and I credit my university with helping me become who I am today.”

As a Karachi businessman, he has sponsored the education of dozens of children from marginalized families, including many from a segment of Pakistani society living in ghettos away from the general population.

During the pandemic lockdown, some welfare organizations have refused to distribute the bare necessities to people of minority faiths, Maheshwary notes. In contrast, Ahmed’s philanthropic criteria specifies “no religion, no caste, no creed, no gender or any discrimination of whatsoever nature.”

“This work will go on until God wants it to stop.”